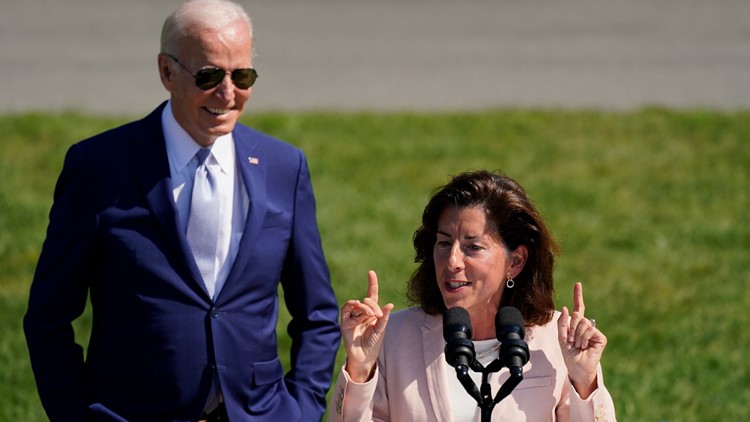 The government selected the 21 winners from 529 applicants who applied for grants that were part of the $1.9 trillion coronavirus relief package.

WASHINGTON — President Joe Biden and Secretary of Commerce Gina Raimondo on Friday announced $1 billion in federal grants for manufacturing, clean energy, agriculture, biotechnology and other sectors that will go to 21 regional partnerships.

The winners were selected from 529 first-time applicants vying for grants that were part of last year’s $1.9 trillion coronavirus relief package. The Biden administration has repeatedly envisioned an economy that is more self-sufficient and fueled by high-tech manufacturing and renewable energy development.

Unlike much of the pandemic aid, which was intended to meet immediate needs, the $1 billion grants are part of a longer-term effort to revitalize parts of the country that will provide economic boost for existing industries and capital for new ones companies needed. The mission is personal for Raimondo, whose father lost his job at a watch factory in Rhode Island. She said the grants are the largest ever made available by the Department of Commerce for local economic development.

The grants include $65.1 million in California to improve agricultural production and $25 million for a robotics cluster in Nebraska. Georgia gets $65 million for artificial intelligence. There is $63.7 million to develop lithium-based batteries in New York. West Virginia coal districts would receive $62.8 million to help convert to solar power and find new uses for abandoned mines.

Raimondo said the winners were chosen on merit rather than politics. She estimates that the investments, provided in payback over five years, will result in at least 100,000 jobs.

Solid Republican states like Oklahoma and South Dakota have received funding, and money is also flowing ahead of November’s midterm elections to political battlegrounds that could decide Congressional control. There’s $44 million for regenerative medicine in New Hampshire, where Democrat Maggie Hassan is defending her seat in the US Senate. Pennsylvania, which has an open Senate seat, is set to get $62.7 million for robotics and artificial intelligence.

The massive amount of coronavirus aid early in President Joe Biden’s administration helped accelerate job growth as the US recovered from the pandemic. But the hiring has been accompanied by a surge in inflation, which hit a 40-year high this summer, shattering consumer sentiment and putting the government on the defensive to show how its policies are helping the economy.

Although much of the coronavirus money has been paid out, the administration has said it needs more money to contain the disease and its variations. Biden unsuccessfully tried to get $22.5 billion from Congress to fight and prevent outbreaks, a figure lawmakers negotiated reduced to $10 billion. But additional funds were never passed by Congress despite confirmed cases now averaging about 90,000 daily.

White House press secretary Karine Jean-Pierre tried to minimize the lack of funding after the Food and Drug Administration approved modified boosters of the vaccines on Wednesday. Jean-Pierre said booster shots would be available after the Labor Day holiday as the administration had worked with local partners.

Still, the economic development grants suggest the relief package could have a multi-decade impact beyond the COVID-19 pandemic. The New Orleans area will receive $50 million to use wind-generated hydrogen that produces zero carbon emissions, a significant change in Louisiana, a state that has long been dependent on fossil fuels.

“With clean hydrogen, we can remain an energy state — but become an energy state of the future with less impact on the environment,” said Michael Hecht, president and CEO of Greater New Orleans Inc., a nonprofit economic development organization. “When money and morals come together, you get things done.”

City of Manchester (New Hampshire): $44 million for The BioFabrication Cluster

The University of Texas at El Paso (Texas): $40 million for the West Texas A&D Cluster