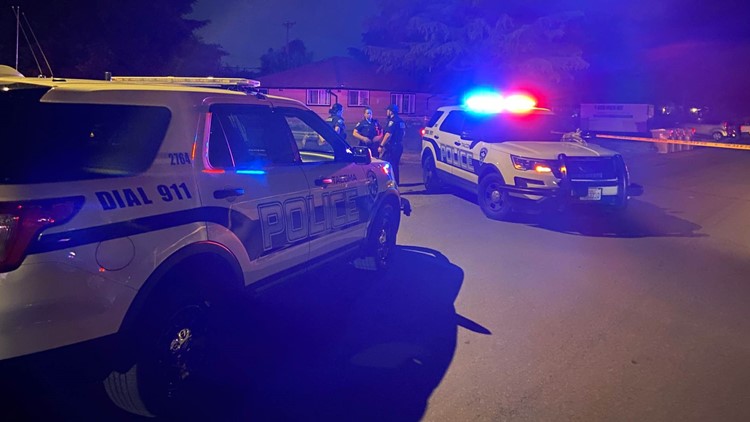 One person was killed and four others injured in a shooting at a home in Tacoma Sunday night. Police said there was no further danger to the community.

TACOMA, Wash. — A 38-year-old man was killed and four others wounded in a shooting at a home in Tacoma Sunday night.

According to that Tacoma Police Department (TPD), 911 dispatchers received a call about 10:35 p.m. about a shooting in the 900 block of East 52nd Street. The TPD said an additional caller informed dispatchers that there were two suspects shooting and one was still at the scene.

When officers arrived, they found an unresponsive man in the backyard of the home. The 38-year-old man was pronounced dead at the scene by the Tacoma Fire Department.

As officers responded to the front of the residence, a 34-year-old man walked outside with a gunshot wound and collapsed, according to police. Officials tried to provide assistance to the man when he became “combative.” The man was arrested and taken to hospital with serious injuries.

A 35-year-old woman who lived at the home and was married to the 38-year-old victim was also shot. The woman was taken to the hospital with life-threatening injuries.

A 28-year-old, who was also shot at the residence, was taken to the hospital in a private vehicle when the driver stopped near 48th and Portland. The driver called 911 and told dispatchers he was coming from the residence and that a man in the vehicle had been shot and asked for medical assistance to their location. The 28-year-old was taken to the hospital by ambulance with life-threatening injuries.

A woman and three young children were in the home at the time of the shooting, but Haddow said they were “unharmed and safe.”

Anyone with information is asked to call CrimeStoppers at 1-800-222-TIPS.

Eight shooting victims were identified Sunday morning after a large crowd attended a rave on the South Tacoma Way, the authorities said Tacoma Police Department (TPD). Police said all eight victims of the shooting are in stable condition. The victims are between 17 and 22 years old.

Investigators said an argument broke out in an alleyway along the 5400 block of South Tacoma Way behind the private venue where the rave was taking place when shots were fired.

There have been 13 gunshot victims in Tacoma in the past 24 hours.

“This is just one day, you can’t judge any of the other days by just a 24 or 48 hour period,” Haddows said. The officers are out on the street and we will deal with them, one by one, and solve them as soon as possible.”

From under to on the rocks: Invasive crabs become whiskey