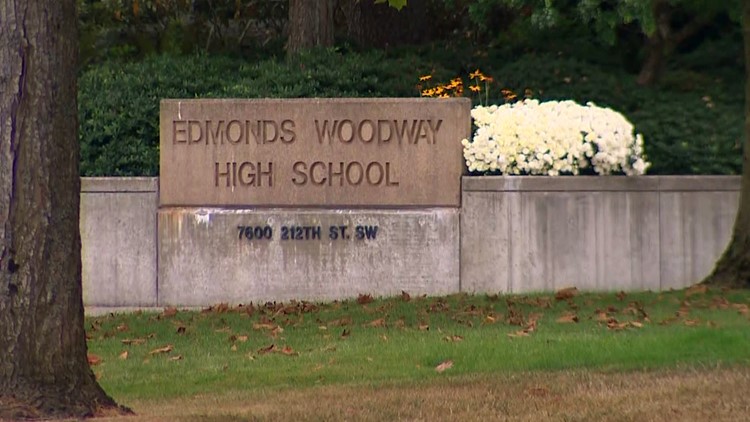 Edmonds Police said officers were notified that the 15-year-old had brought a loaded gun to school “thanks to a tip” from another student.

EDMONDS, Wash. — A 15-year-old student at Edmonds-Woodway High School was arrested Thursday afternoon after bringing a loaded .40 caliber handgun to the school.

Officers reported to the school around 1:15 p.m. after a student reported a potential weapon on campus to a staff member. According to Edmonds Police Department (EPD) chief Michelle Bennett, the employee alerted the principal to the threat, who immediately called 911.

Bennett said officers arrived at the school within minutes of the 911 call and began formulating a plan with school officials.

A team of officers then went to the classroom where the 15-year-old student was. EDV Sgt. Josh McClure said there were between 25 and 30 students in the classroom at the time.

As responding officers walked into the classroom, McClure said the principal made an announcement and placed the school on a modified lockdown, urging teachers to keep students in their classrooms. Immediately after the announcement, officers entered the classroom with a school employee, took the student into custody without incident, and escorted him out of the room.

A loaded Glock .40 caliber was found on the student. McClure said the serial number was scraped off the recovered pistol. How the student got his gun is not known at this time.

The school suspension was lifted shortly after the student’s arrest.

“We were able to act because the students reached out to the school staff,” McClure said during a news conference Thursday. “That’s the most important thing we should take with us today. Children came forward and said something.”

No students or staff were injured in the incident.

In all, McClure said it was “just 22 minutes” since the call was made until the 15-year-old student was taken into custody.

Officers stayed at the school after the 15-year-old was arrested to talk to students about what happened and to answer questions. Students were also told they could call their parents to let them know they were fine, McClure said.

“This incident is a wonderful example of how something that could have gone horribly wrong could actually have been prevented,” said Edmonds Mayor Mike Nelson. “I would like to thank the student or students who came forward and acted swiftly and decisively.”

“We are so grateful that none of our students or staff were physically injured in this incident,” said Edmonds School District spokeswoman Harmony Weinberg. “Officials have been working to come up with a plan to do everything possible to ensure the safety of all our students and staff and we want to thank them for that. Her quick work, professionalism and deep concern for our students and staff was felt by everyone involved in this incident. The District would like to give a special thank you to the few officers who stayed behind to speak to the students in that particular classroom. That went far.”

Weinberg said the school district is continuing to work with the police department on the investigation, adding that “all required discipline from the state will take place.”

It is currently unknown if the student threatened anyone before bringing the loaded gun to school.

Thanks to a tip from a student, we arrested a 15-year-old man from Edmonds-Woodway High School who was in a classroom armed with a handgun. There are no injuries and a temporary lockdown has been lifted. More information will be released as needed. pic.twitter.com/rU9rWZSOym