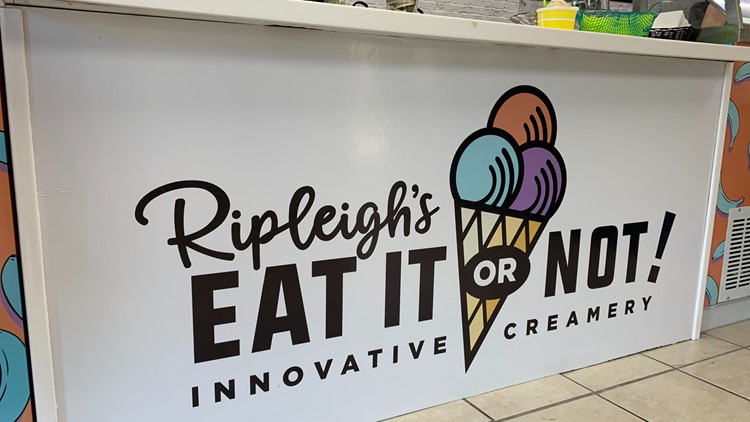 A teenage girl in Adams County doesn’t let obstacles like inflation and rising fuel costs stop her from pursuing her dream.

MCSHERRYSTOWN, Pa. – Ripleigh Maring is like any other teenager who works at her local ice cream shop, except she doesn’t just work at the McSherrystown store, she owns it.

“It started with an idea, we took the idea and made it happen,” Maring said.

The idea was inspired by her family’s love of travel and dessert.

“I’ve been to Tokyo, I’ve been to Greece, you wouldn’t believe how many crazy ice cream flavors and sweet treats we see,” Maring said.

With a little help from her mother, who is also an entrepreneur, the 15-year-old Catholic student from Delone has turned her passions into a trendy business offering Instagram-worthy treats and dozens of “innovative” flavors.

“We just made it up, it just happens,” Maring said. “Like Flamin’ Hot Cheetos, oh my god, avocado, wait, tangy pineapple avocado. It just works.”

The dozens of flavors inspired the store’s name, “Ripleigh’s Eat It or Not.”

“Of course there’s ‘Ripley’s Believe It or Not,’ so let’s say ‘Eat It or Not,’ we’ve got some crazy flavors, it just works perfectly,” Maring said.

Amidst inflation and soaring gas prices, Maring quickly learns the challenges of being a company.

“Like avocados, they’ve skyrocketed and almost tripled in price, so we’re like, ‘Okay, maybe we’ll sell out for a while, but we’ll find other places,'” Maring explained. “We try to avoid obstacles, find other things in the meantime. ‘Oh, if we don’t have that, why don’t we try?’”

While many other companies struggle to find staff, she has had no problem recruiting friends to join her team.

“We’re having a good time, we have good chemistry,” Maring said. “If we accidentally bump into each other, we just say ‘okay, never mind’, it makes the workplace much livelier and friendlier.”

Customers say they like the ice cream and appreciate the staff

“They’re doing great,” said Roger Hollenbaugh of Gettysburg. “The guys they have behind the counter I think are all sophomores too, it’s great.”

She is also working on opening the company’s flagship store in Emmitsburg, Maryland.

USPS will be closed June 20 in observance of Juneteenth

Lightning, killer floods and even snow: The real L.A story has weather drama

Made In America 2022: Show returns to the Ben Franklin Parkway in Philadelphia