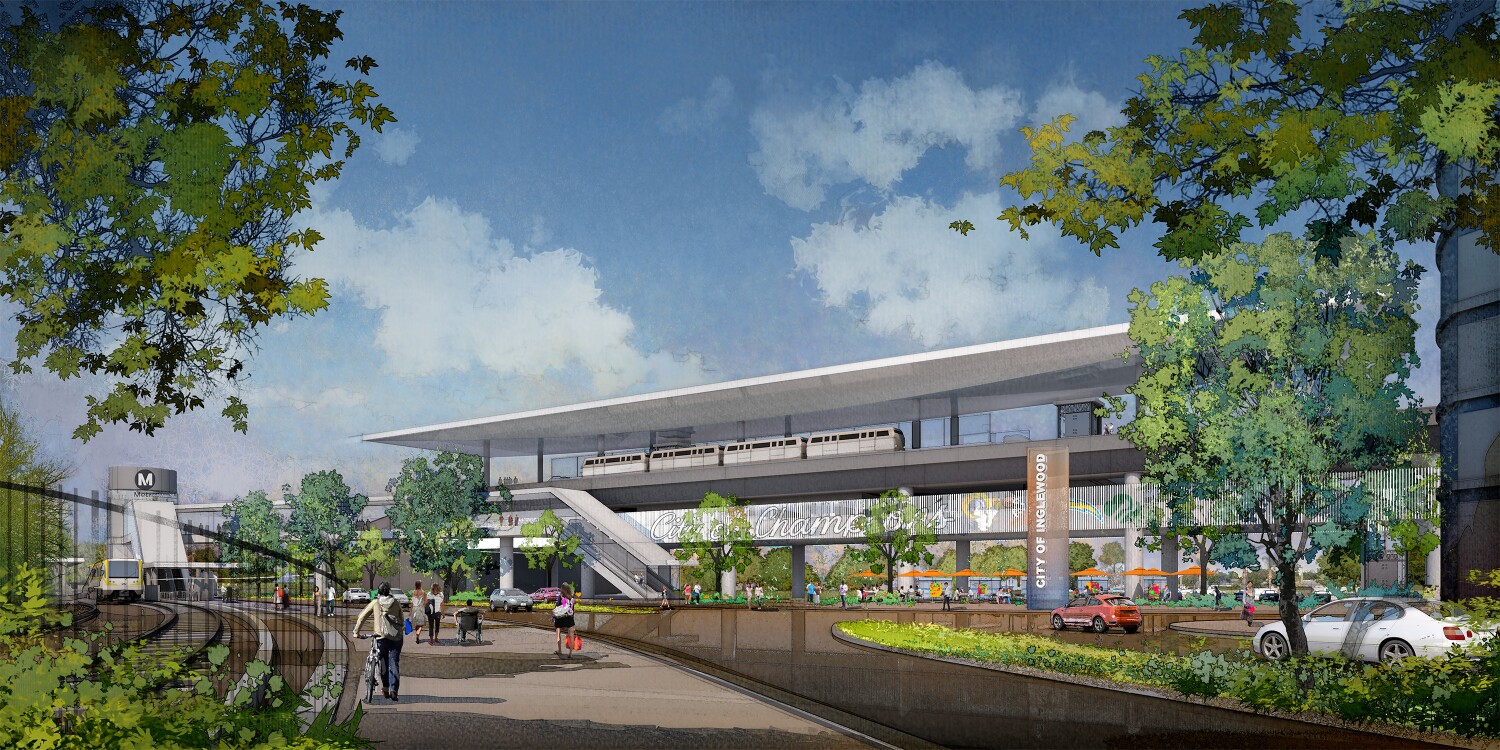 A new $1.4 billion electric people mover above the streets of Inglewood would carry spectators past the Forum to the opening ceremony of the 2028 Summer Olympics at SoFi Stadium. Miles of new bike lanes, more bus lanes and new bike communities would emerge across the region.

If planners and political leaders pull it off, spectators at the 2028 Olympics would experience a very different Los Angeles than what traffic-weary commuters know today, one that would endure well beyond the Games.

The organizers want the more than one million spectators who will come to the region for the 17-day Olympics to ditch their cars and use public transport, walk or bike to get to the venues. That’s a tall order for a sprawling city famed for its freeways, smog, and traffic jams. And it will likely require billions of dollars to fill gaps in the public transit system.

Los Angeles County’s Metropolitan Transportation Authority is already in a construction blitz with a subway extension to the Westside, a light rail line in south Los Angeles, and an underground link connecting several rail lines below downtown. But if Olympic transit planners are to meet their goals, more projects are likely to be needed to see a significant move away from the car.

“Can we achieve the vision? We believe we can,” said Ernesto Chaves, who has led the Metropolitan Transportation Authority’s efforts in formulating plans for the Olympics.

The Olympic organizers are still in the process of drawing up a transport plan. However, with federal and state agencies spending record amounts on projects stemming from President Biden’s $1 trillion infrastructure bill, local planners have a number of proposals for the Olympics.

A Metro task force has identified more than 200 projects that could help support the Games: a people mover in Inglewood, an extension of the C line (formerly the green line) from Redondo Beach Station to Torrance, a rail line through the east of the San Fernando Valley, a cybersecurity update for the Metro system, new protected bike lanes across the region, and more bike-sharing programs.

Many of the projects were already on the books but were not fully funded or years or even decades ago. Other proposals include adding toilets to subway stations, improving bus service and paying people who don’t drive their cars during games.

If anything, the Olympics bring urgency — a 2028 deadline — to nudge lawmakers into expediting an arduous process. “We may take advantage of the Olympics,” said US Senator Alex Padilla (D-Calif.). “But these are all infrastructure investments. The region will benefit from this for many years to come.”

Not all of these projects will make it. LA28, the private committee responsible for running the Games, has predicted it will cost $6.9 billion without infrastructure improvements. And big Olympics-related projects have been controversial, forcing some host cities – including Tokyo in 2021 and Rio de Janeiro in 2016 – to run massive deficits.

The task force — working with LA28, the City of Los Angeles and other transportation agencies — will decide on a list of transit projects by the end of the year that will be used to obtain available federal and state funding.

This week Padilla introduced legislation that would allow the US Department of Transportation to prioritize grant funding for Olympic projects and help with planning, capital and other resources. Rep. Julia Brownley (D-Westlake Village) introduced similar legislation in the House of Representatives last month.

“The city of Los Angeles, the state of California and the United States will be in the spotlight when the 2028 Olympics take place. So it’s not just a point of national pride, but the whole country has an interest in it,” Padilla said.

Both bills, which LA28 helped draft, would allow the Department of Transportation to fund temporary facilities, equipment, operations and maintenance. It could also fund additional buses and even the people mover.

Olympics organizers say the LA Games bid doesn’t require new transportation infrastructure, but they welcome it if it would improve the city in the long term.

“If the upcoming Olympics can be a catalyst to speed things up that’s kind of at stake, we’re all for it,” said LA28 chairman Casey Wasserman. “But we don’t want to be the reason and the only reason why it’s coming.”

Infrastructure is often one of the most important considerations for the International Olympic Committee when selecting a host city. While Los Angeles won its bid with no promise of massive capital projects like new arenas, local officials want to build infrastructure that the world would see and serve the region for decades to come.

Critics have raised questions about the federal government allocating billions of dollars to the city.

“Why would senators from the other 49 states want to divert more money to California just because California is hosting the Olympics?” asked Andrew Zimbalist, an economist at Smith College in Massachusetts and a frequent critic of the Olympic movement.

“The US government will already pay 90% or more of the security bill, which is likely to total $2 billion. And that’s commonly understood as the extent of their involvement, but it’s quite a large involvement.”

The idea of ​​expediting projects that would otherwise have been in the queue for years arose shortly after Los Angeles won the Olympic bid. At the time, Mayor Eric Garcetti announced “28 for 2028,” a list of transportation projects — most already in the works — to be completed before the Olympic flame is lit. The subway extension, light rail tunnel and siding, and bike path along the LA River were part of this 28th

Those projects are now on the task force’s list, which has dozens of smaller projects near likely key venues like SoFi Stadium, UCLA and the Rose Bowl.

Organizers have yet to develop logistical plans to transport thousands of athletes across the region to dozens of venues using an Olympic fleet.

Chaves said the organizers’ biggest benefit is the technology to see traffic in real time and the sheer growth of the transportation system. When Los Angeles hosted the 1984 Olympics, no subway or rail lines ran through the city. Motorways were still being built. Nevertheless, the planners succeeded in relieving traffic with more buses, shifting deliveries to nighttime and promoting flexible working hours.

Padilla, who as a child watched the 1984 Olympics from his family’s home in Pacoima, never got to see the games up close. But he said he was sometimes reminded of it on the road.

“I remember the license plates,” he said. “If you look closely, there are some people who are still proud of the special edition commemorative license plates.”

Why is Yellowstone flooding? | king5.com

Big Sean Got JHENE AIKO Pregnant But He's NOT READY To Marry Her . . . She's Just A 'Baby Mama'!

Was This the Summer That Saved the Biden Presidency?