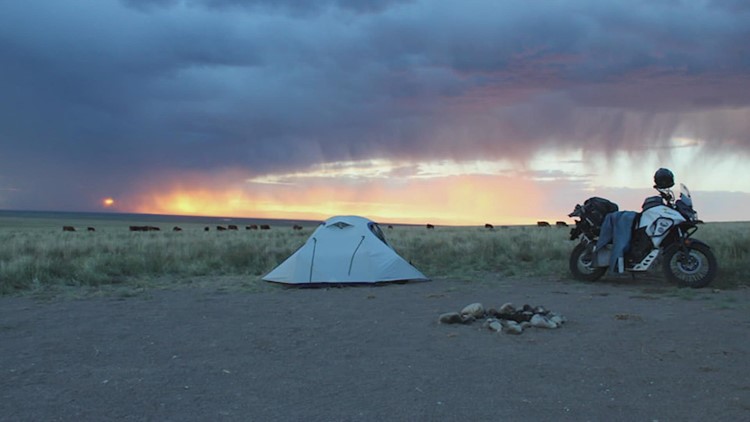 It could take 21-year-old Bridget McCutchen up to 18 months to circumnavigate the world.

At just 21, McCutchen is on course to set a record as the youngest woman to circumnavigate the world on a motorcycle.

The Wisconsin-born rider said it could take anywhere from a month and a half to 18 months to go around the world. It’s stops like Fat Turnip Farm that make you want to take it easy and enjoy the people along the way.

“This whole thing is crowdfunded,” McCutchen said. “So many people keep showing me their support. I even have super cool sponsors who help me because I couldn’t do it on my own.”

McCutchen admits it was originally her brother’s idea to take on the challenge, but it was her ability to potentially pull it off that inspired her to make it a reality.

“It started out as fun, but now it’s about inspiring other young people to go out and live a dream,” McCutchen said.

Ren Custer of Fat Turnip Farms said the teenage female worker was inspired by McCutchen and hoped other people would adopt her along the way.

“We’re here to support her as best we can, and as she says, you couldn’t do something this big on your own,” Custer said.

Their goal is to celebrate adventure and change the perceived demographics of motorcyclists.

“I represent the new generation of motorcyclists,” McCutchen said. “Young women who enjoy motorcycling are a growing force; They are people who want to be more present, encased in the world, not encapsulated in the bubble of a car.”

McCutchen has to follow a few rules to make her record official. It must start and end in the same place, the journey must be at least 24,900 miles, travel in both the Northern and Southern Hemispheres and beyond. A full list of rules can be found on their website.

A live GPS tracker allows supporters to see exactly where she’s riding. She will leave Washington State in a few days and head towards South America.

Henry Crew is the current record holder and completed his circumnavigation at the age of 23. McCutchen said Crew was a huge help in planning her attempt.

Will Chargers' Justin Herbert play? He threw with rib injury

Cases of RSV, children’s respiratory illness, on the rise