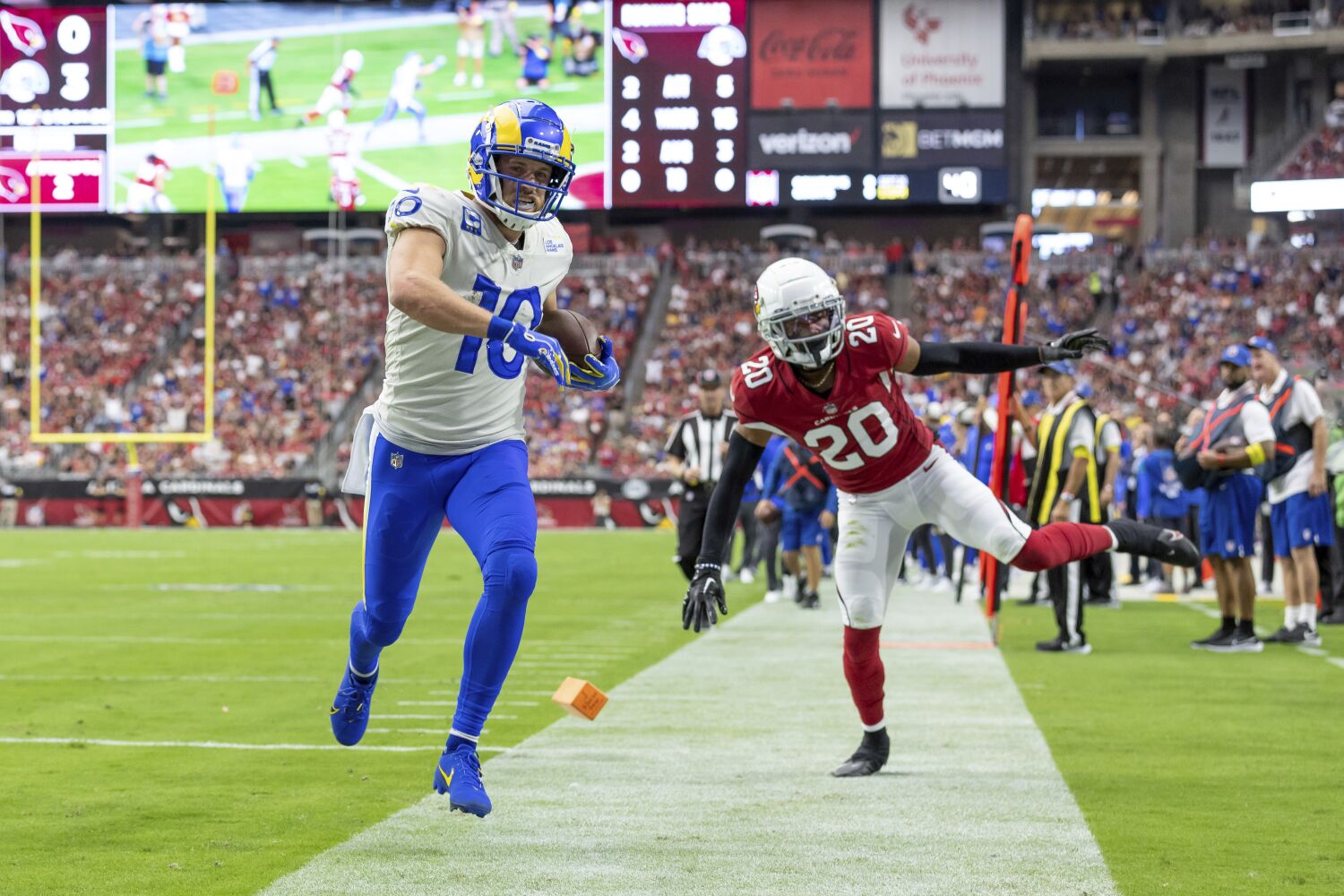 He’s not known as a receiver who simply blows past defenders on his way to the end zone.

But with the ball in his hands – this time on a jet sweep, not after catching a pass – Cooper Kupp seemingly found a new gear.

During last Sunday’s win over the Arizona Cardinals, Kupp took a handoff from quarterback Matthew Stafford on a misdirection play and ran 20 yards around the left end for his first rushing touchdown of his career.

“I still don’t call myself a blazer or anything,” said Kupp on Friday, “but I’m fast enough to sometimes come around the corner. I give myself enough credit to be able to do that.”

The Rams (2-1) will need Kupp at his best on Monday night when they play the San Francisco 49ers (1-2) at Levi’s Stadium.

The Rams have not defeated the 49ers in Santa Clara since the 2018 season.

Last January, in the NFC Championship game, Kupp caught 11 passes for 142 yards and two touchdowns in a 20-17 win over the 49ers at SoFi Stadium. The win ended a six-game losing streak against the 49ers and sent the Rams into Super Bowl LVI, where they defeated the Cincinnati Bengals.

Kupp caught two touchdown passes — and converted a vital fourth down on a jet sweep — in the 23-20 win over the Bengals and was named Super Bowl Most Valuable Player.

Kupp, the reigning NFL Offensive Player of the Year, is on track to potentially improve from last season when he achieved the so-called Triple Crown by leading the league with 145 catches for 1,947 yards receiving and 16 touchdown catches.

Kupp is in second place behind Miami’s Tyreek Hill, who has 31 catches, but Hill has played four games.

“I try not to think about the last year so much [as] I’m just trying to go out there and do my job,” Kupp said when asked if he felt like picking up where he left off in 2021, adding, “I can always get better, no doubt that applies now.

“I’d like to think that I’m a better footballer than I was a year ago, but there are so many things I can do [a] better job for this team and that’s my mindset.

“It’s the Cooper Kupp show, no matter how you try to slice it, if the guys double down, whatever it is, the guy finds a way,” 49ers defense coordinator DeMeco Ryans told reporters from the Bay Area on Friday Area. “I think the bond and chemistry between him and Stafford is some of the best I’ve seen in the league in a long time.

“These guys are always in sync.”

Rams defense coordinator Raheem Morris is glad he doesn’t have to plot against Kupp.

Now defensive coordinators have to consider Kupp as a dangerous opponent in the running game.

“The way the game was executed was at such a high level – it was so difficult for defenders to see where the ball was actually going,” said Rams offense coordinator Liam Coen. “You got that on tape, now they have to honor it all week.”

“Every time you get your hands on the ball, you love that,” Kupp said. “Any chance I get to play for this team, I’m there.”

What sportspeople, migrant workers, transport staff in Qatar are saying