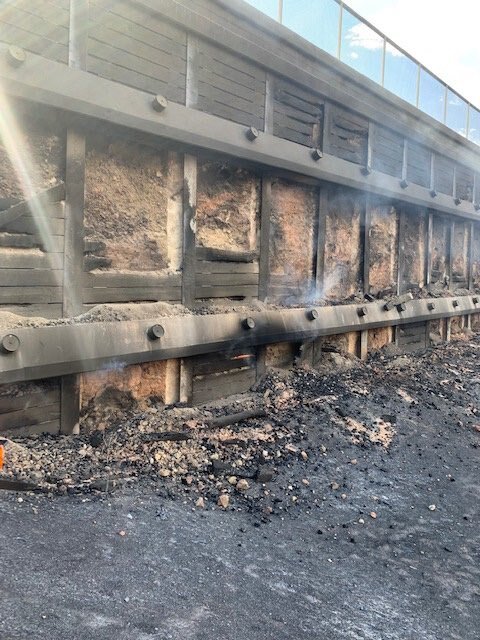 Two lanes of the northbound Freeway 5 near Castaic will remain closed through Tuesday as Caltrans engineers assess damage to retaining walls caused by the fire on the route.

The freeway’s two open lanes extend about three miles north of the intersection of State Route 126 near Parker Road to about Vista Del Lago Road, officials said. All southbound lanes are open.

The Route fire, which was first reported Wednesday, has burned more than 5,200 acres, according to the Los Angeles County Fire Department. By late Saturday night it was 87% contained.

Caltrans is advising drivers to take the 101 freeway or State Route 14 as an alternative this busy Labor Day weekend.

Wood paneling used in steel barriers for the freeway’s retaining wall was burned by the fire, according to Lauren Wonder, a spokeswoman for Caltrans. Parts of the wall were still smoking on Saturday.

Wonder said the steel “looks okay,” but she said compacted debris just below and behind the barrier became destabilized and began to detach from the banks.

Wonder said engineers were due to arrive Monday to assess the damage and test the wall’s structural integrity.

“We want to bring truck traffic onto the freeway, and we don’t want a scenario where the corner could slip,” Wonder said.

Wonder said the closure timeline would depend on the extent of the damage. She said the long-term prognosis for a full freeway opening is “to be determined.”

Caltrans will also replace damaged and destroyed guard rails and signage, and remove debris that has seeped into nearby camp drains. Rescue workers have closed parts of the highway since the fire broke out on Wednesday.

Heather Hutt is cleared to join the L.A. City Council