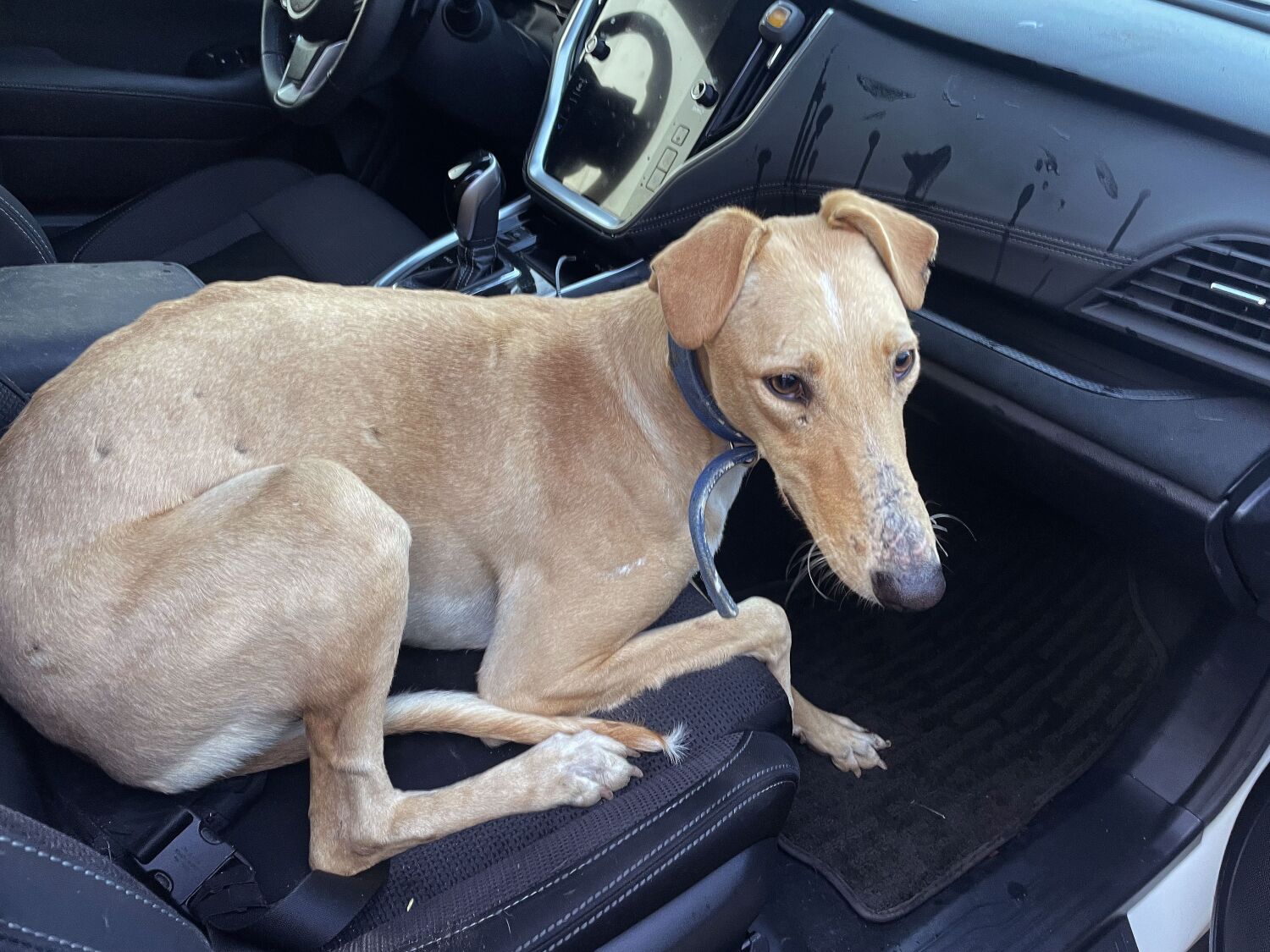 Brenda Marquez was driving east on Freeway 60 in Boyle Heights when she spotted a large box in her rearview mirror, then something more unusual — lots of large dogs roaming free.

She stopped on the right. It was just before 7am on Saturday, so there were few cars, but those that passed were going very fast.

Marquez called 911 and then attempted to round up the dogs — all greyhounds — without turning them into traffic.

Two dogs ventured up to her and she loaded them into her Subaru. Two others were harder to convince, but she managed to catch them. Marquez and other witnesses believe that 15 to 20 dogs in crates fell from the back of a truck onto the freeway.

A total of eight greyhounds were found and placed at the North Central Animal Shelter or in foster homes.

Where they came from and where they went remains a mystery. No one has come forward to claim them. They lack tattoos, so they probably aren’t from racetracks, said Cathy Kiburtz, president of GreySave, an LA County rescue group that specializes in ex-greyhound racing.

Volunteers from Kiburtz’s group have been combing the area near the Lorena exit in the fading hope of finding more dogs.

After Marquez called 911, it took about half an hour for a California Highway Patrol car to arrive, she said. An officer surnamed McAdams helped her get the four greyhounds she had captured into his vehicle.

He rescued a fifth dog, although neither of them had any luck with another that darted away and was later hit by a car.

The CHP did not provide any information about the incident.

“I have no idea how I did this,” said Marquez, a computer consultant and dog lover who lives in east LA with a Yorkie and a Chihuahua. “I don’t know where I got the willpower to get four dogs. I had no leashes or treats. But they were very cute, very malnourished.”

Many of the greyhounds have scars or rashes that Kiburtz said could be from falling off the truck.

“My phone has been ringing for hours. At this point, our critical effort is to find them,” she said. “We are focused on doing our best to bring these guys back and provide them with proper care.”

Tom Kiesche, a volunteer at the North Central Animal Shelter, described the five greyhounds there as “very docile. You all know each other. But what a crazy experience they went through.”

Kiesche, an actor, said he was eager to discover the origins of dogs.

“I really want to know who has them all in a wooden box in the back of an unsecured truck,” he said. “We’ve heard all these theories about where these dogs went and what they were doing. Nobody knows.”

Anyone with information about the dogs can call (866) GREY-SAVE.

According to the Humane Society of the United States, dog racing is now banned in more than 40 states.

Greyhounds adopted from racetracks are used to being handled by humans and are comfortable with strangers, but may not make good watchdogs, according to GreySave’s website.

Despite their speed, which can reach 45 miles per hour, greyhounds are “couch potatoes” who can sleep most of the day and adapt to living in an apartment, the website says.

Greyhounds, with their graceful builds and narrow heads, average 60 to 70 pounds. They are known to be independent, Kiburtz said. Your group will be looking for foster parents and adopters who are experienced with large dogs and are “at home a lot”.

“They usually get along well with other dogs, but these dogs shouldn’t be too small,” she said. “Having a greyhound is life changing and they are beautiful.”

https://www.latimes.com/california/story/2022-12-06/boyle-heights-greyhounds 8 greyhounds found, others missing, after fall onto freeway

Cowboys have concerns after meeting with Odell Beckham Jr.

ABC ‘General Hospital’ spoilers For July 14: Trina Has A Choice To Make, Spencer’s Ready To Act, And Victor Has Had Enough