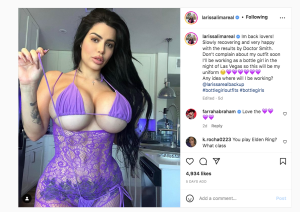 We all know that Larissa dos Santos Lima, former member of the cast of 90 Day Fiancé, worked as an online adult content creator and made a lot of money from it. She was dropped by TLC for posting live video on CamSoda.

TLC felt her naked body wasn’t the family material they wanted on their network. Days later she was arrested by ICE and her life seemed to go downhill. She recovered and has started making a ton of money sharing her adult content. Now it looks like she finally got her green card and is ready to share her new job with her fans.

Larissa has traveled the west, first living in Colorado and now back in Las Vegas, Nevada. She’s spent big bucks on plastic surgery and has vowed not to since she had a botched surgery that changed her mind about plastic surgeons.

She’s claimed she’s made millions of dollars from her work, but some of her followers aren’t entirely sure if she’s telling the truth, especially since she didn’t have a green card the whole time. She used her Instagram account to share her amazing news with her fans.

In the post, she wears lingerie that is purple and very thin. She told her fans: “I’m back lover! Slowly recovering and very pleased with Doctor Smith’s results. Don’t complain about my outfit, soon I’ll be working as a bottle girl on Las Vegas night, so this will be my uniform.”

She also mentioned her backup account, where she posts more information about where she will be working. She got a lot of likes for the post and one of them came from her ex-boyfriend Eric Nichols. The two still live together and as roommates. It looks like she works at a popular Las Vegas club, but she has yet to release the name. It seems like many of her fans are asking where she will be so they can see her. We’re not sure if she’ll release this information, but with all her admirers, she might.

Make sure to keep an eye on Larissa’s Instagram to see what she shares next about her new job.

Firefighter Family: A Mother-daughter firefighting duo in Washington state hopes to blaze a trail for women