When Char & Stave cut the ribbon on its new all-day cafe in March, it marked the introduction of what owner Jared Adkins calls coffee made by whiskey people.
There’s a regular line of blends and single origins but the main focus is coffee made with bourbon barrel-aged beans.
Adkins is also the owner of Bluebird Distilling in Phoenixville and says aging the coffee beans in his bourbon barrels gives the coffee aspects of whiskey-caramel, toffee, and vanilla, creating what’s almost like a dessert coffee.

You can also grab bags of coffee and bottles of Bluebird spirits and order a cocktail that literally combines the two.

The Old Fashioned is Bluebird bourbon blended with their morning light roast. The Ardmore City Wide is a shot of espresso and a shot of bourbon enjoyed in whichever order you like.

And if you don’t care for coffee, there are tea-based drinks like Rising Sun, a riff off a Mojito, with honey, green tea and chamomile.

Coffee and French pastries are the top sellers during the day.

The Whiskey Smash latte with bourbon barrel-aged espresso, frothed milk and a whiskey caramel reduction is already a favorite.
There are Happy Hour specials every weekday from 4-6pm. 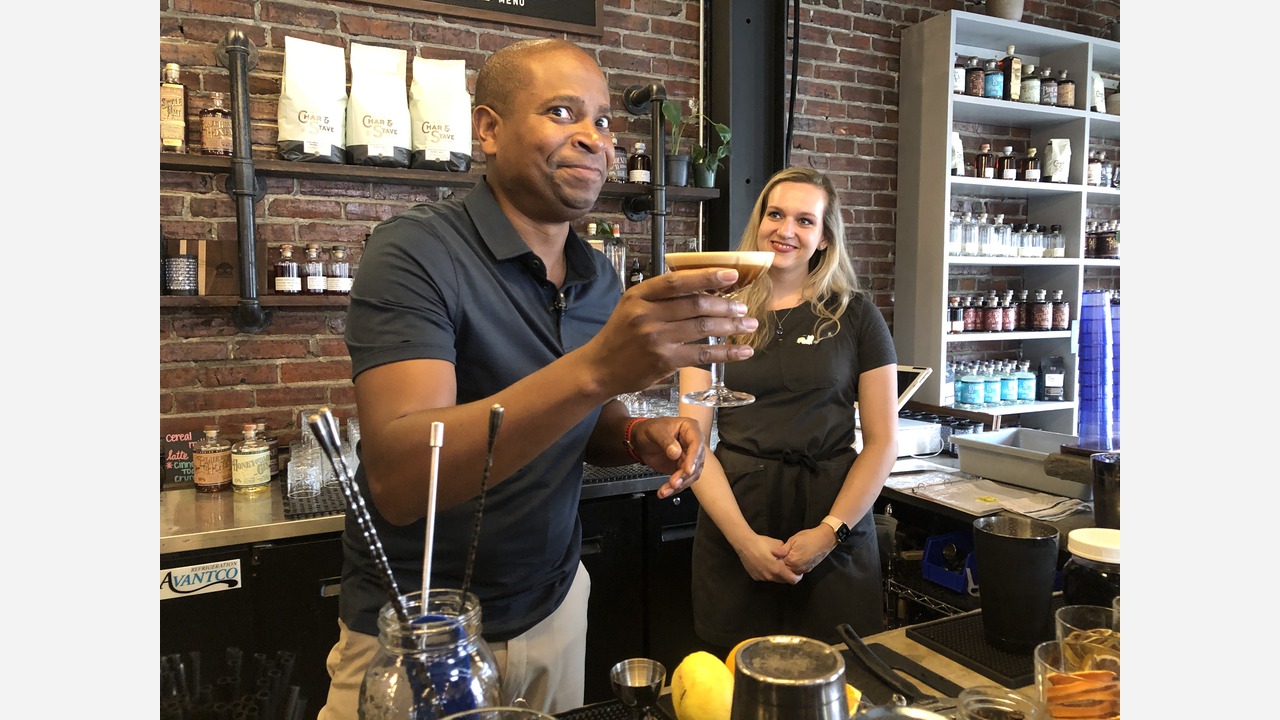 Rosario’s Pizzeria mixing things up Mexican style in South Philly
What do you get when you combine the flavors of Mexico with traditional Italian pizzas?

At Rosario’s Pizzeria in South Philadelphia, it could be anything from a ‘taco pizza’ to a ‘chipotle cheesesteak’.
This takeout/delivery spot in the Newbold has a menu filled with unique options created by owner Margarita Jeronimo and her family.

They experiment with the ingredients of their home country to come up with exciting new tastes, but still offer traditional hoagies, burgers and fries.

Summer winery tours: 6 spots to sip in Pennsylvania and New Jersey
William Heritage Winery is a family-run estate vineyard in Mullica Hill, with 40 acres of grapes in the heart of New Jersey’s largest wine-growing region.

Penni Heritage and her husband Bill converted the former peach and apple orchard into a winery more than 20 years ago, making award-winning reds and whites.
You can sample in the tasting room, open seven days a week

While you sip, you can savor snacks like the uber-popular pepperoni bread or grab-and-go charcuterie boxes.

If you’re headed down the shore, stop at Sharrott Winery in Hammonton.

Everything’s grown, bottled and produced at the winery. They make 20 varieties of reds, whites, and dessert wines.

You can sit on the terrace overlooking the vineyards and create your own flight for just $13.50.

Opened in 2016, the winery specializes in mostly dry, Old World style wines.
Their cab franc is currently the highest-rated wine in New Jersey, and they offer frozen grapes on hot days. Drop one in your drink to keep your wine chilled without watering down the flavor.

Cape May Winery is the fifth-largest producing winery in New Jersey, run by a father/daughter team with four vineyards producing 17 varieties of reds, whites and ports.
As you explore the property, be sure to look up and notice unique details like the hand-crafted chandelier made from reclaimed wood salvaged from the oldest and largest tree in Cape May that had to be cut down.

The wines are French-inspired and there are six cottages so you can book a room, drink some wine and enjoy a prefix 3-course meal.

They started in their parents’ garage. They now have 14,000 vines on a former dairy farm in Nottingham, Pa., and the whole Wayvine Winery operation is a family affair.

They all started businesses before they were out of high school.
Ka’s Treats offers optional home delivery of two favorite snack foods — banana pudding and buffalo chicken dip.

Made by Quawyyah Powers, her recipe for success started when she made a pudding as a gift for her sister.

When friends and family thought it was good enough to sell, she started cooking on the side while going to school, playing sports, and working a part-time job.

Elijah Barker took pandemic boredom and cleaned up with handmade soaps and scrubs.
His business The Skin Cafe is registered as an LLC and he plans to expand his product line.

Sierra Jones learned how to do tie-dye, and then took her colorful designs to the apparel market.

Cee Everything Clearly combines her nickname ‘Cee Cee’ with her outlook that we should always try to see things in a new perspective.

Positive messages are emblazoned on tie-dyed items like hoodies, sweatpants, and socks.

The space provides members with a chance to create art projects for sale to the public.

One of the primary missions of SpArc is to help those with disabilities find work.

The art studio has done just that, with the resident artists earning a large percentage of every sale they make at Cherry Street Pier.
The organization takes a percentage to cover the cost of supplies.

Not only does the art studio provide employment, but it also provides freedom and creativity for the residents.

They have professional instructors who teach them how to use and create inside the studio.

The shop includes everything from notecards and jewelry to paintings and pens.
On August 5, 2022, there will be an art show at Cherry Street Pier where residents will display their work.

In order to win the Tesla, guests need to become a Live! Casino Rewards members and for every game they play through July 29, they will be entered to win.

There are also prizes being given away throughout the month leading up to the grand prize.

The casino, which offers an array of games and sports betting opportunities, also has first-class dining options with modern Asian fare at Luk Fu, top-of-the-line steak at The Prime Rib and a more casual atmosphere at Sports and Social.

Karen Rogers brings us the details in this week’s 6abc Loves the Arts.

Gatecrashers: The Rise of the Self-Taught Artist in America showcases early 20th century painters who changed the art world.
“That’s really looking at how self-taught artists have always pushed the boundaries, challenge the ivory tower,” says Katherine Jentleson, Curator of Folk and Self-Taught Art at the High Museum of Art says, “and really succeeded against all odds.”

The show begins with three highly celebrated self-taught painters between the first and second World Wars.

“She became the most famous American painter who ever lived,” says Jentleson. “His kind of testament to the sacrifice that so many African American people have made.”

And John Kane, a Scottish immigrant who settled in Pittsburgh. He worked in steel and coal before an injury turned him to painting.
The exhibition also showcases artwork created by people hired by the federal government during the Great Depression.

“He’s envisioning the flight of an enslaved person along the Underground Railroad,” says Thomas Padon, Director of Brandywine River Museum of Art.

The photographs were all taken in Ohio, in a section of the Underground Railroad that led to Lake Erie.

“There would be people that would take you to Canada and therefore you would be free,” says Padon, “There’s a very visceral feeling.”
‘Gatecrashers’ is on view through Sept. 5 and ‘Night Coming Tenderly, Black’ through Aug. 31.
—
Brandywine River Museum of Art | Instagram | Facebook
1 Hoffman’s Mill Road, Chadds Ford, Pennsylvania 19317
‘Gatecrashers: The Rise of the Self-Taught Artist’- through September 5, 2022

SHOW EXTRAS
The Philadelphia Zoo is now offering visitors a chance to have an up close and personal encounter with the zoo’s three tallest creatures.

The Library Company of Philadelphia has a new exhibition called Hearing Voices which uses the library company’s collections to tell the story of 19th-century mental illness treatments and experiences.
The stories are told by those who lived it, in their own words. The exhibition includes artwork, poetry, a quilt created by one asylum patient for another, and what were known as insanity narratives, which were published accounts of a person’s experience in an asylum or with mental illness.

You can view the exhibit in person through Dec. 22 and online.
Library Company of Philadelphia: Hearing Voices | Facebook | Instagram
1314 Locust Street, Philadelphia, Pa.19107

Every Tuesday, The Delaware River Waterfront Corporation is hosting The Philly River Stroll.
There are specials, deals and discounts from all of the attractions along the water, starting at Spruce Street Harbor Park up to the Cherry Street Pier.

There are also programming activations on Tuesday nights, including circus performers that will be up and down the waterfront.
The Philly River Stroll | Facebook | Instagram
Tuesdays, 4-7 p.m. through Aug. 30
Delaware River Waterfront,

Ben Affleck And Jennifer Lopez Get Married In Las Vegas

Man in Australia Was Killed by Kangaroo in Rare Attack

Ukraine Will Fight Until All Russian Forces Are Expelled, Military Intelligence Chief Says