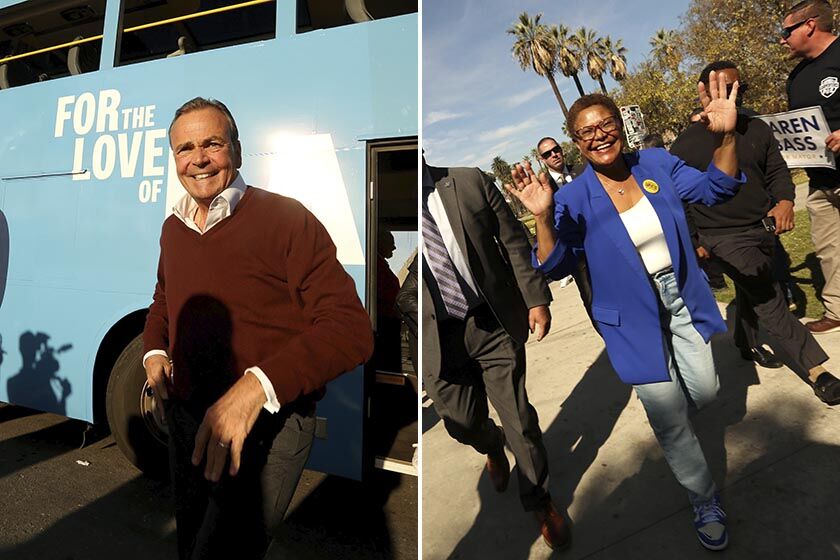 It has been more than a week since polling stations closed in the Los Angeles mayoral race. We still don’t know exactly who won, but we do know a few things.

First, Karen Bass is on track to become the first woman and second black person to lead this great but deeply troubled city. On Monday and again on Tuesday, the longtime congresswoman extended her lead over billionaire developer Rick Caruso from 52.5% to 47.5%.

In fact, that it is ahead at all, let alone by 5%, is quite a political achievement.

Caruso poured more than $100 million into his campaign, spending tens of millions on advertising on every possible platform and hiring an army of campaigners to go door-to-door to collect votes. The unprecedented total is the main reason – but like it or not, it’s far from the only reason – this race is no bass landslide. (At least not yet.)

Which brings me to the second point we know: many Angelenos liked both candidates.

Throughout the campaign, Bass and Caruso were repeatedly asked if they would offer their opponent a role in their administration. Or, if offered such a role, whether they would actually accept it. The most definitive answer I heard from both candidates was a reluctant “maybe.” And mostly it was just a shrug.

For a city where voters are clearly at odds over how best to solve an ever-growing list of intractable problems, an enthusiastic “yes” might look like this.

Listening to candidates give the same stupid speeches, the same clever jokes, the same sharp digs, over and over for months can get really old. But this one from Bass never did:

“I have to say that for someone who has spent his life as a builder,” she said during a recent debate, glancing sideways at Caruso, “he has never built affordable housing, let alone cared for people who are homeless were.”

Bass was, of course, referring to Caruso’s fantastic plan to provide housing, be it sleeping pods or boxabl prefabs, to 30,000 homeless people within 300 days. And how that was suddenly so important to him as a mayoral candidate after so many years as a developer building shopping centers for the rich.

During the debate, Caruso’s usual response to Bass was, “That wasn’t my job.” And he’s right. It wasn’t and it’s not his job. But what if it was in a bass administration?

Before you think I’ve lost my mind, notice that I said housing czar, not homelessness czar. The two problems are related, but not the same.

Getting tens of thousands of homeless people off the streets of Los Angeles — Bass promises 17,000 in a year — will require a lot of work on many fronts. More temporary housing obviously needs to be part of the solution, and the City Council seems to recognize that.

But more temporary housing may not be the whole solution, or even most of it. Because no one wants to live forever in a tiny house or hotel room, with a curfew and strict rules for what housed people would simply call growing up.

LA desperately needs more permanent supportive housing and more affordable housing. And yet I’m one of those voters who has little confidence in the city’s ability to stand up for it, even under Mayor Bass.

What if he could use his expertise in dealing with the city as a real estate developer to unravel the bureaucratic mess that is the permitting, planning, zoning, and financing processes that are driving up the cost of residential development? As research by The Times has found, this cost often acts as a deterrent to building what is needed on the scale needed.

Why would Caruso trade his cozy office in the Grove for a job as LA’s housing czar? Do you take on all the headaches of government without having the prestige of a mayor?

It goes back to something he told The Times last week when the LA County Registrar-Recorder/County Clerk’s office began counting the ballots.

Karen Bass: Tsarina of the Coalition

A recent poll by the UC Berkeley Institute of Governmental Studies, co-sponsored by The Times, found that nearly 70% of LA’s registered voters believe the city’s racial and ethnic relations are “fair” or “poor.” Black voters are the most pessimistic at 77%.

Those are high percentages.

In the increasingly unlikely chance of Caruso winning the mayoral race, his first step should be to bring in Bass as LA’s first coalition czar.

Though it faded from headlines during the election, the leaked racist recording of three Latino LA City Council members and a Latino union leader plotting to dilute black political power is still wreaking havoc.

On Wednesday, a coalition of community groups is planning a rally in Boyle Heights to again demand the resignation of one of the council members involved, Kevin de León. He stubbornly refused, casting a shadow over the town’s business.

Fear and suspicion that the city is operating a zero-sum political system that pits residents against residents for essential services won’t help LA solve homelessness, housing affordability, or public safety.

Bass is best equipped for this. She’s maintained that throughout her political career, starting with the founding of the nonprofit Community Coalition, which works to reverse decades of structural racism in South LA that has hurt blacks and Latino Angelenos alike.

“We need new direction in LA and new leadership to ensure we reject the divide-and-conquer politics,” Bass said during a debate last month, days after the leaked audio surfaced online and was first reported by The Times .

Thankfully, if the current trend in election results continues, we’ll likely get the mayor. And maybe even an apartment czar.

https://www.latimes.com/california/story/2022-11-16/karen-bass-rick-caruso-perfect-job-for-loser-la-mayor-race A perfect job for the loser of the Los Angeles mayor’s race

Our experts' favorite players to roster this season

Why I Support Reform Prosecutors

Op-Ed: No one really has any clue about what’s going to happen in the midterms