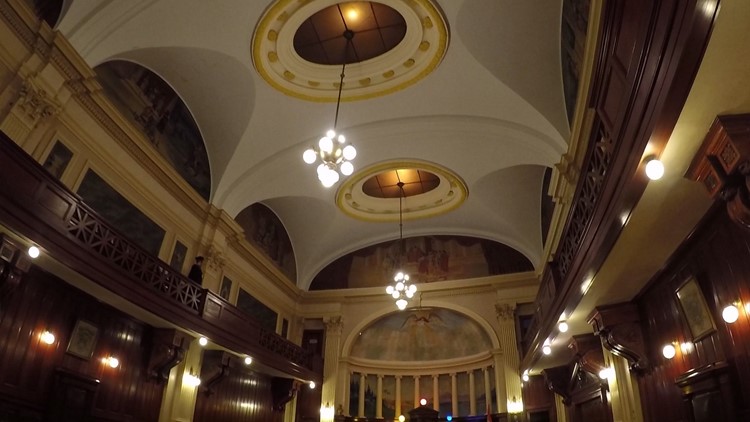 For more than a hundred years, the men who entered this four-story Tacoma building and climbed the well-worn stairs joined a secret society: the Knights of Pythias.

TACOMA, Wash. — For more than a hundred years, the men who entered this four-story Tacoma building and climbed the well-worn stairs joined a secret society: the Knights of Pythias.

“They are all members of a brotherhood. Well,” said historian Michael Sullivan, “they’re knights, you know.”

Here shields hang in hallways, red cloaks in a vestibule, and a password is required to gain access to a room called Castle Hall.

“If it was wrong, one of the knights or law enforcement officers out here will probably escort you out of the building,” Sullivan said.

What could be such a big deal?

It’s not just a room. It is a sanctuary where time has been frozen for more than a hundred years.

“I never go into this space where I’m not amazed at the level of preservation,” Sullivan said.

It was built during Tacoma’s heyday. Designed by the same architect responsible for Stadium High School and the craftsmen involved would have been members of the Lodge.

“The Pythians were generally guys who worked in mills, carpenters, and shipwrights,” Sullivan said.

That such a great room could be tucked away in a building like this was kind of an idea.

“For the most part, it was a secret place and people walked past it every day and no one had any idea it was here,” Sullivan said.

The Holy Bible has pride of place and so does Abraham Lincoln. The Knights of Pythias were founded during the Civil War by government officials hoping to heal the nation through the kind of “brotherly love” exemplified by the Greek legend of Damon and Pythias.

“It kind of comes across as quite intense in where his head is literally on the block,” Sullivan said.

There’s ritual, lots of symbolism, and no shortage of colorful costumes, but Michael says this order is fundamentally very similar to others.

“They were called insurance companies because the members paid dues and then the pool money was used like an insurance fund to support families and kids and stuff like that,” Sullivan said.

It may all sound like something from days gone by, but the Knights of Pythias are still active. Michael – it turns out – is a knight, as is college professor Joel Larson.

“I can tell you that we wear things when we walk into this room, but I’m not allowed to reveal which ones — or the meaning of those outfits,” Larson said.

The Knights of Pythias, still a secret society after all these years.

Will LA see a boost in tourism when COVID test rule expires?

Keeping Up With Travis Barker