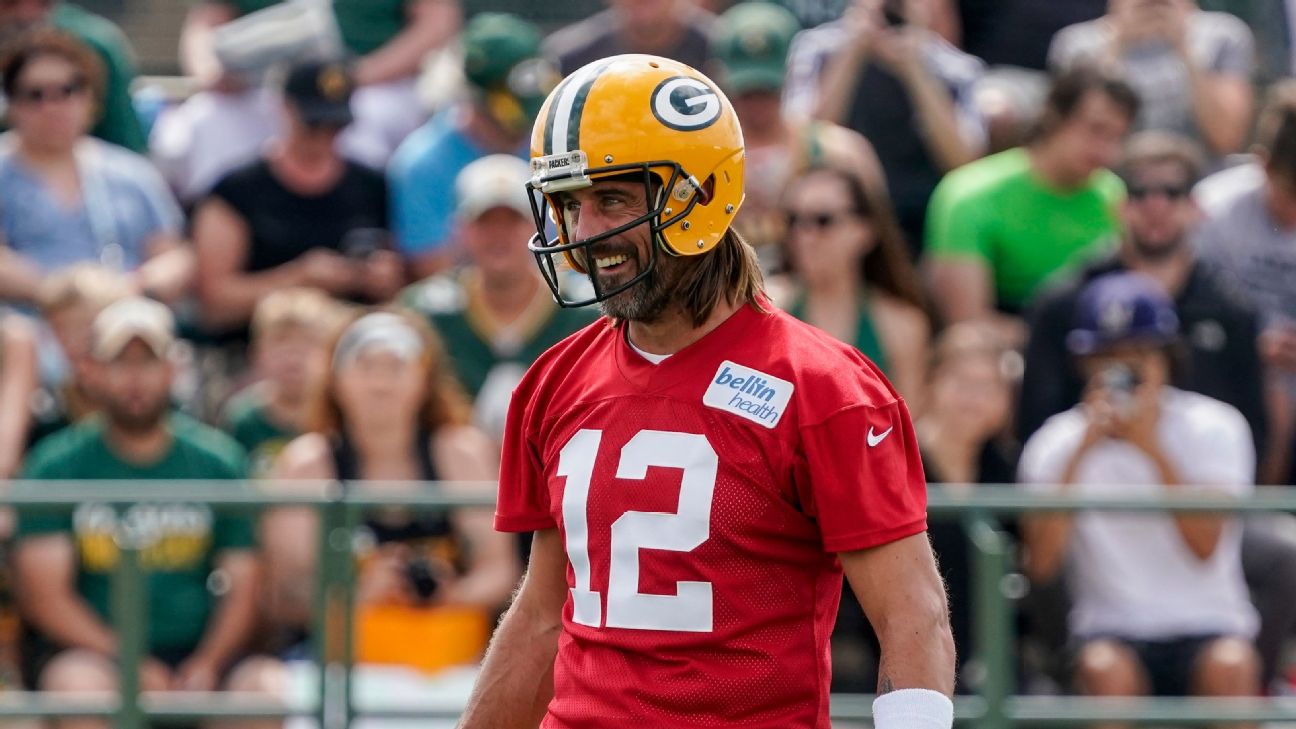 GREEN BAY, Wisconsin — When Aaron Rodgers reported to training camp almost exactly a year ago, he aired many of his grievances with the Green Bay Packers during a 32-minute press conference.

The mood of the reigning two-time MVP was completely different on Wednesday after the first training session of this year’s camp.

Rodgers poked fun at former teammate Davante Adams, joked that without the star receiver, the Packers are now a defensive team, said he plays the game for “love” and shared an anecdote that shows how much things are changed in the organization.

Adams, who was traded to the Las Vegas Raiders at his request in March, recently spoke about his move from Rodgers to quarterback Derek Carr, telling CBS Sports, “Every time you move quarterbacks from Hall of Famer to Hall of Famer …it’s going to be a bit of an adjustment.”

So when Rodgers was asked about Allen Lazard potentially replacing Adams as the Packers’ No. 1 receiver, he mimicked Adams’ recent comments.

“Yeah, I mean, it’s always hard going from Hall of Famer to Hall of Famer,” Rodgers said before pausing and waiting for the laughter to subside. “It will be a transition from Davante to Allen, but he can do a lot.”

Rodgers also joked that “we’re a defensive team now” without Adams, but he clarified that his comment was ironic.

“I definitely like our defense on paper,” Rodgers said, referring to a unit that finished ninth last season and saw the team’s two first-round picks go to defenders Devonte Wyatt and Quay Walker. “But offense still wins games and we have to be efficient offensively.”

Rodgers was quick to point out how effective the offense was during Wednesday’s 90-minute padless practice. He completed several passes for Lazard in team periods, including one that looked a lot like Antonio Freeman’s “Monday Night Miracle” catch in 2000.

“I felt like coming into camp, to be honest, most days we were going to get our butt kicked because our defense is talented and deep and athletic,” Rodgers said. “It’s one of the best defenses on paper we’ve ever had, but I said to those suckers, ‘1-0 offense’.”

Rodgers, who only trained twice throughout the offseason program, looked as sharp as ever. He’s not expected to play in preseason games, so his practice repeaters are all he needs to prepare for the season while also making sure his arm doesn’t get sore.

“I think that’s something we always watch with all quarterbacks, just in terms of the number of throws they’re getting,” said Packers coach Matt LaFleur. “Certainly we did that last year and we will follow a similar protocol as in the past.”

Rodgers returned for his 18th NFL season (15th as a starter), armed with the three-year, $150 million contract extension he signed in March and four MVPs under his belt, including each of the latter both seasons. When asked why he’s still playing, he said, “Love, probably.”

“I just use the love of this game, the love of my teammates,” he added. “It’s what gets me up in the morning, to come here and love what I do and have that gratitude for this opportunity. Because at some point the journey will be over. So enjoy every step of the way.

“Of course we want to win a Super Bowl, and individual awards are great. But being present in the moment I think is very important, especially for an older player, because every moment is just that little bit more special.”

Rodgers also said he’s seen significant changes in the organizations over the past year since he expressed his dissatisfaction. He said there was a more personal touch from top to bottom and gave an example of what it used to be like.

“There are funny stories — not funny, actually — about Kenny Clark coming in on cut day and someone thought he was some other guy who was going to be cut and they said to him, ‘Pick up your book and go upstairs,'” said Rodgers. “And Kenny’s like, ‘What? I was a first-round pick. I’m getting cut? It’s my third year.’

“You know, things like that just can’t happen in a well-run organization because relationships are the most important thing in this game. That’s what drives chemistry — chemistry drives a team’s cohesion, and it makes a difference in those crunch-time moments when the game is on the line. And it starts at the top.”

The Morning After: Instagram head responds to test feed backlash

Dodgers vs. Rockies: How to watch, start times, schedule