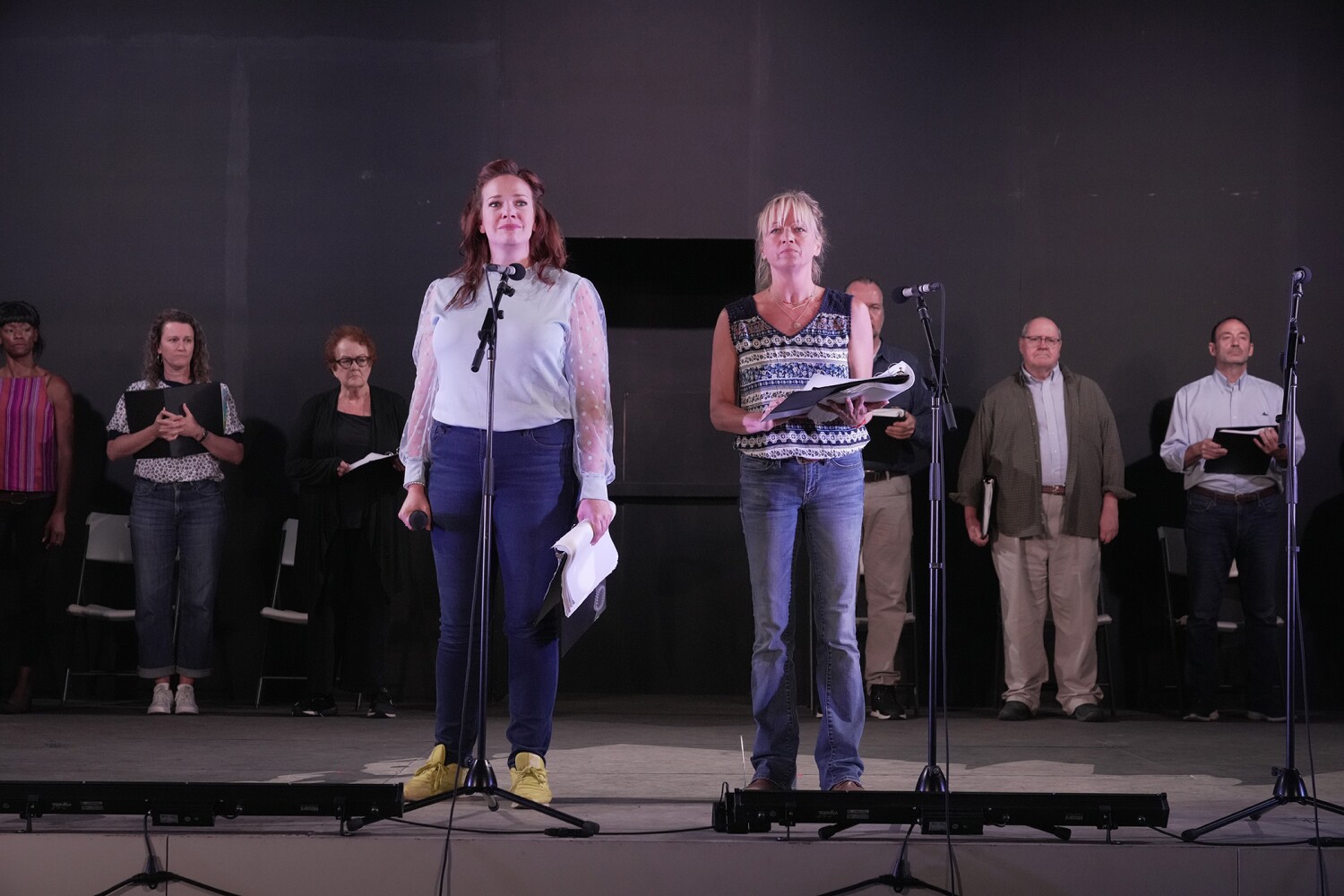 On Friday, after the US Supreme Court overturned Roe vs. Wade, the cast and audience at LA’s Fountain Theater discussed the verdict in the middle of a live show.

Performer Christina Hall reminded the crowd that all three judges appointed by former President Trump had vowed at their confirmation hearings not to overturn precedents set by previous courts. “And then they did!” Halle exclaimed.

But then we all sat down and watched Hall recite the rest of her lines. She didn’t break character. She played Sarah Weddington, the attorney who represented Jane Roe before the Supreme Court in 1973, in a scenic reading of Lisa Loomer’s 2016 play Roe.

As soon as news broke in May that the court was likely to reverse Roe – erasing half a century of legal precedent – Stephen Sachs, the fountain’s artistic director, began planning to revive Loomer’s play on an outdoor stage set a year ago built in response to the pandemic.

To get the show up and running in time, The Fountain presents “Roe” as a “hyper-staged” reading with no backdrops or props. The cast wear scripts as they interact with each other under the brisk direction of Vanessa Stalling. Weddington and Kate Middleton, who plays plaintiff Jane Roe (real name Norma McCorvey), played their roles elsewhere in previous productions, so their characters feel fully lived-in and their Southern accents are locked in.

Loomer’s playful script also lends itself to an informal approach. Her characters are aware that they are characters — that their names and actions are being used in the service of a drama — and they often punctuate the story with synopses, helpful context, self-justification, and deadpan quotes from internet encyclopedia entries. After snorting a string of cocaine, McCovey turns to the audience and shrugs, “What? That was the 90s.”

“Well I’m going to go now as this is going to be the highlight of my life,” Weddington’s colleague Linda Coffee (Susan Lynskey) announces at the end of her story arc, adding after one bar, “According to Wikipedia.”

This direct address encourages the audience to join in — cheer when things are going well for Weddington, cheer when Justice Blackman (the lovable John Achorn) reads his groundbreaking opinion, cheer when the cheeky McCorvey puts someone in his or her place instructs to sigh when she finds love with the supportive Connie (a heartbreaking Xochitl Romero) and boo when she submits to the rhetoric of born-again Christian preacher Flip Benham (a slimily charming Rob Nagle).

Loomer regularly updates the opening and ending of “Roe” to reflect the latest social, political and legal attitudes towards abortion rights, and has brought a fresh sense of urgency to every production since the play premiered in 2016. (Friday’s fountain reading was the final preview before Saturday’s opening night; the run ends on July 10.)

But Friday night’s performance of “Roe” was the first to be held in the United States without constitutional abortion rights. For the first time in the play’s life, his retrospective look at the story of Roe v. Wade doesn’t like a fundamentally optimistic reminder of the price of our freedom. The whole context had changed.

No one in the crowd cried, whooped or rioted – although police helicopters, apparently alert to the possibility of protests in the city – buzzed overhead throughout the performance. The mood was subdued, even restless. what did we see Was it, as Weddington asked in her new introduction provided by Loomer, “an obituary for Roe v. Wade or a call to action?”

An obituary and a call to action are two different things that evoke largely incompatible responses. The discrepancy left me and my companion at least somewhat at a loss for the evening. Should we mourn, then some of the play’s humor came across frivolously, or should we storm the Capitol, what are we waiting for?

In the second act in particular, as McCorvey’s motley post-Roe life weeds as a pledge of various causes, I felt an impatience that would not have plagued me months ago.

At the time, I saw Roe vs. Wade as an ever-contested but unyielding principle of American civil liberties. I naively assumed that while it would be regularly threatened it would never be overturned. The play’s outspoken conversations about the horrifying realities Roe vs. Wade was meant to leave behind — the dangerous, illegal abortions, the routine forced sterilizations of women of color — are a lot harder to hear when describing the possible future than as well as the distant past.

So I waited a little desperately for Loomer’s rewritten ending to Roe, hoping it would provide me with some reassuring wisdom or a game plan. Of course, I knew that Weddington was dead, along with almost everyone in the story except for Clarence Thomas, but I was still waiting for her avatar to tell me what to do. That is asking a lot of an avatar and certainly of a play or playwright.

I didn’t get a simple answer at the fountain on Friday. I got a better understanding of the deep roots of this endless struggle, the tenacity of both sides. I was reminded of how difficult it was to establish Roe vs. Wade, how much work and struggle went into that effort. The thought of how much more work and struggle would necessarily be required to do it again, with such long odds, left me discouraged, slightly faint and on the verge of despair. But don’t despair yet. Even then, the chances were bad.

Fact-check on domestic supply of infants quote from SCOTUS

‘Funny Pages’ review: A blistering portrait of a teen cartoonist