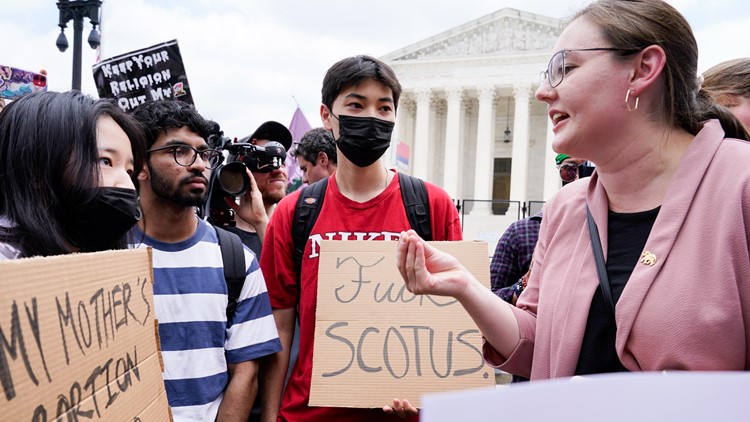 As an outburst of differing emotions sweeps through the nation, the growing rift between Americans comes to the fore

The chasm across the country over abortion rights was plain to see, with pro-choice advocates condemning the decision as a dark day in history, while anti-abortion advocates rejoiced and said it will save countless lives.

In abolishing half a century of constitutional abortion rights, the Supreme Court left the politically sensitive issue to states, about half of which are now likely to ban the procedure.

Hundreds of people surrounded the barricaded Washington Supreme Court, some questioning the Supreme Court’s legitimacy while others cheered the verdict and heralded the dawn of a “post-Roe” world.

Many young people in the crowd wore red T-shirts that read “The Pro-Life Generation Votes” while chanting “Pro life is pro woman!”

Others involved in the decades-long struggle for women’s rights felt an acute setback for the movement, but remained hopeful that it might prove temporary.

“It’s not unexpected, but I’m absolutely furious that we’re seeing … the huge white male supremacy backlash. And that’s what this is about. It’s about controlling women’s reproductive lives,” said Carol E. Tracy, executive director of the Women’s Law Project in Philadelphia.

“They want women to be barefoot and pregnant again. But I have no doubt that women and like-minded men and people in the LGBTQ community who are also at great risk…we will fight back. I think it’s going to be a long, hard fight.”

Watching the scene unfold at the Supreme Court, Garrett Bess, who works with a lobbying arm of the conservative Heritage Foundation, said his group will continue to press states to limit abortion.

“We will work with Americans on the ground to ensure the protection of pregnant mothers and babies,” Bess said. “It’s been a long time coming, and it’s a welcome decision.”

Opinion polls show that a majority of Americans support the preservation of roe.

Response in state houses across the country was swift. In Indiana, Republican Gov. Eric Holcomb announced plans to put abortion restrictions on the agenda of a special legislative session early next month to address inflation.

“The Supreme Court’s decision is unequivocal, and it is now up to the states to address this important issue,” Holcomb said. “We’ll be doing that in Indiana shortly.”

Medical student LaShyra Nolen, the first black woman to become class president at Harvard Medical School, feared, among other things, the impact of abortion bans on minorities and poor women.

“In the past month we have seen this country not ready to ensure babies have access to formula that can be fed daily. We have seen our children not being safe in our schools due to a lack of gun control. We also continue to see devastating statistics that black women are more likely to die in childbirth compared to white women,” Nolen said.

“So if you have these staggering disparities in our country and you force someone to give birth,” she said, “then I think that’s going to lead to really dangerous actions and really dangerous conclusions.”

‘Dancing with the Stars’: 16 couples perform for season 31 debut on Disney Plus. Who survived and who was eliminated?