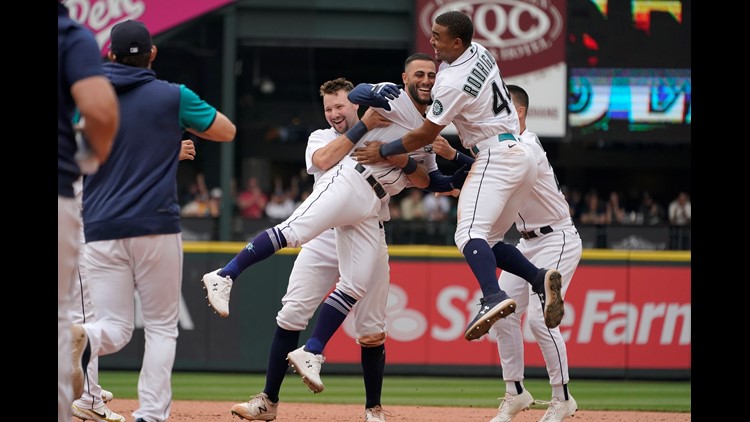 Pinch-hitter Justin Upton hit a home hit in the eighth inning, and Abraham Toro scored the winner in the ninth inning to lift the Seattle Mariners over the oak

SEATTLE — Pinch-hitter Justin Upton hit a home hit in the eighth inning and Abraham Toro hit the winning run in the ninth inning to give the Seattle Mariners a 2-1 win over the Oakland Athletics on Saturday.

The Mariners loaded the bases with no outs in the ninth when Lou Trivino (1-6) passed Eugenio Suarez, Carlos Santana singled and Cal Raleigh hit Nick Allen’s error on shortstop.

“There’s been a lot of talk lately about how we keep guys on base, but I think we’re going to change it,” Toro said. “We have a really good line-up. It’s about the pressure in those situations being on the pitcher, not on us, and we had to use that.”

Upton sent the first pitch he saw from AJ Puk, A’s Reliever, in Edgar’s Cantina in left field to tie the game. It was his first homer of the season, the 325th homer of his career and his first ever as a pinch hitter.

“I’m definitely not used to it,” Upton said. “But I got pinched the other night, and you’re just starting to find ways to find out. You just have to change your mindset a bit when you pit and I was able to elaborate today.”

The A’s scored in George Kirby’s first off when Tony Kemp took the lead with a walk, Ramon Laureano made a single and Sean Murphy had a sacrifice fly.

Kirby, who got off to a rough start on Monday when he conceded four homers against the Baltimore Orioles, had 16 of his last 17 hitters out.

The Mariners freshman gave up three hits in seven innings and fanned out nine.

“He was in total control all day,” said Seattle coach Scott Servais. “After they ramped up the barrel on the first try, he just got into a great rhythm when he landed the curveball and the fastball had a lot of life.”

Blackburn was also dominant, knocking out 14 straight hitters at one point in the game. He blinded the Mariners on four hits in 6 1/3 innings and knocked out five.

“(Kirby) threw the ball well, but (Blackburn) was pitch after pitch with him today. said Oakland manager Mark Kotsay. “I thought these two starters did really well overall.”

Kotsay was ejected at the end of the sixth inning by home plate umpire Chris Segal after he complained about a call to Seattle’s Julio Rodriguez.

Athletics: INF Jed Lowrie (shoulder) had an MRI earlier this week which Kotsay said showed fluid buildup. Lowrie has had a cortisone injection but has no timetable for a return just yet.

Athletics: Frankie Montas (3-8, 3.20) is the Sunday starter for the A’s. He has allowed just six hits and two earned runs in his last two starts, which came on June 23 against the Mariners and June 28 against the Yankees.

Bill Russell’s No. 6 to be retired across NBA following legend’s death last month