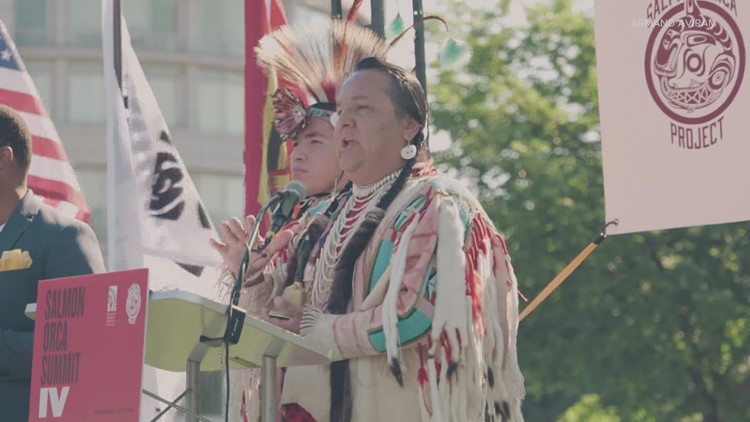 They delivered a series of speeches, songs and dances as they called Congress to action.

WASHINGTON DC, DC — On Thursday, tribal members and supporters of the Salmon Orca Project met with federal officials demanding the removal of the Snake River dams.

They delivered a series of speeches, songs and dances as they called Congress to action.

“Action must be taken,” said Samuel Penney, leader of the Nez Perce tribe. “We believe there is enough biological, scientific information available to make a decision that should be based on it and not be a purely political decision. The extinction crisis we are in right now requires urgent action – there is no time for additional studies.”

The Biden administration released two reports Tuesday arguing that dismantling dams on the lower Snake River may be required to bring salmon runs back to historic levels. It is possible to replace the energy generated by the dams, but it will cost between $11 billion and $19 billion.

A draft report by scientists from the National Oceanic and Atmospheric Administration found changes needed to restore salmon ranging from removing one to four dams on the lower Snake River to reintroducing salmon into areas completely blocked by dams. A second report looked at how power supplies could be replaced when dams break.

But groups like Northwest RiverPartners are pushing back, saying the data doesn’t show removing the dams would necessarily recover salmon. The group, which represents community-owned electric utilities and clean energy agencies, says the hydroelectric power produced is essential to combating climate change.

One of the major benefits of the dams is making the Snake River navigable as far north as Lewiston, Idaho, allowing barges to transport wheat and other crops to seaports. Eliminating the dams would require improvements in trucking and rail transportation to move the crop.