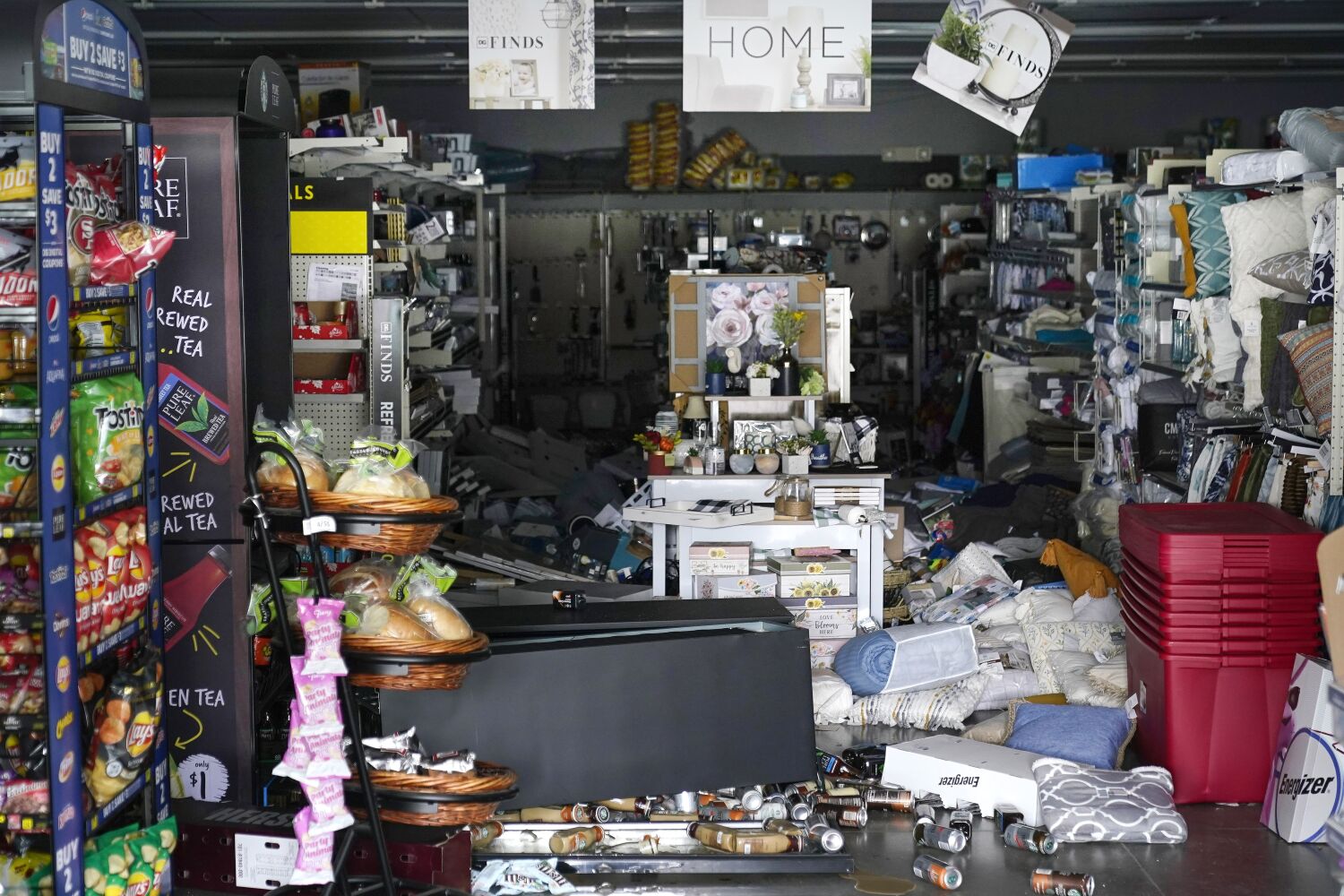 Residents of rural communities in the Eel River Valley, who combed their homes with flashlights in the dark, could only feel the damage Tuesday’s earthquake had done to their lives, five days before Christmas.

Houses littered with broken glass. Framed pictures broken on the floor. Cups and souvenirs in pieces next to it. Bookshelves and kitchen cabinets emptied.

However, at first light the devastation was evident. Canopies had collapsed. A building caught fire. The popular, multi-arched Fernbridge, a 1911 Humboldt County landmark and veteran of past earthquakes and floods — its guard rails were buckled, evidence of the violent shaking — has been closed by the California Department of Transportation.

More than 70,000 residents were temporarily without electricity. It is estimated that 150 households had lost their homes or were awaiting their fate. The local water system was destroyed. “So many leaks,” said Debra Garnes, mayor of Rio Dell, a small town on the banks of the Eel River.

The magnitude 6.4 earthquake, which struck at 2:34 a.m., was a further reminder of the forces that have shaped California for millennia — and the price that comes with living on the continent’s edge.

By late afternoon a sense of resignation had settled over the redwood-lined towns in this narrow floodplain only a few miles from the ocean.

Deborah Dobereiner, who lives at Fosters Mobile Home Park with her daughter and son-in-law, fled to the fire station. The earthquake was so strong, she said, that it ripped through the straps that attached her house to the ground, moving it about three feet.

“We’re not even thinking long term right now,” she said, unsure of where she and her family would be sleeping that night. “We just hope to hell we can still live there.”

As the aftershocks left everyone in suspense, residents began the clean-up effort with a mixture of resilience and tenacity. Many Humboldt County residents made their way to Eureka to pick up supplies at Costco, which was powered by a generator and had been open since 3:30 a.m

The malls off Highway 101 were dark. The Old Navy, Bed, Bath & Beyond, and Chipotle lots, which are normally crowded with vacationers, were empty.

Hardship in an economy largely sustained by the dairy and timber industries is no stranger. Residents are used to relying on each other, even if they suffer from tears and the occasional laughter.

Debbie Chisum, owner of Double D Steak and Seafood in neighboring Fortuna, oversaw staff and volunteers sweeping up broken wine and liquor bottles and joked how the place smelled like a New Year’s Eve party gone bad. Weeks of preparations for the holiday lay in tatters as their Christmas tree leaned on the ground.

Chisum had experienced earthquakes before and was used to their power. “They’re so noisy and all your stuff will fly out of the closets and end up on the floor,” she said. “Your house feels like it’s about to collapse.”

But this was different, she said.

“Honestly, I was just in tears,” she added, describing her reaction immediately after the tremors.

In the city that residents call the Kind City, wooden planks were soon covering broken windows and shopkeepers were busy sweeping glass.

When Heather Herrick, owner of boutique Haute Hoarder, checked the status of her vintage shop on Main Street, she was touched to find that the shop’s broken windows had already been covered.

A good Samaritan, she said.

In Rio Dell, bottled water was distributed to the local fire department. A librarian rearranged the hundreds of books that had fallen from the stacks and littered the floor. A boutique hotel in Scotia opened its doors to displaced people and neighbors comforted each other with yellow caution tape.

Retired firefighter Jose Beltran, now a member of the Volunteer Fire Department, gave out bananas and pastries while solving problems for locals who needed a hotel room or charging stations for medical equipment like dialysis machines.

His house looked like someone had picked it up and thrown it down, he said, making the inside look like a messy “yard sale.” Not long after the initial shock, he checked on his neighbors and made sure there were no gas leaks.

However, his main concern was his son, who is in a wheelchair with cerebral palsy. “I couldn’t go into his room right away,” Beltran said.

Theresa Adams recalled how the walls of her house were shaking and thought it wouldn’t stop. “It was horrible,” she said, describing how she lit some candles after finding a flashlight.

Then she went to her 80-year-old neighbor who uses a wheelchair. He was fine.

As night fell, Rio Dell fell silent, enveloped in a darkness deeper than usual. Temperatures began to drop into the low 50’s.

Still worried about the fate of their RV, Dobereiner and her family had found a hotel room. When she heard that she had a place to stay, she started crying. Her daughter’s boss would pay for it.

“We can’t do that on our own at the moment,” she says.

Mays and Rust reported from Humboldt County and Curwen from Los Angeles.

I was outraged when airline charged me £1,100 to take an extra suitcase on a flight

Blues bring win streak into matchup with the Kraken