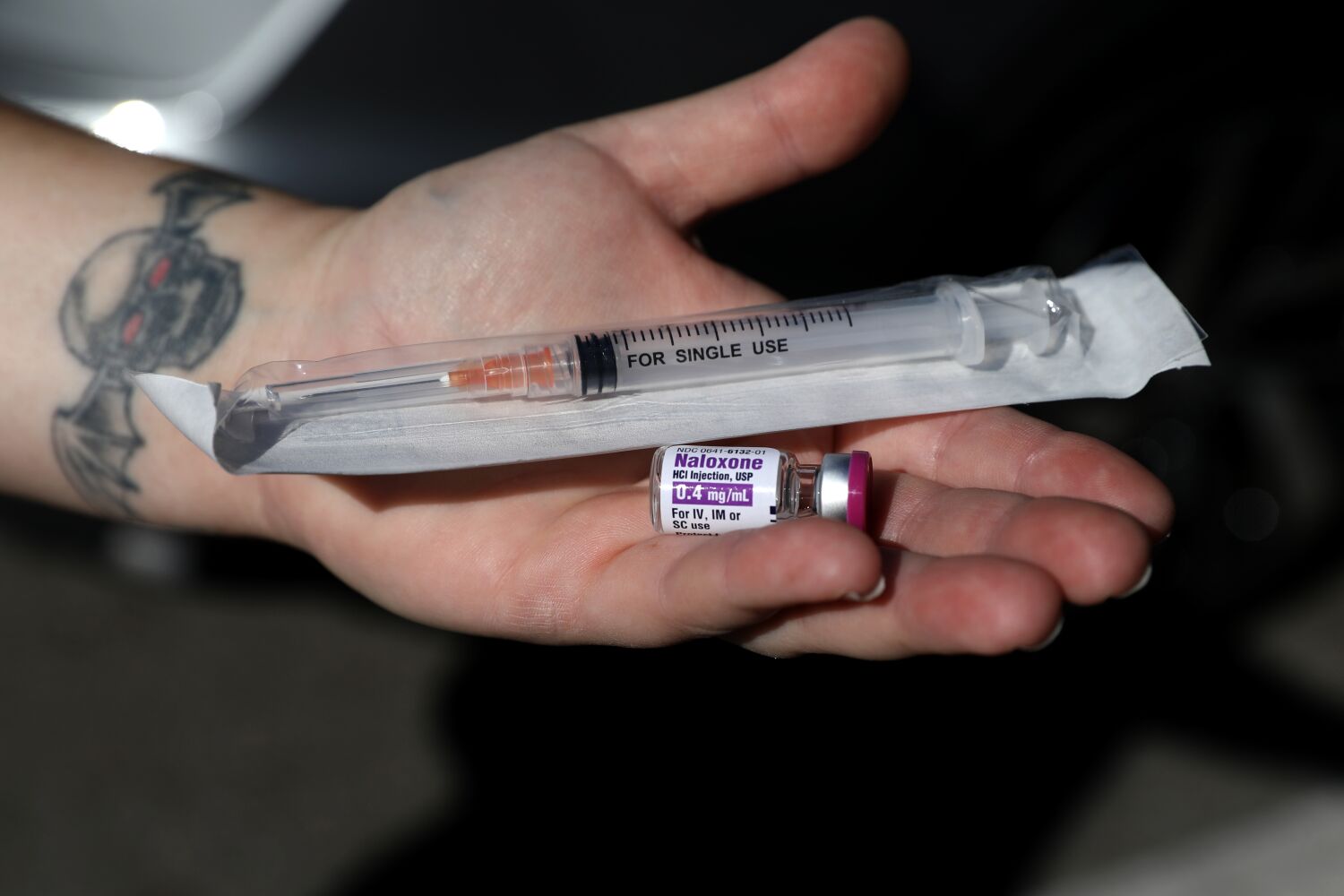 Los Angeles public schools will flood campuses with the overdose-reversal drug naloxone after the death of a student at Bernstein High School, putting the nation’s second-largest school system at the forefront of a strategy increasingly favored by public health experts.

The move, which will affect about 1,400 elementary, middle and high schools, is part of the district’s newly expanded anti-drug strategy, which was quickly put together in response to seven student overdoses over a three-week period involving students of the Bernstein campus and Hollywood High School. The plans, announced on Thursday, also include expanded outreach to parents and peer counseling.

The death of 15-year-old Melanie Ramos, who died in a school toilet last week after ingesting a pill she bought from another student, has shaken the campus community and parents across the 430,000-student district raised concern. The pill contained fentanyl, an opioid that is deadly in small doses.

Naloxone is highly effective in reversing opioid overdoses when administered quickly through a nasal spray or injection.

LA Schools Supt. Alberto Carvalho said that providing naloxone, also known by the brand name Narcan, was a matter of life-saving and that the drug could be administered quickly and with relative ease.

“We are dealing with an urgent crisis,” said Carvalho. “Research shows that the availability of naloxone, along with overdose education, is effective in reducing overdose and deaths – and will save lives. We will do everything in our power to ensure that no other student in our community falls victim to the growing opioid epidemic.”

Candidates for training would include school nurses and school police officers – but the scope would likely be larger. Carvalho gave the example of a deputy principal who had been a military medic.

“He can do it. He has the training,” Carvalho said in an interview. “I think we have a pretty short-sighted idea of ​​who can do it. The training really isn’t that hard.”

Older students also have the potential to be trained, but: “I’m not saying that we will do it here. But the training is not complex and we can greatly expand the number of people who can do it in a protective way.”

“Obviously, prevention is the best remedy,” Tsai said, but the Bernstein student’s recent death “would alone demonstrate the need to have naloxone on hand,” Tsai said. “It tells you that the students have been exposed in one way or another. And the likelihood of them being exposed on campus, bringing counterfeit pills, or coming into contact with counterfeit pills on campus is clearly a risk. It is necessary and appropriate that schools have naloxone on campus.”

California law permits, but does not mandate, K-12 schools to provide and administer naloxone. Michigan has implemented similar rules.

However, some California colleges and universities are required to stock the drug under a bill signed into law by Gov. Gavin Newsom in August.

Although access to naloxone in K-12 schools seems uncommon, it is not uncommon.

The Palos Verdes Peninsula Unified School District recently had a local doctor train all of the district’s registered nurses in administering naloxone, and it is available to them in that district’s high schools, Supt. Alexander Cherniss said.

Rhode Island requires all schools to have naloxone, and it can be administered by “any registered nurse” without fear of liability. School officials can also opt out of administration the drug. New York State offers four free doses of naloxone to every high school, but they don’t have to accept it. Currently, schools in New York City have no policy to stockpile it, a borough spokesman said.

The nasal version of naloxone is easy to use, experts said. The injection version requires the ability to use a needle and syringe. Naloxone will not harm anyone if that person overdoses on medications other than opioids, so it’s always better to use it in the event of a suspected overdose, according to the US Centers for Disease Control and Prevention.

The County Health Department provides free doses of naloxone to the county, which is also supported in this effort by the Los Angeles Trust for Children’s Health and Children’s Hospital Los Angeles.

County Health also assists the district in developing education and training materials. The county has secured enough cans for high schools to be distributed over the next two weeks. Training for district staff on the use of naloxone begins in early October.

The provision of naloxone in schools can be controversial. Some parents might interpret his availability as a school district giving up its ability to educate students on how to discourage substance abuse. Some may even fear it will encourage drug use, said Annette Anderson, associate director of the Johns Hopkins Center for Safe and Healthy Schools.

But she said parents needed to consider what she called an “explosion” in risk levels, noting that law enforcement had reported an increase in the number of illicit opioid pills seized from 300,000 in 2018 to about 10 million in 2021.

Research suggests that students were already facing a mental health crisis before the COVID-19 pandemic, which made the situation worse. Such trends underscore the need for additional steps beyond providing naloxone, she said.

“We are seeing an unprecedented number of violent events in schools,” Anderson said. “I think this is all part of a trend where our young people are struggling with what it means to get by in modern society. We, as caring adults, need to be more conscious of how we connect with our young people to help them learn how to solve problems, how to mediate conflicts – it’s youth development at heart. All of these issues really point to how COVID, and in particular the closure of COVID schools, is holding back the growth and social development of our young people.”

LA Unified’s announcement also emphasized approaches to mental health and prevention. The Health Information Project organization is brought in to train high school juniors and seniors to teach health education to their freshmen.

Parents’ awareness of how to recognize and manage substance abuse in their children is becoming a key focus of parenting efforts, Carvalho said.

The school system already provides substance abuse education at all grade levels – and it has been updated to include the risks of fentanyl. Such course materials and strategies are under ongoing review, officials said.

The law, which also requires the University of California Board of Regents to take similar action, goes into effect in January. The legislation “empowers students to prevent further needless deaths and ensures that perhaps one less parent receives a horrific phone call that will forever change their lives,” said State Senator Melissa Hurtado (D-Sanger), who introduced the statement after signing the invoice.

Gas prices are coming down — will inflation follow? Here’s what an economist thinks

Graffiti artist-turned-muralist sets the stage for a rockin’ Musikfest