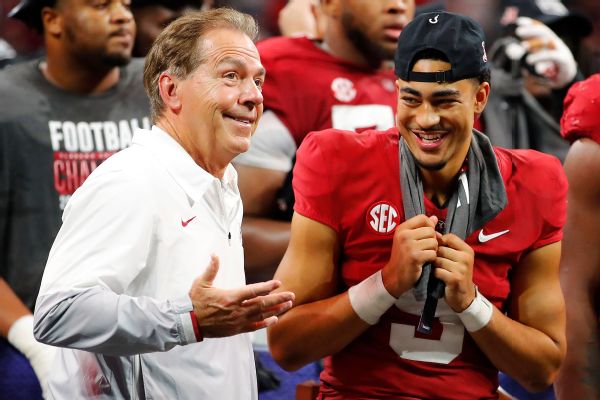 Alabama is the runaway favorite to win the SEC for a third straight year, according to a media poll released Friday.

The Crimson Tide received 158 out of 181 votes to win the conference title. Georgia was closest with 18 votes, South Carolina received three votes, and Vanderbilt and Texas A&M each had one vote.

Friday marked the seventh straight year that Alabama was selected to win the SEC championship, though the media has only correctly predicted the champion nine times since 1992.

Georgia, selected to win in the East, lost to Alabama in the SEC title game last season but won the rematch in the College Football Playoff National Championship Game in January.

“People ask the question: How does it feel to be the hunted?” Said Smart. “We’re not being hunted at the University of Georgia, I can promise you that. The hunt we do will go the other way from us. We will not sit back and be passive.”

Young, who threw for 47 touchdowns last season, is the reigning Heisman Trophy winner. Anderson led the country in sacks (17.5) and tackles for loss (34.5) and won the Bronko Nagurski Award, given to the best defensive player in college football.

“Having two players who make such a big impact on our team like these two guys, I can’t remember ever experiencing a circumstance like that,” Alabama coach Nick Saban said Tuesday. “We had some great players, but never one on offense, one on defense of that caliber.”

Justin Rose withdraws from The Open with back injury