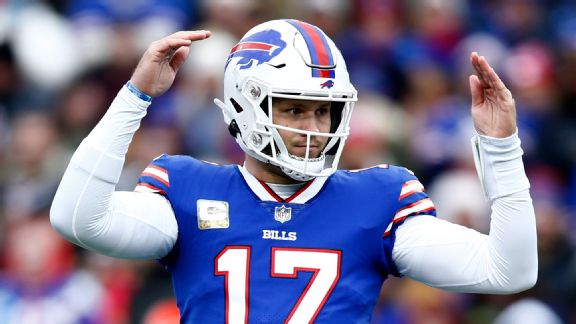 Sports betting must reach certain risk thresholds before the big bosses are brought into play. Sunday at Caesars Sportsbook hit those thresholds and alerted the big bosses to some potentially expensive results at the Minnesota Vikings-Buffalo Bills game.

Thanks to some up-and-down spread movement throughout the week, a Bills win of 4, 5 or 6 would have seen Caesars – and other sportsbooks – lose on both sides of many bets.

“The bosses were aware that 4, 5 or 6 wasn’t pretty,” said Craig Mucklow, vice president of trading at Caesars Sportsbook.

These possible outcomes were troubling for the book, as uncertainty about Bill’s quarterback Josh Allen had caused the point spread to change dramatically over the week. The line went from Buffalo’s -8.5 on Monday to -3 on Saturday morning as Allen missed most practice before Sunday’s game. The line began ticking back towards the Bills on Saturday afternoon after reports Allen would be active and expected to start. By Sunday morning, the line had grown back to Buffalo -6.5. The roller coaster ride for bookmakers and bettors was not over yet.

About an hour before kick-off, Allen was off the field during warm-up, and the line dropped back to Bill’s -5. Allen eventually joined his teammates on the field, and the line shot back to Buffalo -6.5 by kickoff.

“These things happen all the time,” John Murray, executive director of the SuperBook at Westgate Las Vegas, told ESPN. “[It’s] the battle between the bettors and the book to have the information first. Of course, when you’ve got a great player like Josh Allen, it’s even more important to keep in touch. But considering what we had to deal with last bowl season between COVID, the transfer portal, and the players sitting for the NFL draft, that was nothing. And that happens literally every day during the NBA regular season.”

The pregame drama reminded Adam Pullen, vice president of commerce at Caesars Sportsbook, that Los Angeles Chargers backup quarterback Chase Daniel was shown as a starter in place of Justin Herbert before a Week 3 game against the Jacksonville Jaguars.

“The picture of [Daniel] on the scoreboard triggered a wave of bets [on the Jaguars]’ Pullen recalled. “That’s how it is now. Every little tweet, every little report, everyone is trying to figure out what to do with that information.”

Pullen added that the Vikings got a “rash” of money after reports Allen wasn’t on the field to start warming up.

With 40 seconds to go, the Bills were up 27-23 and had the ball. A worst-case scenario for sports betting seemed likely. But Allen fumbled with a snap at the Buffalo 1-yard line, and Minnesota recovered for a go-ahead touchdown. The Vikings would win 33-30 in overtime.

A professional bettor in New York told ESPN he received a tip on how things would play out with Allen in the pregame warm-ups and placed bets on both sides of the game accordingly, giving him a chance to win big , if Buffalo wins by four.

“That Buffalo fumble was killer,” the bettor told ESPN in a social media direct message. “Buffalo of four got me everything, had mids all over.”

Mucklow reported that earlier in the week he took a pair of $25,000 money line bets on the Vikings to win the game from a keen bettor, but said overall, “We evened the game. Sometimes it’s a win not to lose.”

• The favorites are yet to have an overall winning week against the spread this season as the underdogs continued their winning streak on Sunday, paving the way for another successful week for sports betting.

• Caesars Sportsbook was “a little better” after the afternoon’s action and, according to Pullen, needed the underdog Chargers to cover the spread against the San Francisco 49ers in primetime play. The 49ers failed to cover the 6.5-point spread in a 22-16 win over the Chargers.

Pullen said the Arizona Cardinals’ surprise victories over the Los Angeles Rams and the Detroit Lions over the Chicago Bears were Sunday’s best games for the house. According to Pullen, the Miami Dolphins and the New York Giants, spanning the win span, were Better’s best game.

• Murray said Sunday was also positive for the SuperBook. “Certainly better than the last two weeks,” Murray told ESPN. “We had some positives in the morning with the Lions kinda winning that game and the Titans beating the Broncos. We got beaten to the Bucs this morning and the Dolphins didn’t play well but we had better volume and results than the last few Sundays so no complaints from me.”

• Tampa Bay regained the upper hand for the first time in eight weeks with a 21-16 win over the Seattle Seahawks in Germany. The Buccaneers have played 1-6-1 against the spread in their last eight games.

• The Tennessee Titans, meanwhile, covered the spread for the seventh straight week, the longest active streak of coverage in the league. The Titans are 7-2 against the season’s spread, tied with the New York Giants for best ATS record.

• Two big bets on the odds of winning the NFL MVP were among the most surprising bets of the week. Caesars reported taking a $20,000 bet on Buccaneers quarterback Tom Brady at 100-1 and a $5,000 bet on Tyreek Hill at 100-1 from a customer in Nevada. The bet on Brady would net pay out $2 million.

“No worries on our part if we make a bet like that,” Pullen said of the Brady bet.

• The Dallas Cowboys were picked as 2-point favorites over the Vikings in Week 11 in the marquee.

Notable opening lines about Circa Sportsbook

• Ohio State quarterback CJ Stroud remains the favorite to win the Heisman Trophy, which is listed -150 on Caesars Sportsbook. Tennessee quarterback Hendon Hooker is next at +375, followed by Michigan running back Blake Corum at +550.

• Tennessee has wagered more money to win the national championship than any other team at BetMGM Sportsbooks, where the Volunteers are 14-1. Tennessee has attracted almost three times the money as Georgia, the favorite. Busy time for sports betting.

As the college basketball season picks up steam, sportsbooks experience their busiest periods of the year.

Kevin Lawler, PointsBet’s Head of Trading for sports betting, called last week “the busiest week of the year in the book”.

“Interestingly, Monday was probably the busiest day that any team played in the NBA, along with nearly 200 college basketball games to manage and trade,” Lawler told ESPN.

DraftKings said it offers betting on 1,416 events across all sports on Saturday. Johnny Avello, a veteran Las Vegas bookmaker now at DraftKings, recalled being swamped in the past when college basketball season was ending and he had to do a lot more odds and bookies manually. He said although the process is much more automated today, the expanded betting menus keep him just as busy.

“We have better technology now than we used to have,” said Avello, “but we also offer so many more markets. In weeks like this, we were buried then and we’re buried now. And the World Cup is about to start. “