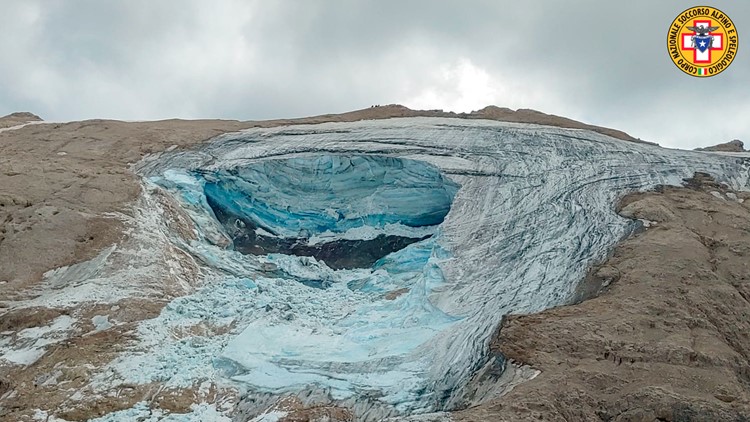 A large chunk of glacier in the Italian Alps has come loose, killing at least six hikers and injuring nine others.

ROME, Metropolitan Rome – A large chunk of an Alpine glacier broke loose on Sunday and thundered down a mountain in Italy, with ice, snow and rock slamming into hikers on a popular hiking trail at the summit, killing at least six and injuring nine. Authorities said and warned that the toll could rise.

A local civil protection officer, Gianpaolo Bottacin, was quoted by Italian news agency ANSA as citing the toll, but stressed that the situation was “evolving” and that perhaps 15 people could be missing.

Late that evening, the National Alpine and Cave Rescue Corps tweeted a phone number to call family or friends if “returning from potential trips” to the glacier “is not possible.”

Rescuers checked license plates in the parking lot as part of patrols to determine how many people might be missing, a process that could take hours, Corps spokesman Walter Milan told The Associated Press by phone.

The glacier in the Marmolada is the largest in the Dolomites of north-eastern Italy and skiing is practiced there in winter. But the glacier has been melting rapidly in recent years.

Experts at Italy’s state-run CNR research center, which has an institute for polar science, say the glacier will be gone in the next 25 to 30 years and much of its volume has already disappeared.

The Mediterranean basin, shared by southern Europe, the Middle East and North Africa, has been identified by UN experts as a “climate change hotspot”, which is likely to suffer from heat waves and water shortages, among other things.

Nationalities or ages of the dead are not immediately available, Milan said.

Of the survivors who were taken to hospital, two were in serious condition, authorities said.

The fast-moving avalanche “came down with a roar that could be heard a great distance away,” local online media site ildolomiti.it said.

Searches by helicopter and dogs for more victims or missing for the night have been temporarily halted while rescuers assess the risk of more breaking off the glacier, Walter Cainelli told state television after conducting a rescue mission with a search dog.

Rescuers said blocks of ice continued to fall. Light rain set in early in the evening.

The SUEM dispatch service, based in the nearby Veneto region, said 18 people who were above the area where the ice struck were being evacuated by the Alpine Rescue Corps.

Some of those doing the hike in the area where the avalanche broke were tied with ropes, according to local rescue services.

But Milan said some of the hikers might be able to come down themselves, including by using the summit’s cable car.

SUEM said the avalanche consisted of “a downpour of snow, ice and rock.” The severed section is known as the Serac or Ice Peaks.

Dubbed the “Queen of the Dolomites,” the Marmolada rises some 3,300 meters (roughly 11,000 feet) and is the highest of the 18 peaks in this eastern stretch of the Italian Alps, offering spectacular views of other Alpine peaks.

The Alpine Rescue Service said in a tweet that the segment broke off near Punta Rocca (Rock Point), “along the route normally used to reach the summit.”

It was not immediately clear what caused the section of ice to detach and fall down the slope of the summit. But the intense heatwave that has been sweeping Italy since late June has emerged as a possible factor.

“The temperatures of these days have clearly had an impact” on the partial collapse of the glacier, Maurizio Fugatti, the president of the province of Trento, which borders the Marmolada, told Sky TG24 News.

However, Milan stressed that the high heat, which has unusually soared above 10C (50F) on the Marmolada summit in recent days, was just one possible factor in Sunday’s tragedy.

“There are so many factors that could play a role,” said Milan. Avalanches in general are unpredictable, he said, and the impact of heat on a glacier “is even more impossible to predict.”

According to the rescue services, the injured were flown to several hospitals in the Trentino-Alto Adige and Veneto regions.

As in other natural disaster cases in Italy, prosecutors opened an investigation to see if there was any evidence of possible wrongdoing related to the avalanche.