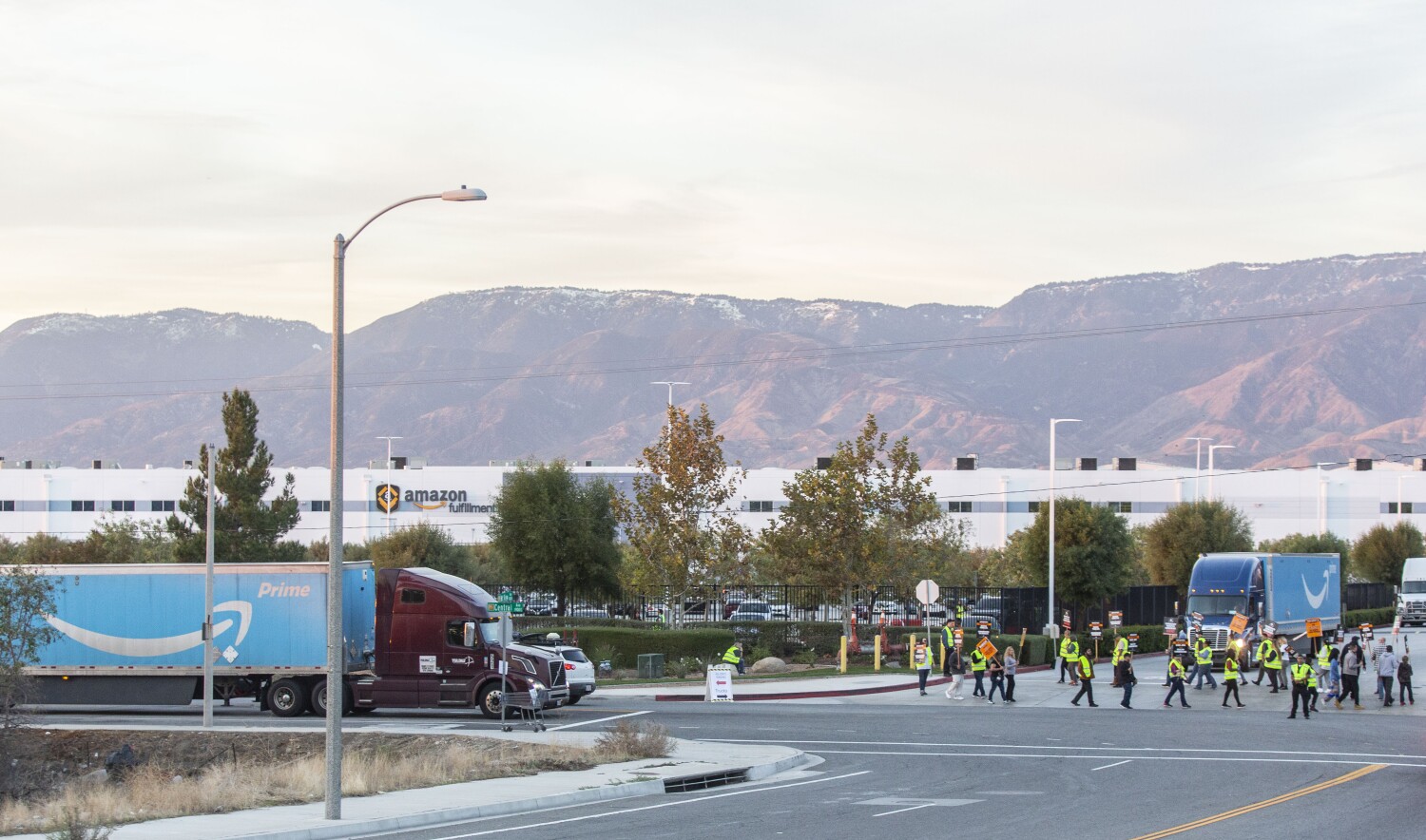 Organizers of a group called Inland Empire Amazon Workers United said in a Facebook post that 160 workers were exiting the San Bernardino International Airport facility, which is a critical part of Amazon’s logistics network and one of the company’s three U.S. “air hubs.”

In a statement, Amazon officials disputed the number and said 74 of around 1,500 employees at the facility had left.

About 900 workers at the San Bernardino Airport have signed a petition demanding that base pay be increased from $17 an hour to $22 an hour, Inland Empire Amazon Workers United said in a statement.

“Amazon could offer workers a higher standard, but they don’t,” said Sara Fee, who has worked at the air hub since it opened in March 2021. “A warehouse is just a warehouse. A company is just a company. The people make everything work and we are strong and united to fight for what we deserve.”

Amazon is the largest private employer in the Inland Empire, organizers said. Of the more than 200,000 warehouse workers in the region, one in five work at Amazon facilities.

“Amazon has promised quality jobs to the Inland Empire,” organizers said in another Facebook post. “They didn’t deliver. Amazon forced us to work in extreme heat, barely paid us enough to afford the rent, and now we are being retaliated for speaking up.”

Paul Flaningan, an Amazon spokesman, said the company respects employees’ rights to voice their opinions outside of the workplace and that there are “many established avenues” for employees to raise concerns internally.

“We are proud to offer a minimum starting wage of $17 an hour for full-time employees at our San Bernardino Air Hub and throughout the region,” Flaningan said. “Depending on their shift, our full-time employees can earn up to $19.25 an hour and receive industry-leading benefits, including health care from day 1, 401(k) with 50% corporate ownership, and up to 20 weeks of paid parental leave.”

Amazon officials are constantly listening to concerns and looking for ways to improve, he said, adding that the company offers competitive pay, comprehensive benefits and an “enjoying, safe work experience.”

In July, workers filed a petition demanding pay increases during Amazon’s Prime Week sales event, saying their wages are not enough to live on in Southern California.

“We can hardly afford to live in today’s economy,” the petition reads.

Temperatures at the airport reached at least 95 degrees for 24 days in July, organizers said.

When employees confronted managers, Amazon created an additional quiet area, but unsafe conditions remain “in many work areas,” it says.

“Working in the heat feels like suffocating,” said Melissa Ojeda, who has worked at the facility for more than a year. “You have to take breaks and you can overheat very easily. They don’t make it easy to take breaks to let the body cool down.”

When the San Bernardino air hub opened last year, organizers said, some in the community raised concerns about the quality of jobs at the facility and its impact on air pollution.

A 2018 study found that Amazon’s flights to and from airports in Riverside and San Bernardino counties released about 620,000 tons of carbon dioxide into the atmosphere and that the two counties had the worst ozone pollution levels in the country, pollution that was largely which was due to inventory management, according to Amazon Workers United.

Amazon operates 14 flights a day in and out of the 24-hour facility on the site of the former Norton Air Force Base, organizers said.

“Amazon has said its goal is to operate 26 flights per day,” they said. “The number of workers in the warehouse fluctuates, currently around 1,300 but more than 1,800 in peak season, showing the lack of stability of these Amazon jobs.”