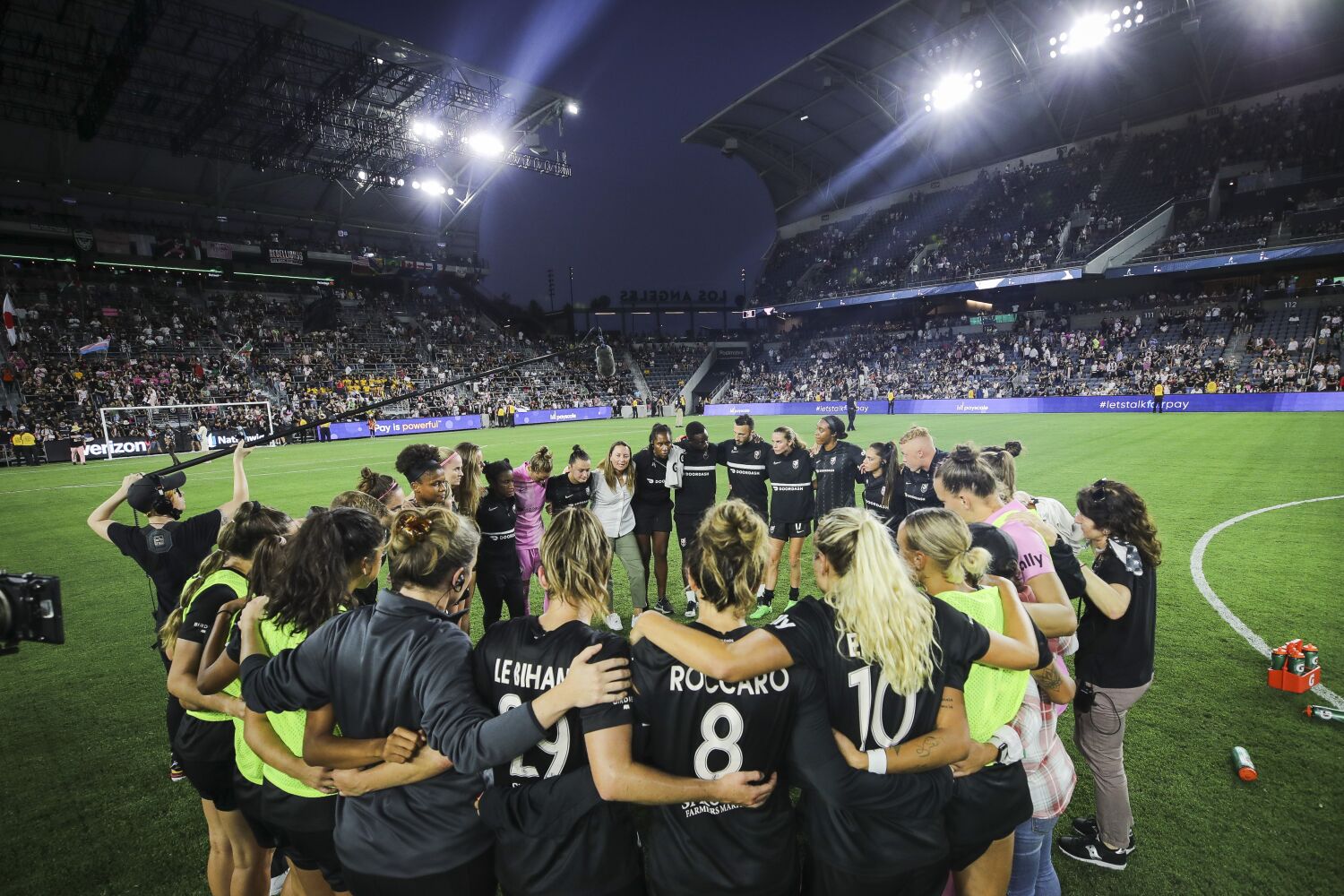 Angel City FC started Sunday with their playoff destiny in their hands. By the end of the day that had slipped through his fingers and now the team needs help if their first NWSL season is to extend beyond next weekend.

What happened in between was a 3-1 loss to Racing Louisville that took Angel City from hopeful to desperate with one game left in the regular season.

“That is past. There’s nothing we can do about it,” said midfielder Savannah McCaskill, who scored Angel City’s only goal. “Of course we would have liked to have come out of this game tonight with a win and still been in control. But we still have work to do.”

That job is to beat the Chicago Red Stars next Sunday — and cheer arch-rivals San Diego to a win over North Carolina on Friday.

The top six teams in the 12-team NWSL qualify for the postseason and Angel City is eighth, two places and two points below the playoff line. To get over that, the team needs both a loss in North Carolina and a win of their own.

“I think that’s doable,” McCaskill said. “I think it’s going to be the only time we cheer for San Diego.”

Much of this wouldn’t have been necessary if Angel City had just gone about the business. Instead, they have won just one of their last five, have not registered straight wins since May and given away seven points on goals conceded in the 82nd minute or later.

“If you think about some of the late goals we conceded, it was difficult to place ourselves in a table,” said coach Freya Coombe. “But at the same time, I feel like it’s a process that we have to go through and learn as a team because now we know what’s expected of us. We know how good we can be when we live up to the standard. We know what happens and what the consequences are if we don’t meet this standard.

“I don’t think we came out in the first half and played our best football and were punished for it.”

Coombe’s side, playing for the fifth time in two weeks, took the lead in the 14th minute when Jun Endo drilled a low right footed shot into a crowd in front of goal and found McCaskill in the midsection.

The ball bounced off McCaskill, hit the left post and then slipped past Louisville goalkeeper Katie Lund on its way across the goal line on the other side.

Louisville, without top scorer Nadia Nadim, who tore the anterior cruciate ligament in her left knee last week, responded with three unanswered goals, each after an error from Angel City.

The first came in the 37th minute when Kirsten Davis buried a shot from the left wing after a turn deep in Angel City’s end. Racing went on to stay five minutes later after Angel City’s Paige Nielsen flattened Louisville’s Lauren Milliet in the box and took a penalty which Alex Chidiac converted.

Then, with Angel City pushing for an equalizer in the last minute of regular time, Emina Ekic made the ice for Louisville by curling a left foot shot over Angel City keeper DiDi Haradic’s outstretched arm. The three goals Haradic has given up the most in one game this season.

“Whenever a goal is conceded, there is usually a mistake in the game. That’s how the ball lands in the back of the net,” said Coombe. “We made mistakes at both ends of the field tonight. And that again proved costly.”

But regardless of what happens with the playoffs, Angel City’s first season was successful. The team announced 22,000 spectators on Sunday, their fourth sellout in 11 home games, making Angel City the second NWSL team to average more than 19,000 per game. And the team will make more history when they reach postseason, as only one expansion team has done so in history.

That team was the San Diego Wave, who reserved their spot in the playoffs on Sunday.

“We showed we deserve to be a playoff team,” said Coombe. “I would much rather be in the driver’s seat and control destiny. But it’s now up to the state of California to help each other out. I’m not sure the rivalry will go that far, but we’ll see.”

iACT founders’ legacy continues to grow year after their death