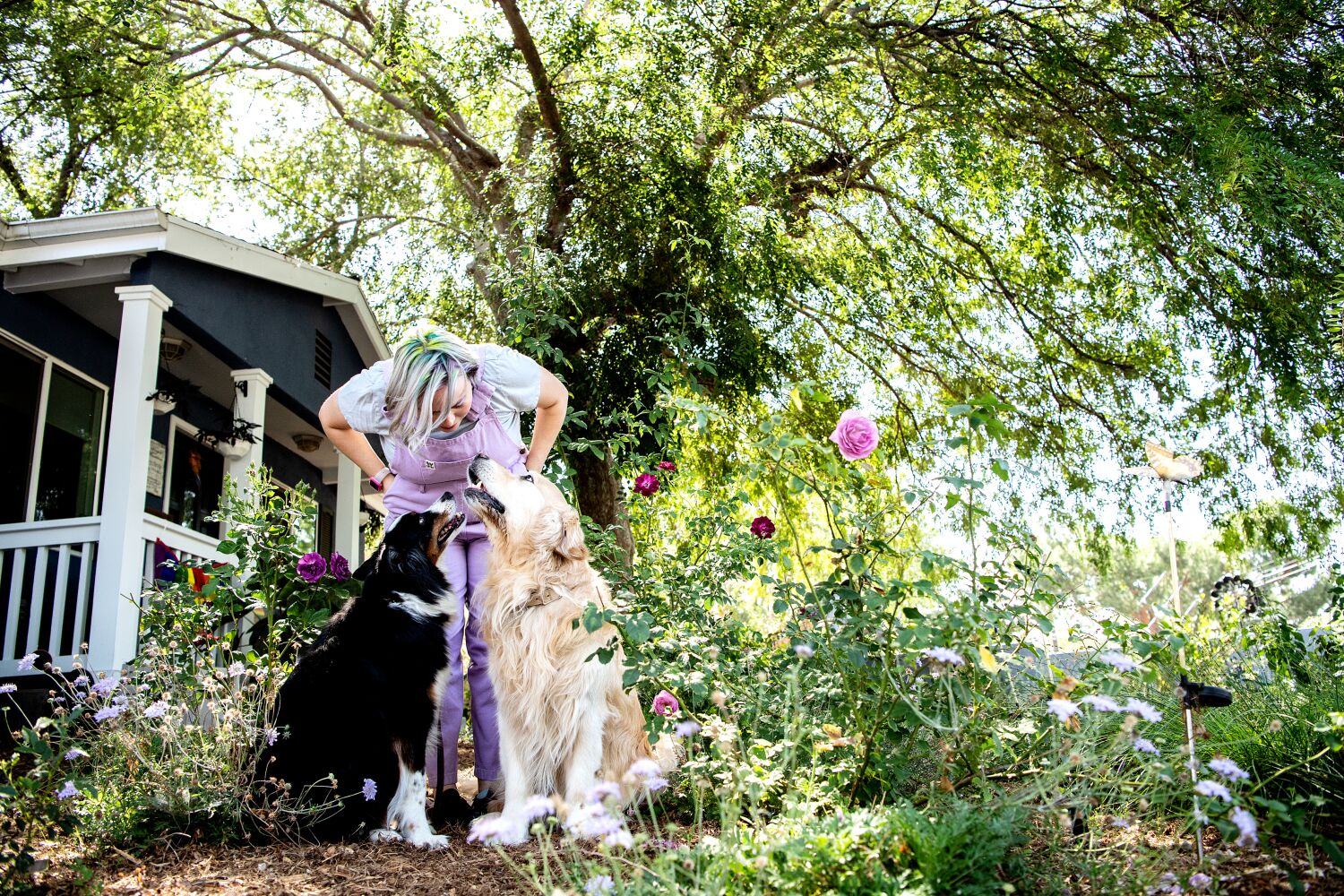 During a summer of rising heat, dwindling supplies and mandatory drought restrictions, Los Angeles residents saved water at an impressive rate in August, with consumption that month falling below a record low set during the previous drought.

But it is becoming apparent that this alone will not be enough. The crisis on the Colorado River, a major source of water for Southern California, is expected to cause painful supply shortages in the coming months. And hopes of a wet winter seem less likely given another dry La Niña year in the forecast.

Now there is pressure not only to increase savings, but to redouble efforts to reduce reliance on imported supplies and invest in long-term water solutions.

“We need to stop thinking of this as a response to these droughts and recognize that these droughts are becoming more frequent and severe,” said Heather Cooley, director of research at the Pacific Institute. “Actions we are taking now – and will continue to take after this drought is over – will be important going forward.”

The city’s nearly 4 million residents used about 10% less water in August than in the same month last year, despite last August being an average of 3 to 5 degrees hotter, the Los Angeles Department of Water and Power reported this week. It was the third straight month of such records, after falling 9% in June and 11% in July.

The numbers show a strong response to the new rules, which include two-day-a-week restrictions on outdoor watering for residents served by the DWP. Although conservation continues to play an important and immediate role in the region’s response, Cooley and others said improved water recycling and infrastructure, as well as improved responses from business, industry and government, will be required to reduce Northern California’s water dependency and to reduce the Colorado River.

“These numbers are an improvement, but they show that more can be done,” Cooley said. “We’re not done yet, and I think that’s good news because we face a hotter, drier future because of climate change.”

There are many signs of progress nationwide. DWP data from the previous severe drought shows a significant drop in supply levels in August – typically one of the hottest months of the year with the highest water use. The agency served 43,108 acre-feet to clients this August, compared to 46,427 acre-feet in August 2015, when cities and towns were required to reduce water use by 25%. An acre-foot of water is about 326,000 gallons, more than enough to power two to three homes for a year.

Mayor Eric Garcetti praised Angelenos for the cut this summer.

“When we realized there was an urgent need to reduce water use, for the third straight month, Angelenos did more than just heed our call – they answered it,” he said. “I think Angelenos are increasingly making conservation a way of life, not just something to take up because it’s a moment of crisis, but a kind of acknowledgment of the new abnormal.”

Garcetti said applications for turf replacement programs have skyrocketed under the new irrigation rules, including a roughly five-fold increase between June and September compared to the same period last year. He said those investments will pay off in the long run and may not even be reflected in the latest conservation data as many projects are underway.

However, he also acknowledged that the deepening crisis calls for an “all of the above” response.

“Of course we have to save first – you can do that in the short term,” he said. “But it keeps doubling our capture and sweeping away. And in the longer term, recycling will be the hardest and most expensive, but the ultimate insurance.”

Treated water accounts for 2% of the city’s drinking water. Officials are working to increase that figure to as much as 35% by converting the city’s oldest sewage treatment plant into an advanced water purification facility, among other projects. The goal is to recycle all available treated wastewater from the Hyperion water treatment plant into potable water by 2035, effectively providing another self-sufficient water supply for Los Angeles that will reduce the city’s dependence on imported water.

“I very much hope that my successor will ensure that we bring that number to 35 percent,” said Garcetti with a view to the upcoming Los Angeles mayoral election. “Anyone running for mayor would be foolish not to make sure that actually happens.”

Also underway is a remediation project in and around the San Fernando aquifer, a major source of groundwater for Los Angeles, Burbank and Glendale that has remained untapped for years due to pollution.

“Even in these very dry years, we have a lot of water that we are wasting that we could remediate and conserve in the San Fernando Valley,” he said. “As long as we continue to clean up this aquifer, I think that will also be a great place for long-term storage.”

Angelenos is not alone in her efforts. Overall, the 26 agencies that receive supplies from Southern California’s Metropolitan Water District, the region’s largest water wholesaler, have continued to keep consumption at or below allocations since the MWD ordered cuts earlier this year, according to data provided by the agency .

“The conservation we’re seeing right now and the performance we’re seeing – would that allow us to survive another year of drought? I absolutely think it would probably allow us,” he said. “But that’s not our goal. Our goal is not for people to be forced to take these emergency measures. We want people to continue to be efficient but to get to a point where conditions are a bit more normal.”

Like Garcetti, Upadhyay said water recycling projects will be key to achieving that goal, including an initiative called Pure Water Southern California, which will eventually produce up to 150 million gallons a day and significantly replenish supplies. When complete, he said, it will be the nation’s largest water purification program.

Smaller initiatives are also significant, including banning the irrigation of “non-functional” grass — like grass in decorative medians — as well as larger investments in water transportation, which will help MWD move supplies more freely within its distribution system, he said.

While the state’s reservoirs could see some storage increases over the next year due to a combination of management decisions and rainfall, Upadhyay said, “the same cannot be said for the Colorado River,” which is a much larger, slower-moving system that continues to waste .

The MWD is one of many California water districts that are under increasing pressure to curb Colorado River water use. The board is discussing extending the already existing concessions for areas dependent on the state water project to its entire service area to get there, he said. No official plans have been announced.

Now all eyes are on fall as the forecast heralds a rare third straight year of La Niña, a tropical climate pattern associated with dry conditions in the Southwest. There’s a strong possibility the pattern will continue through the winter, forecasters said.

However, officials noted that the water year, which runs from October 1 to September 30, is not over yet. It’s still uncertain if significant atmospheric flows or storms will show up this winter like they did last year despite La Niña.

“There is still a lot to see as the water year unfolds and supply conditions evolve,” said Sabrina Tsui, manager of resource development and watershed management at DWP. “The efforts of Los Angeles residents to this day are truly remarkable. We need to see how conditions develop over the coming months and see what else is needed and what the Metropolitan Water District can provide to its member agencies for the next year.”

While urban areas like Los Angeles require a significant amount of California’s water, they’re far from the thirstiest sector in the state. This title goes to agriculture, which accounts for about 80% of the water that is diverted and pumped for human use. Though many farms and irrigation districts have run out of supplies and left fields fallow, officials said more savings could be made.

Cooley of the Pacific Institute noted that other sectors, including businesses, governments and institutions such as hospitals, schools and prisons, can also scale up their efforts by improving their processes and transforming their landscapes, among other things. Even water utilities could do more by checking for and reducing leaks.

Individual conservation efforts add up, she said, including transitioning to drought-tolerant landscaping and installing more efficient equipment. A recent study by the Pacific Institute found that a variety of existing technologies and standard practices could help reduce overall urban use in the state by up to 48%.

“With efficiency, we can do the things we want to do with less water,” she said. “We can still wash our clothes. We can still shower, flush our toilets, and even have beautiful, vibrant landscapes. We just make different decisions.”