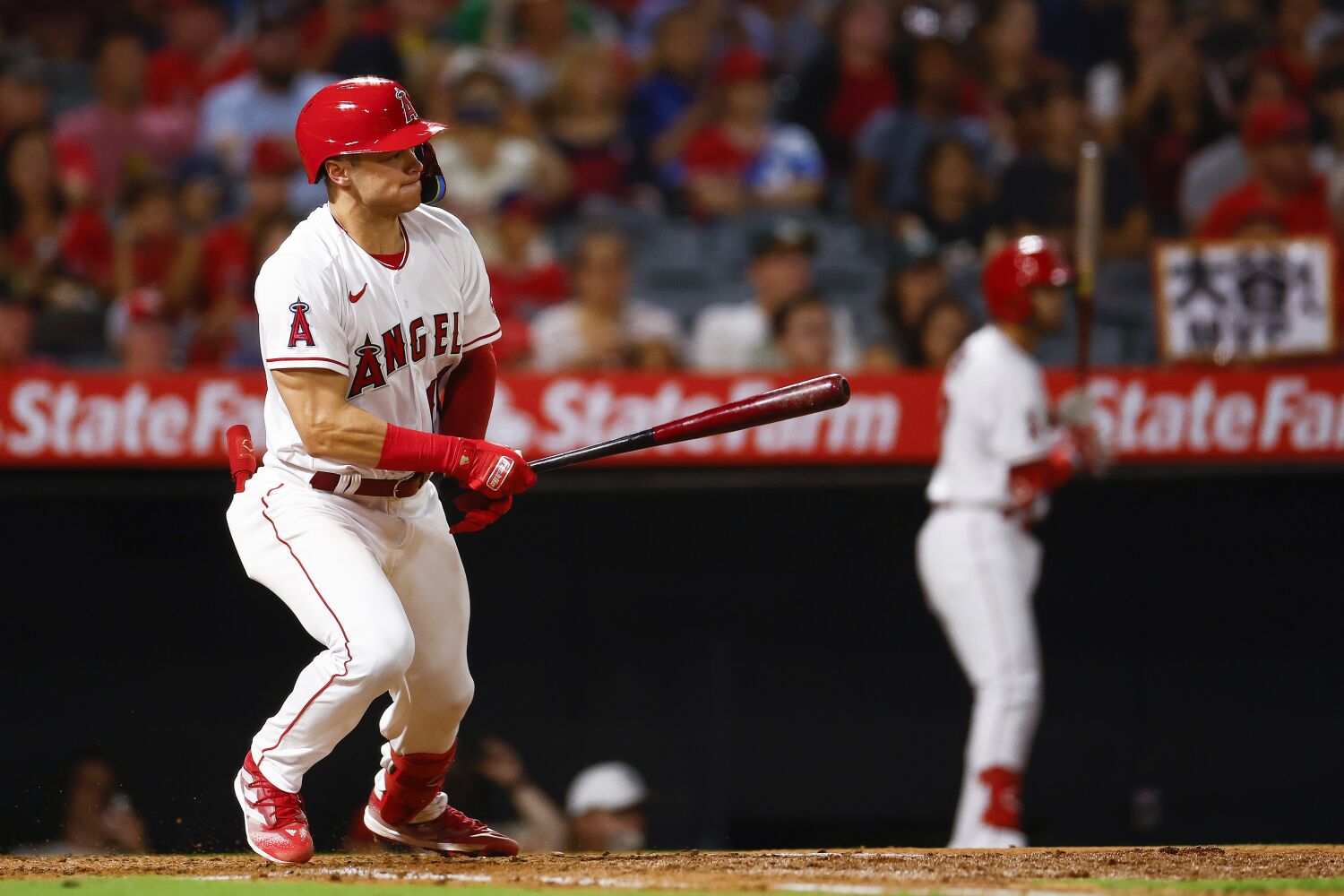 Angels No. 1 Logan O’Hoppe made his major league debut in a 4-1 win over the Oakland Athletics on Wednesday. After dominating this summer with the Angels’ Double-A-Team, he was placed in the Cab squad early Tuesday and called up less than 24 hours later.

In the first inning, with runners at the corners, Seth Brown started first. O’Hoppe emerged from his crouch, but instead of throwing, he faced the third.

In the fifth inning, Tony Kemp broke through for a second time and when O’Hoppe raised his arm back he dropped the ball behind him.

Beginner slip-ups, to be sure. But overall, his debut as a big league catcher was a success.

There were some nerves on the record. On his first at-bat, O’Hoppe hit and missed the first two pitches of A’s starter Adrian Martinez, both sliders, but wasn’t fooled by the next two, a sinker and a changeup. The at-bat’s sixth pitch, another sinker, O’Hoppe jumped up for a single to center, his first major league hit. He landed and struck with his next two At-bats.

Most importantly, he helped Lorenzen and four assists limit the A’s to five hits, and homers from Mike Trout and Taylor Ward highlighted the Angels’ third straight win.

“I’ve been thinking a lot the past few days or so,” O’Hoppe said ahead of the game, “and what I’m most proud of is that I’ve worked my whole life to get here to prove it the people i love, right. I was always motivated to let these people believe in me and to prove them right.”

The people he loves the most had a pretty good spot for that first hit, in the second row behind the first dugout. He made her proud long before he waved to the crowd at Angel Stadium after scoring the first goal.

“People say they’d love to do this one day, but to actually do it is extraordinary,” Logan’s mom, Angela, said. “And he just wanted it that way, by always getting it right, and I’m so proud of him.”

For as long as can be remembered, O’Hoppe and his family have loved baseball.

He recalled knocking off a plastic T-shirt as a child in the backyard of his family’s home in Sayville, NY. “It sounds cliche, but it’s true.”

His mother remembered the 2-year-old boy falling asleep with his bat. “And then it’s his first tee ball game and then his first [Little League] home run,” she added. And there was always one rule that O’Hoppe’s parents had in particular: “Play with class, or don’t play at all.”

O’Hoppe, now 22, was told Tuesday night he would be making his debut on Wednesday. In that moment, his baseball life up to that point was playing out in a series of happy memories in his head.

“It’s funny, I haven’t given much thought to my minor league career for the past few days; I thought about those moments the most,” he said before the game.

O’Hoppe was in the Phillies’ minor league system until this summer, when he was part of a deadline trade that sent Brandon Marsh to Philadelphia. In the 32 games he played at Double-A Rocket City, O’Hoppe recorded 32 hits, scored 25 runs, drove in 34 runs and had an on-base plus slugging percentage of 1.104.

O’Hoppe — who was drafted by the Phillies at St. John the Baptist High School in West Islip, NY in 2018 as No. 677 — also thought of all the people who helped him get to this moment, one of whom some have made the trip to Anaheim.

His parents booked flights within hours of learning he was due to make his debut. They arrived at Angel Stadium before the gates opened at 5 p.m. His twin sister Mel flew in on Tuesday to see him in his Angels uniform. Former coaches and friends also attended his debut.

They were joined by a contingent of more than 15 people, including family friends, former coaches such as his old catch coach Tom Downey and high school coaches Casey and Ronny McKay, and some of O’Hoppe’s friends.

Third baseman Anthony Rendon was reinstated on Wednesday from the injured list and began his five-game ban for his role in a brawl with the Seattle Mariners.

With seven games remaining, Rendon has an opportunity to return to the lineup before the end of the season.

Prior to his reinstatement, Rendon completed his second day taking live pitches from Angels minor leagues.

“I was going to push myself to come back to work this year but if not, that’s fine,” said Rendon, who didn’t want to end the season on the injured list for a second season in a row. “I didn’t want to leave anything behind and be like, ‘Oh, I could have been activated somehow.’ I wanted to make sure I gave myself every opportunity.”

He also credited Kurt Suzuki, his longtime teammate who plans to retire after this season, for motivating him to keep working hard.

Team film session may have been just the spark Lakers needed