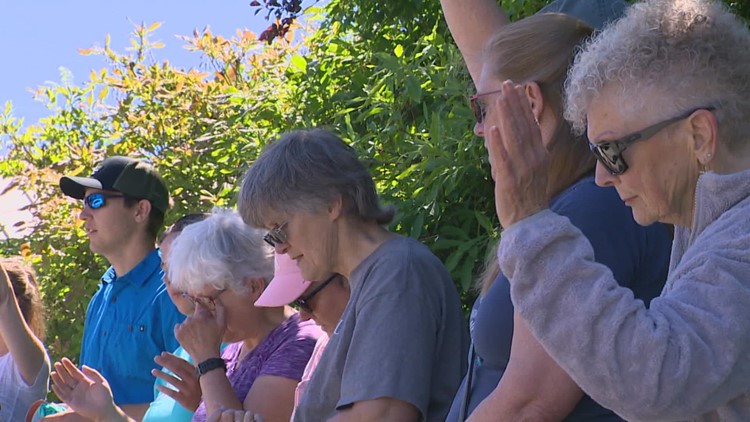 Activists gathered for a previously scheduled vigil in front of an Everett Planned Parenthood.

EVERETT, Wash. — Half a century after a woman’s right to an abortion was guaranteed in the Constitution, the United States Supreme Court struck down it on Friday.

“It’s kind of surreal,” Pastor Daniel Parks said. “It’s amazing that it actually happened, but it wasn’t the Supreme Court. It was the work of God.”

Parks flew to Washington from North Carolina to organize churches in his fight against abortion. He held a prayer vigil with about two dozen pastors and churchgoers in front of the Everett Planned Parenthood clinic.

“Every human being is valuable to the Lord and should be valuable to us as a society,” he told them.

Parks is part of an anti-abortion group called Love Life.

On Friday they prayed for the women, workers and fetuses at the clinic.

He said the church needs to do more to support women seeking abortions and hold men more accountable for their role in pregnancy.

He also compared what happens in abortion clinics to school shootings.

“If we knew where there would be a school shooting tomorrow, wouldn’t we be there?” he asked. “I’m just kind of comparing it, when we see people’s lives that have been shattered, we should grieve about it. These are all human beings created and dying in the image of God. We have to raise our voice and do something.”

It didn’t take long for the group’s presence to attract opponents. Some drove by and hurled obscenities. A man parked his car in the middle of the street to debate and bombard one of the pastors present with questions.

“They just want to live their lives,” he said. “What right do you have to come into someone’s bedroom? Would you be okay if someone tells your daughter that she has to raise a child that you put into her as her father to protect her, that she now has to carry to full term or even a raise?”

But members remained resolute, praying that en route to the clinic, women would experience the “supernatural” and “get a call or see a billboard” that would change their minds about the procedure.

“God, we need you to intervene in the lives of these women,” one person said.

“Lord, show her your love for her child,” prayed another.

Among those gathered were many women – mothers and daughters – but none of them voiced the slightest contradiction.

Inside the effort to recall Los Angeles D.A. George Gascón