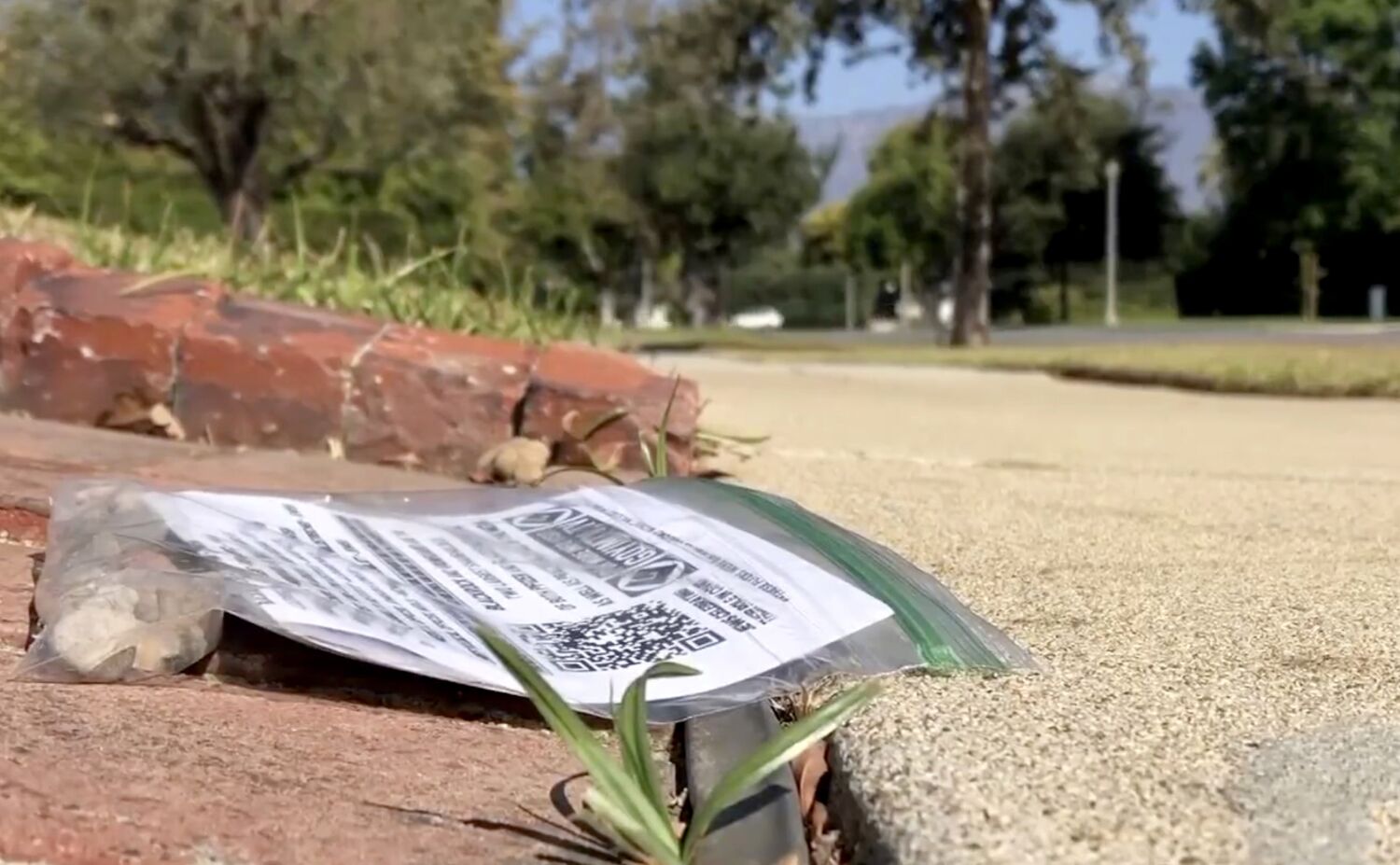 Plastic bags containing flyers with anti-Semitic messages were left on driveways and outside homes in San Marino and Pasadena on Tuesday night, at the start of the Jewish holiday of Yom Kippur, authorities said.

A San Marino resident noticed that someone had placed a flyer in his driveway and reported the incident to police around 11pm. Flyers were left in multiple driveways across the city of San Gabriel Valley, but the placement appears to be random and not targeted at specific groups in the neighborhood, San Marino Police said.

The items were placed in plastic bags with stones and contained anti-Semitic messages and COVID-19 conspiracies. The flyers said they were “distributed indiscriminately without malicious intent,” police said in a Facebook post.

There were no reports of property damage or other activity related to the incident. Police questioned residents, and some offered to share surveillance footage from their homes if they could spot suspicious people or vehicles. Detectives will be investigating the incident, but San Marino was not alone because leaflets were also found in the southern part of Pasadena, according to Lisa Derderian, a city spokeswoman.

The leaflets were found Wednesday morning and police said they documented the addresses where they were left. Police said they would also step up patrols in the area.

“The City of Pasadena takes a zero-tolerance position toward all forms of hate speech, which has no place in our city, particularly on the highest Jewish holiday of the year,” the City of Pasadena said in a written statement. “The distribution of [antisemitic] flyer violates the values ​​of our city and its residents. We recognize that many have been hurt by these disgusting acts and know that Pasadena residents stand together and speak out against hate in all forms.”

Jeffrey Abrams, Los Angeles regional director of the Anti-Defamation League, said the group behind these anti-Semitic acts is small but growing.

“We know who these people are. They target predominantly Jewish communities and hide behind the First Amendment when distributing leaflets about these neighborhoods,” Abrams told the Times. “Make no mistake, the purpose is to terrorize these communities.”

While Abrams urged people not to share images of the anti-Semitic leaflets on social media, he encourages the media to report when these incidents take place.

“Anti-Semitism lives and grows in our city,” Abrams said.

In April, on the morning after the first Passover seder, anti-Semitic leaflets were left on the front doors of homes in Beverly Hills. The leaflets began with the statement, “Every single aspect of the war between Ukraine and Russia is Jewish,” followed by a list of government officials.

https://www.latimes.com/california/story/2022-10-06/antisemitic-fliers-los-angeles-yom-kippur-jewish-holiday Antisemitic fliers left at homes at the start of Yom Kippur

Sabotage and War in Cyberspace