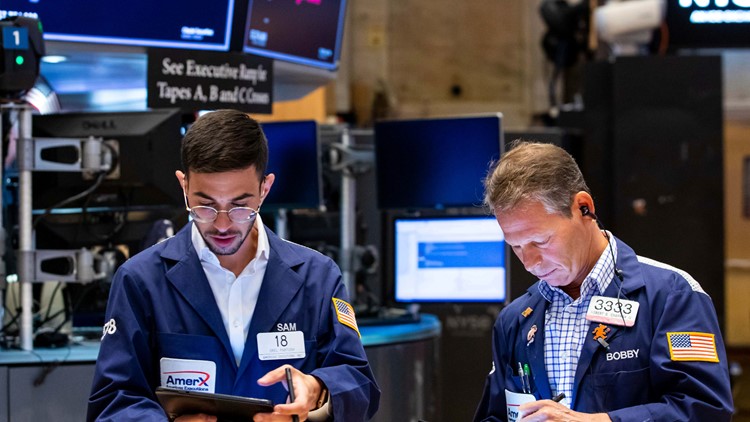 It’s only been two years since the last bear market, but since then many people have started trading on their phones. Here’s what you should know.

NEW YORK – Wall Street is back in the clutches of a bear market as worries about inflation and higher interest rates overwhelm investors.

The Federal Reserve has signaled it will aggressively raise interest rates to try to control inflation, which is at its highest in decades. Add to that the war in Ukraine and a slowdown in China’s economy, and investors have been forced to reconsider what they are willing to pay for a wide range of stocks, from high-profile tech companies to traditional automakers. Big swings have become commonplace and Monday was no exception.

The last bear market was just two years ago, but this is still a first for investors who started trading on their phones during the pandemic. Thanks in large part to extraordinary action by the US Federal Reserve, stocks have seemed to be going in only one direction for the most part: up. But the ‘buy the dip’ rallying cry popular after every market slide has waned – a recent rebound in share prices has been wiped out by a furious sell-off over the past four days.

Here are some frequently asked questions about bear markets.

Why is it called a bear market?

A bear market is a term used by Wall Street when an index like the S&P 500, the Dow Jones Industrial Average, or even an individual stock has fallen 20% or more from a recent high for an extended period of time.

Why Use a Bear to Represent a Market Drop? Bears hibernate, so bears represent a market that is retreating, said Sam Stovall, CFRA’s chief investment strategist. In contrast, Wall Street’s nickname for an emerging stock market is bull market because bulls charge, Stovall said.

Market Enemy #1 is interest rates, which are rising rapidly due to high inflation plaguing the economy. Low interest rates are acting like steroids for stocks and other investments, and Wall Street is currently in retreat.

The Federal Reserve has moved aggressively away from supporting financial markets and the economy with record low interest rates and is focused on fighting inflation. The central bank has already raised its short-term policy rate from its near-zero record low, which had encouraged investors to allocate their money to riskier assets such as stocks or cryptocurrencies for better returns.

Last month, the Fed signaled that more rate hikes of double the usual amount are likely in the coming months. Consumer prices are at their highest level in four decades, up 8.6% yoy in May.

The proposed moves will slow the economy by making borrowing more expensive. The risk is that the Fed could trigger a recession if it hikes rates too much or too quickly.

Russia’s war in Ukraine has also put upward pressure on inflation by pushing up commodity prices. And worries about China’s economy, the second largest in the world, have added to the gloom.

RELATED: Multiple factors are converging to drive up gas prices

So we just need to avoid a recession?

Even if the Fed can handle the delicate task of containing inflation without triggering a downturn, higher interest rates will still put downward pressure on equities.

When customers pay more to borrow money, they can’t buy as much, so less revenue goes to a company’s bottom line. Stocks tend to track gains over time. Higher interest rates are also making investors less willing to pay higher prices for stocks, which are riskier than bonds, when bonds are suddenly paying more interest thanks to the Fed.

Critics said the overall stock market came into the year expensive compared to history. Big tech stocks and other winners from the pandemic have been seen as the most expensive, and these stocks have been penalized the most as interest rates have risen. But the pain is spreading, and retailers are signaling a shift in consumer behavior.

According to Ryan Detrick, chief market strategist at LPL Financial, stocks have fallen nearly 35% on average when a bear market coincides with a recession, compared to a nearly 24% drop when the economy avoids a recession.

So I should just sell everything now, right?

If you need the money now or want to hedge the losses, yes. Otherwise, many advisors suggest riding through the ups and downs and remembering that the swings are the price of entry for the stronger returns that stocks have delivered over the long term.

While stock dumping would stop the bleeding, it would also prevent potential gains. Many of Wall Street’s best days have come either during a bear market or shortly after it ended. That includes two separate days in the middle of the 2007-2009 bear market, when the S&P 500 gained about 11%, as well as jumps of more than 9% during and just after the roughly month-long bear market of 2020.

Advisors suggest investing money in stocks only if it will not be needed for several years. The S&P 500 has bounced back from each of its previous bear markets, only to eventually rally to yet another all-time high.

The bearish decade for the stock market after the dot-com bubble burst in 2000 was a notoriously brutal stretch, but stocks were often able to regain their highs within a few years.

How long do bear markets last and how deep do they go?

History shows that the faster an index enters a bear market, the flatter they tend to be. Historically, stocks have taken 251 days (8.3 months) to fall into a bear market. If the S&P 500 has fallen 20% faster, the index has lost an average of 28%.

The longest bear market lasted 61 months, ending in March 1942 and dropping the index by 60%.

How do we know when a bear market is over?

In general, investors are looking for a 20% gain from a bottom and sustained gains over a period of at least six months. It took less than three weeks for shares to surge 20% from their March 2020 low.

'Station Eleven': A story about the need for stories

CBS ‘The Young and the Restless’ Spoilers: Nikki Demands Answers from Jack; Sally Questions her and Adam’s Future