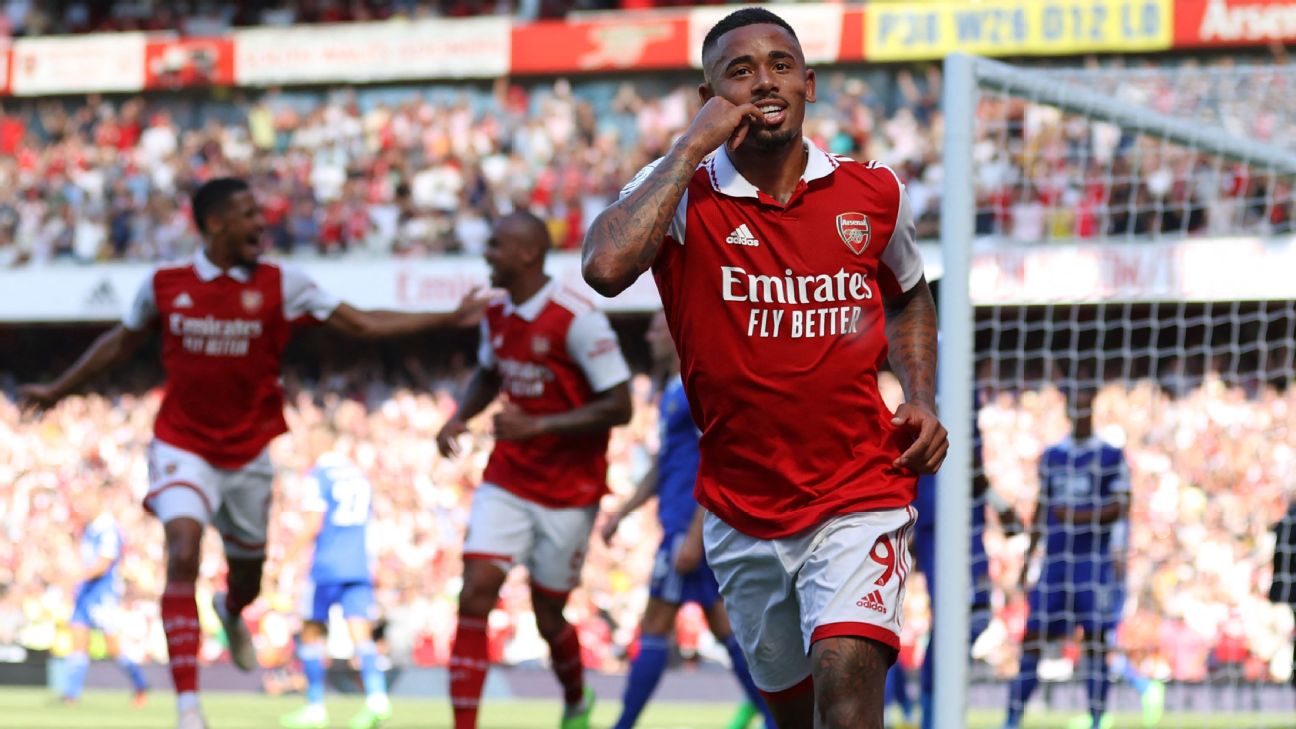 Arsenal continued their positive start to the Premier League season as they clinched all three points in a 4-2 win over Leicester City at the Emirates Stadium on Saturday afternoon.

A graceful finish from Gabriel Jesus ensured the hosts opened the scoring in the first half as the 25-year-old flicked the ball past Danny Ward into the Leicester goal and it wasn’t long before the Brazil international secured his brace a header at the far post after Jamie Vardy failed to clear the ball out of harm’s way.

The Foxes found hope in the second half after William Saliba headed an own goal past Aaron Ramsdale from half the deficit, but a mistake from Ward just moments later allowed Granit Xhaka to restore his side’s two-goal lead.

Brendan Rodgers’ side got back into the game in the 74th minute as James Maddison beat Ramsdale, although there was déjà vu when Gabriel Martinelli scored Arsenal’s fourth goal just over a minute later and Mikel Arteta helped make changes see the game.

A standout performance from Arsenal saw them take the game to Leicester in a game they dominated over the 90 minutes. Leicester had no response for Arteta’s press and that allowed the Gunners to regain possession on a consistent basis.

The Gunners will need to ensure they stay focused in future games after conceding two avoidable goals.

8th – Arteta made his intentions clear from kick-off with an attacking setup that Leicester struggled with. The home side created many chances in the 90 minutes but their pressing from the front was just as impressive.

GK Aaron Ramsdale, 6 — A strong hand prevented Vardy’s cross from reaching the back post and that set the tone for Ramsdale, who reacted quickly to dangerous situations. The Gunners’ No. 1 should have hit Maddison’s goal better, however, as the ball went through his legs from a low angle.

DF Oleksandr Zinchenko, 7 – Zinchenko regularly tried to stretch the game, taking on the reverse full-back role at some points, which often caused problems for Leicester’s defence.

DF Gabriel, 6 – Gabriel looked comfortable throughout the game, although he didn’t deal much with Leicester struggling to create chances after the opening 10 minutes.

DF William Saliba, 5 — Saliba headed the ball past his own keeper under pressure, but while he didn’t live up to his high standards in Arsenal’s opening game, it wasn’t something that defined his overall solid performance at the heart of defence.

DF Ben White, 6 – White has endured the task of dealing with Leicester’s attacks well as the Foxes looked to exploit him in his less preferred right-back position. A strong challenge prevented Patson Daka from making an impact when he was introduced.

MF Thomas Partey, 6 — A precise pass almost sent Xhaka on target and the Ghana international seemed comfortable in the center of the pitch, although Arsenal’s pressing rarely allowed Leicester to create anything of note in the central areas.

MF Granit Xhaka, 7 – He made a series of instinctive runs and eventually got into the scorer list after Ward’s mistake. The Switzerland international also provided strong cover at moments when Zinchenko advanced down the left channel.

MF Martin Odegaard, 6 – Odegaard was one of Arsenal’s quieter midfield stars as Arteta’s side favored attacking down the left channel, but the Norway international was adept at possession and tried to gradually change the game. Positive runs helped stretch the defense on counterattacks.

FW Gabriel Martinelli, 8 — The 21-year-old forward kept trying to challenge defender Wesley Fofana and tried to win the fight by isolating him. Gabriel Jesus should have picked a strong run in the first half.

FW Gabriel Jesus, 10 — A sensational finish saw No 9 Arsenal grind the ball over Ward to put the Gunners 1-0 up and it wasn’t long before he secured his brace with a close-range header at the far post. The Brazil international was unplayable that day and was directly involved in all four goals as he also provided two assists.

FW Bukayo Saka, 7 — Saka worked hard at both ends of the pitch, with the England international making sure White had some defensive cover. A few good balls into the box created questions for the Leicester defence, with Xhaka close to converting one of them.

Takehiro Tomiyasu (White, 75″) N/R –– Introduced for White when Arteta started to line up his team to see the game through.

Kieran Tierney (Zinchenko, 77″) N/R – Tierney connected well with Xhaka when he came on and was close to getting an assist with a precise ball into the box before the offside flag was raised.

Eddie Nketiah (Jesus, 84″) N/R – Nketiah looked bright as he continued to work the Leicester defense with bright runs behind the defensive line.