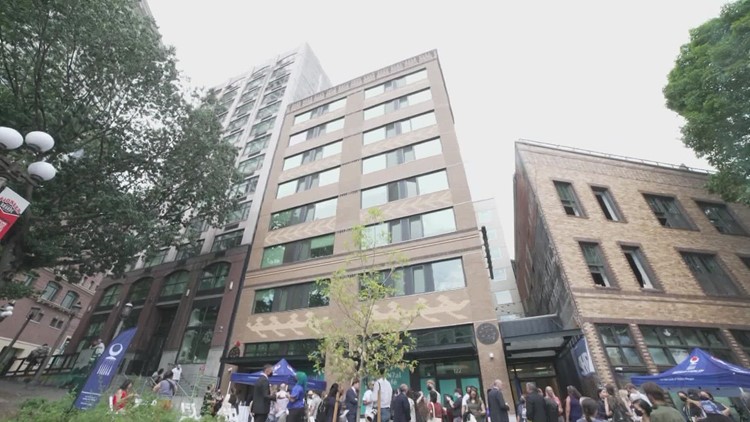 The clinic will offer basic medical care as well as indigenous medicine such as blessings, discussion groups and a sweat lodge.

SEATTLE – A new medical clinic in downtown Seattle will extend its services to the area’s homeless.

The Seattle Indian Health Board (SIHB) held a grand opening ceremony for its new expansion clinic in Pioneer Square on Thursday.

SIHB President and CEO Ester Lucero said the clinic will fill a critical gap in services to the area’s homeless. It will also provide accessible healthcare to those living in affordable housing at the Chief Seattle Center next door.

“They have 5,000 members, Native Americans, Alaskan Natives who attend the Chief Seattle Club. And in our database at the Seattle Indian Health Board, which is just up the road, we only saw 500. So we realized we really needed to provide services to people where they were,” Lucero said.

According to data released last month by the Centers for Disease Control, the overdose death rate among tribal peoples increased by 39% in 2020 compared to 2019. Fatal drug overdose rates among Indigenous women aged 25 to 44 are almost double those of white women of the same age. The data also showed that ultimately only one in ten Aboriginal people reported receiving treatment for substance abuse.

“[Programs are] needed now more than ever,” said Lucero. “I also think it’s very important for us to educate communities. So think about peer-based narcan programs. Those are things we can actually teach people.”

Dawn Rodriguez knows what it’s like to get by without medical care. Rodriquez was formerly homeless and has been living in affordable housing at the Chief Seattle Club, a Native-run non-profit housing and social services organization, since January.

“I see a lot of other natives just living here on the streets … and if they just walk by, nobody will help them,” Rodriguez said. “Many of the elders here don’t have rides and I know it will be very good for them if they get their medication right here. Including myself. I can just come down now and don’t have to walk long distances.”

The clinic will be staffed by two full-time doctors Monday through Friday from 8 a.m. to 5 p.m. Newcomers are welcome.