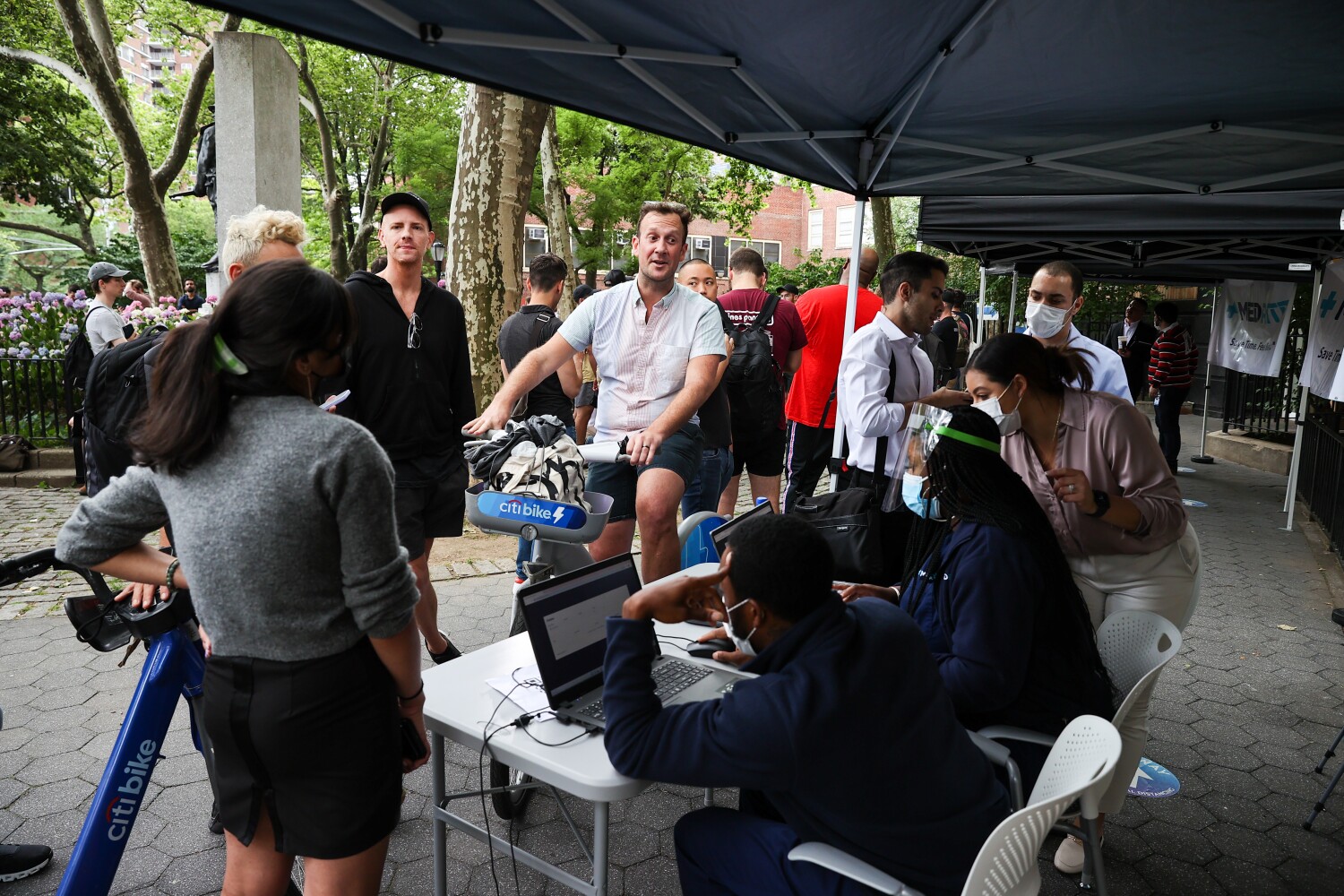 Community health and LGBTQ rights leaders in California are calling for government and health officials to have a much more aggressive response to monkeypox, saying the lack of vaccines and limited outreach are making the outbreaks worse.

Confirmed cases of monkeypox across California have risen 65% from 85 to 141 in the last week. As of Thursday, Los Angeles County had 47 confirmed and probable cases of the virus — up nearly 60% since last week — and in San Francisco, cases have more than doubled over a similar period, going from 16 to 40.

While monkeypox isn’t nearly as contagious as the coronavirus, officials said they were concerned about the rise in infections. Cases in both counties are spreading mostly among men who have sex with other men, health officials said, as has been the trend since the outbreak began in early May.

Monkeypox is primarily transmitted through skin-to-skin contact with someone who has a rash and pus-filled skin sores filled with the virus. In some cases, the rash has first appeared in the genital area and in or around the anus. Symptoms may include fever, pain, chills, fatigue, sore throat, swollen lymph nodes; and the skin lesions can be so intense that patients are prescribed pain medication.

Transmission likely accelerated at Pride events attended by gay and bisexual men in June. The month is a travel season for many gay and bisexual men, with Pride events taking place in major cities – across California, the US and abroad – every weekend in June. This weekend, the city of Long Beach hosts its Pride parade and celebrations. As reports of infection and exposure have increased, there is a call for vaccination and widespread frustration that vaccination is not possible.

“What we need most are warnings and public announcements from the County Department of Public Health — which we haven’t had,” said Michael Weinstein, president of the LA-based AIDS Healthcare Foundation. “We don’t take this seriously enough.”

Local health officials say their work is severely constrained by shortages of monkeypox vaccines, which they hope can soon be ramped up with promised federal supplies.

“Up until a few days ago, we only had 1,000 doses” of the Jynneos vaccine in LA County, said Barbara Ferrer, the county’s director of public health. “We are doing everything we can to ensure fair distribution of the current scarce supply of this vaccine.”

Ferrer said the initial allotment was nearly exhausted, but an additional 6,000 doses had recently arrived, which would allow for some expansion – but not nearly enough to meet demand. Ferrer said she expects vaccine supplies to be tight through at least August.

As of last week, the LA County Department of Health has restricted Jynneos vaccine doses to people who have been confirmed by officials to have had moderate- or high-risk exposure to a confirmed case of monkeypox or to people who have attended an event at which a high risk of exposure existed to someone with confirmed monkeypox through skin-to-skin or sexual contact.

Ferrer said her department will announce on Friday an expansion of eligibility for the vaccine to include people identified by a health care provider as at higher risk of monkeypox.

Ferrer also said the county health department was used social media to warn people about monkeypox. The Jynneos vaccine can help prevent monkeypox even after a person has been exposed to the virus. But Weinstein said he’d like to see a lot more messaging and prevention education, especially for the most vulnerable.

“I understand the concern about stigmatizing gay men, but our concern about not stigmatizing [these groups] Trump actually informing them, that’s a big problem,” Weinstein said. “We have to ask both the district and the federal government to get involved in society. The way we tackled HIV in this country was by engaging with communities.”

It can take a week or two for a person exposed to monkeypox to develop symptoms.

It’s possible for someone to develop a pus-filled skin sore without being aware of it, and it’s also possible for someone to develop such sores in their mouth, making it possible for them to breathe out the virus and other people in close contact infected, such as cuddling, kissing, or sex. Touching clothing or fabrics that have previously been in contact with the virus can also spread monkeypox. Officials emphasize that anyone can get monkeypox, including family members and friends who care for people recovering from infection.

The illness can last two to four weeks. The rash can spread all over the body and eventually crust over before the crusts fall off. Humans are not contagious when all scabs have fallen off.

Ferrer urged people with signs or symptoms of monkeypox to seek immediate medical attention, particularly those with skin bumps or rashes that could result from a monkeypox infection. Some people only have a handful of skin lesions to begin with, maybe even just one or two, but that’s enough to warrant a doctor’s visit, Ferrer said.

“If you have lesions, it’s important that no one else comes in contact with those lesions. So that means staying away from other people and avoiding close contact to keep those lesions covered,” Ferrer said.

Because the risk of monkeypox infection is higher, Ferrer said, “people attend large events where there’s going to be a lot of skin-to-skin contact, or maybe there’s going to be a lot of sexual activity with multiple partners or partners that you’re not well aware of, it really is.” prudent to be extraordinarily cautious in these situations as it can be difficult to perform a quick scan and determine if individuals have lesions.

“So for now, perhaps it’s best to take extra precautions when attending these events to really minimize skin contact where monkeypox can be transmitted,” Ferrer said.

Some in San Francisco also sounded the alarm about the city’s response to monkeypox and why so few vaccines are available for a growing number of at-risk individuals.

“Our country again appears pathetically ill-prepared to respond to a virus,” tweeted Assembly Member Matt Haney (D-San Francisco). “We desperately need the federal government to put in and distribute more cans … so we can get them out now.”

Adam Sukhija-Cohen, director of advocacy and policy research at the AIDS Healthcare Foundation, said his organization is uniquely equipped to reach out to gay and bisexual men for vaccine delivery, but so far LA County has not asked for their support.

Another 140,000 doses of vaccine will soon be made available nationwide, followed by 98,000 more doses later in July or August, Ferrer said. But that still means LA County can only expect a few thousand cans in the short term and still doesn’t have enough supplies to meet demand, Ferrer said.

“The hope is that there will be a lot more vaccine available for distribution sometime in late August,” Ferrer said. “We will have limited availability for most of the summer, so it will be geared towards those who are most at risk.”

The strain of monkeypox in the global outbreak — known as the West African strain — is rarely fatal. But there are some people who can experience significant complications such as: B. People with weakened immune systems and people who have had a history of eczema. Rare complications can include lesions in the eye that endanger vision.

While some in the LGBTQ community are cautiously comparing monkeypox to the onset of the HIV/AIDS epidemic, Stuart Burstin, the AIDS Healthcare Foundation’s interim national director of infectious diseases, said there is one big difference: the visible lesions.

“You can see it, you can prevent it,” Burstin said. “Right now we have a window of opportunity. … It’s important to jump on, but trying to incite more fear and trepidation isn’t helpful; Prevention is key.”

Scientists struggle to understand the competition between Omicron and Delta