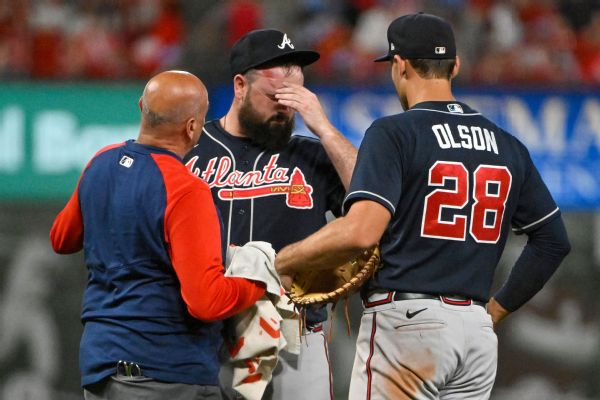 ST. LOUIS — Atlanta Braves helper Jackson Stephens was hit in the side of the head by a line drive Friday night and taken to a hospital for tests.

Stephens went off the field in the ninth inning against the St. Louis Cardinals and appeared unhurt.

“He’s conscious and everything, but he has to go to the hospital and do some tests,” said Braves manager Brian Snitker after his team’s 11-4 win. “It’s always scary when you see someone getting hit in the head or face. It’s probably the most disgusting thing you can experience in a game.”

With an out and runners in second and third place, Brendan Donovan missed a line drive that caught Stephens in the right temple. The ball rebounded into flat right field for an RBI single.

Stephens never went down but was immediately checked by Atlanta’s training staff. After a moment, he left the field under his own power to loud applause from the remaining crowd at Busch Stadium.

Tyler Matzek replaced Stephens and got the last two outs.

Netflix with ads could cost between $7 and $9 per month

Pirates win 1st MLB draft lottery, right to pick No. 1; Nats get No. 2

Looking for a thrilling activity out on the water? Try wakesurfing!