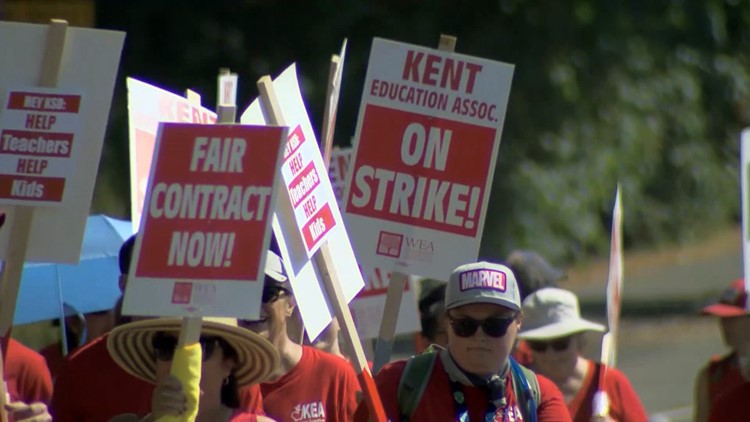 Back-to-school season is here, but the return to the classroom is uncertain as educators in western Washington fight for higher wages and more.

SEATTLE — Back-to-school season is here, but the return to the classroom has either been or may have been delayed as educators in western Washington fight for higher wages and more.

A crucial vote taking place this weekend could affect thousands of families in the state’s largest school district as the union representing educators at Seattle Public Schools (SPS) votes to authorize a potential strike.

In a letter to parents on Friday night, SPS said it was already preparing if classes on September 7 – the first day of school – were delayed due to a teachers’ strike.

SPS issued a statement saying the district offered legal arbitration to reach a contractual agreement before September 7, but the offer was rejected by the Seattle Education Association (SEA).

SEA members will vote throughout the weekend and have until 9am on Tuesday to cast their vote to authorize a strike. The result of the vote will be announced on Tuesday.

Teachers in Kent, Washington state’s fourth-largest school district, have been on strike since August 25, delaying the first week of school.

The Kent School District has canceled the first day of school several times during the strike, where the Kent Education Association is negotiating higher wages, lower class sizes and more manageable caseloads.

Negotiations between the district and the teachers’ union have continued, but little progress has been made by the two parties.

The district called the strike illegal and said the union was violating its contract.

After failing to reach a new agreement with the district, the Port Angeles Education Association called for a strike to begin Tuesday if a contract is not agreed on time.

However, educators will start the school year as planned on Thursday as negotiations between the two parties continue into the weekend.

The union said smaller class sizes at all levels are its top priority.

Eatonville school district teachers plan to go on strike next week if they cannot reach a contractual agreement with the district.

Members of the Eatonville Education Association (EEA), the union representing teachers, voted Tuesday to authorize a strike on September 7, the first day of classes.

The union said it approached the district in the spring to agree collective bargaining. The district made its first proposal to teachers in July, in which the union said the educators’ proposals were “respectfully rejected.”

Talks continued over four hearing dates in August and an additional session on Thursday. A union spokesman said another hearing was set for Tuesday, but if there was no movement then teachers would picket the line.

North Thurston Public Schools and the North Thurston Education Association reached a tentative collective bargaining agreement for the 2022-23 and 2023-24 school years on Monday.

The ratification of the agreement should be completed by the end of September. Classes are scheduled to start.

The tentative agreement comes after teachers in North Thurston went on picket and increased wages in August over workload.

https://www.king5.com/article/news/education/back-to-school-teacher-strikes-contract-negotiations/281-13f0ebf9-a1b4-4b61-b085-19cd49e09ce8 Back to school delayed as teachers negotiate wages in Washington

Survivor of Holocaust, Munich attack heads back to Germany

Column: Bass or Caruso? Look back at recent L.A. mayors