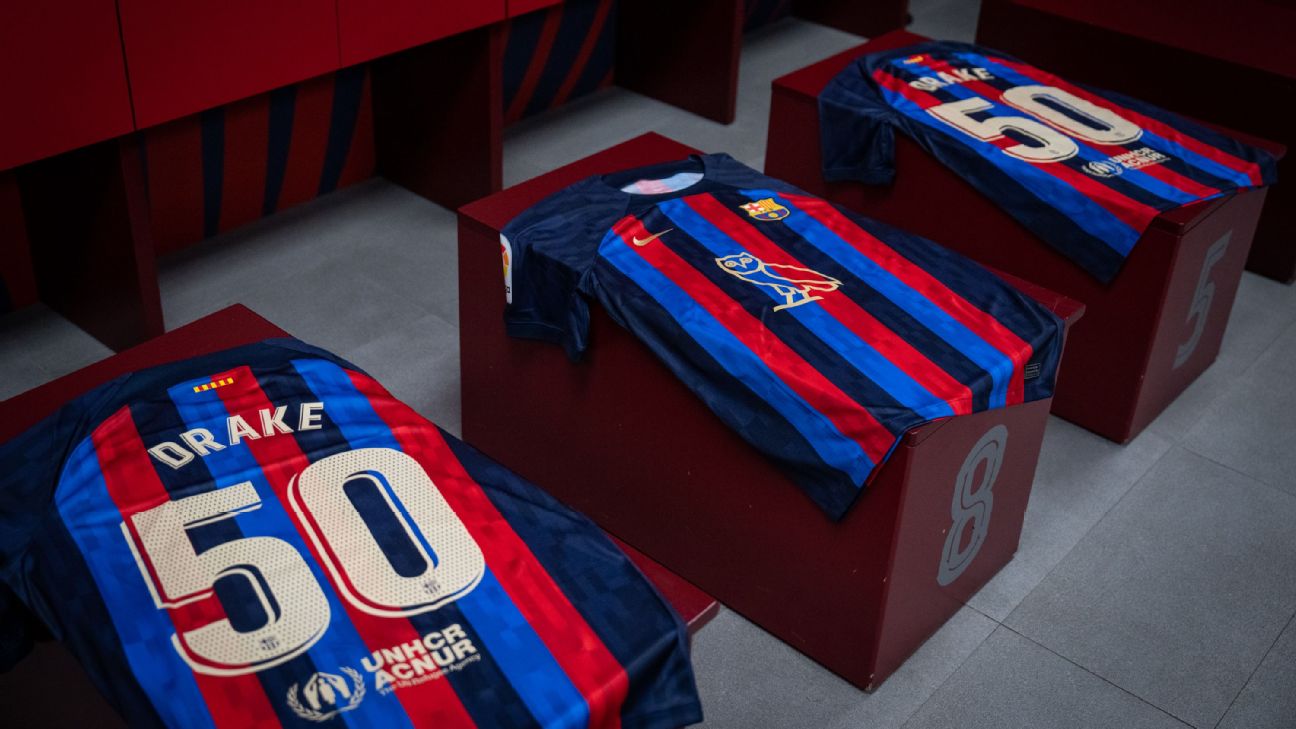 Barcelona will wear the logo of Canadian rapper and singer Drake on the front of their shirt in LaLiga on Sunday El Classico at Real Madrid to celebrate the fact that he is the first artist to hit 50 billion Spotify streams.

– Stream Real Madrid vs. Barcelona live on ESPN+ (Sun 16 Oct 10:15 U.S. only)
– Get ready for El Clasico with classic matches, analysis on ESPN+

The club welcomed Spotify on board as a main sponsor in March and have since promoted a number of artists via billboards at the Camp Nou, although Drake is the first to make it onto the actual shirt itself.

Once famous for their ideological aversion to shirt sponsors, Barca will now sport Drake’s logo on the front of their kits for a limited time – which, while celebrating the hip-hop star’s streaming successes, also gives the Catalan giants an odd touch of Sheffield Wednesdays old coat of arms.

Drake’s owl symbol will appear on the biggest stage in Spanish football, with Barcelona confirming that the limited-edition shirt will be worn for the first time against Real Madrid at the Bernabeu El Classico On Sunday.

“It doesn’t feel real but it is,” the 35-year-old wrote on Instagram.

Drake has previously sported Barca’s colors in public when a photo of him in the shirt was shared on his social media accounts last summer. In fact, the picture caused Dutch winger Memphis Depay – himself a budding hip-hop artist – to have a minor meltdown from the excitement.

Of course, this isn’t the first time a headline musician has collaborated with a football club, with many pop, rock and hip-hop stars having their trademarks on shirts in the past.

The Rolling Stones have their own line of Paris Saint-Germain special merchandise that includes football shirts as well as bizarre offerings like sneakers, moped helmets and skateboards.

OFFICIAL: PSG have launched their ‘unique collaboration’ with the Rolling Stones. #PSGNoFilter pic.twitter.com/Dh9mySO5RP

Get up this morning, smile with the rising sun.

Introducing our new 21-22 third kit, inspired by our collective love for @Bob Marley and his three little birds. pic.twitter.com/YiPUS7AR19

Shirt sales will raise funds to bring football and music to asylum seekers in Ireland 👏 pic.twitter.com/gwC0GowK5z

Seattle Sounders FC created an appropriately psychedelic salute to guitar hero Jimi Hendrix, one of the city’s most famous sons, with their drab purple 2021 away kit.

Iron Maiden bassist Steve Harris is known as a huge West Ham United fan and regularly plays live shows with a signature guitar bearing the crest of his beloved club.

He has also worked with the Hammers to make a pair of limited edition West Ham x Iron Maiden replica jerseys and special edition training lines.

Ipswich Town has teamed up with local celebrity fan Ed Sheeran on a number of occasions, including a couple of back-to-back home kits (all featuring the singer-songwriter’s mathematical symbols) and this season’s incredibly popular ‘Blackout’ kit.

A crystal ball forecast for high school sports in 2023

No one feels good about where Buccaneers are at