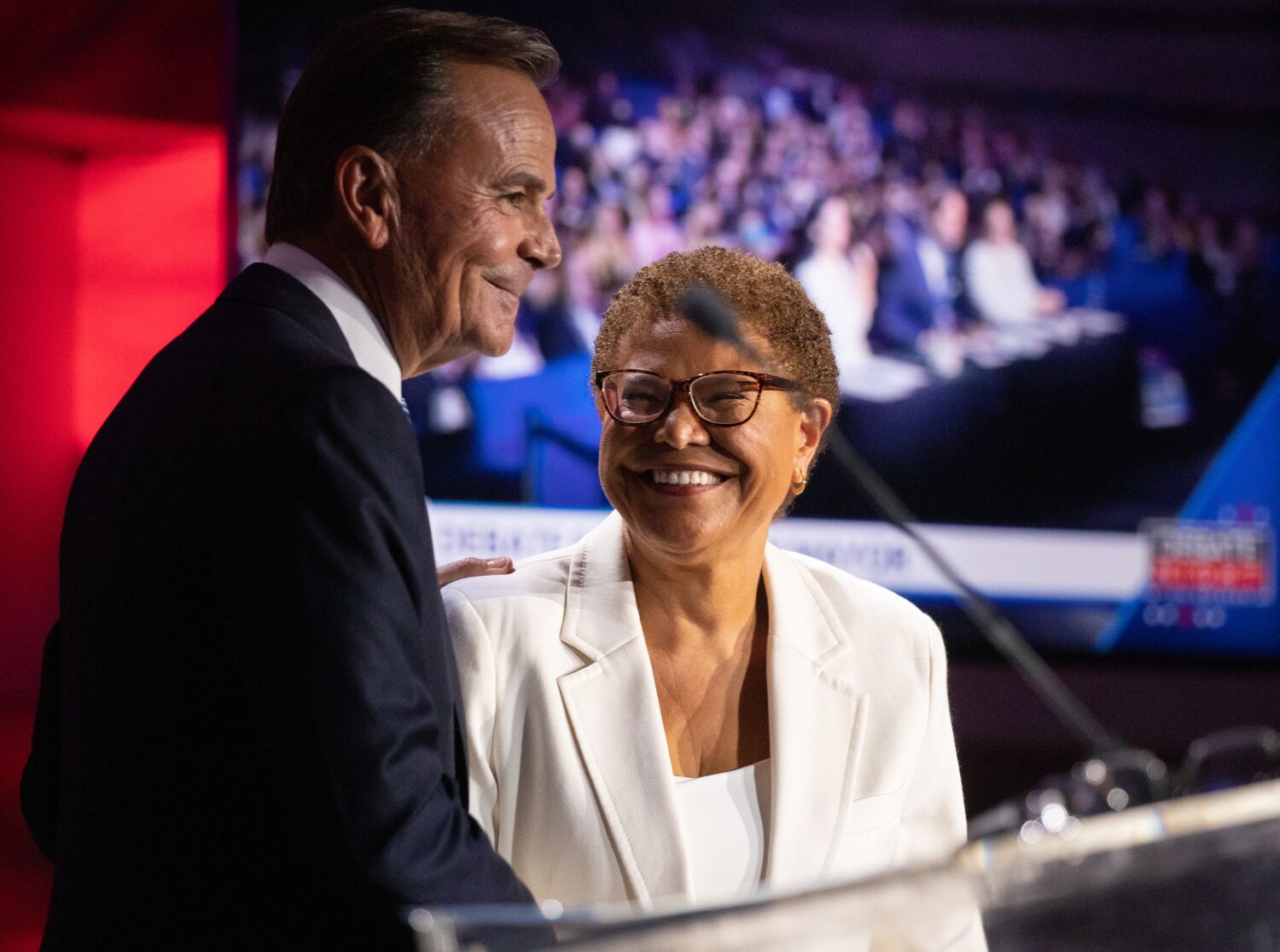 US Rep. Karen Bass and real estate developer Rick Caruso slammed each other on charges of misconduct and dishonesty, the latest rhetorical escalation in the once relatively posh campaign for Los Angeles mayoralty, during an hour-long debate Wednesday.

The veteran Washington lawmaker pilloried the businessman for not having contact with the predominantly Democratic LA because of his previous Republican registration and financial contributions to anti-abortion politicians.

Caruso, in turn, portrayed Bass as a hidden member of a failed political class that has failed to curb the city’s homelessness and crime — the two problems voters say are their biggest concerns.

The acrimonious exchange during the debate, which was broadcast live from the Skirball Cultural Center at the Sepulveda Pass, built on the coarser tone the campaign had taken on in recent weeks. This marked a marked departure from previous proclamations of mutual respect between the two would-be mayors, including a moment three years ago when the duo sat side by side as dignitaries at a USC graduation.

Bass has sought to consolidate a lead she took in the June primary, beating Caruso by 7 percentage points and increasing it to 12 points in polls conducted over the summer. Caruso is still hoping to convince nearly a quarter of undecided voters, a group that could postpone the race before voting closes on Nov. 8.

Much of Wednesday’s disagreement centered on USC, the university that both candidates attended and which has been the focus of scandals in recent years.

Bass attacked Caruso for his time as chairman of the university’s board of trustees. She echoed previous reports in The Times of how Caruso backed out on a promise to release an account of an investigation into a gynecologist accused of sexual misconduct.

“The gynecologist’s victims, literally hundreds of students at USC, have asked you to release the report,” Bass said. “As chairman of the board of trustees, he committed to doing an investigation, making a report, and then he decided he wouldn’t release it when the victims asked for it to be released.”

Caruso helped USC secure $1.1 billion legal settlements with former patients of gynecologist George Tyndall and overhauled the university’s governance and governance structure. But in recent years he has backed down on the report’s release, saying USC’s attorneys only gave the trustees verbal instructions and that there was no report for release.

Caruso said his opponent’s attack was intended to distract from her own wrongdoing when she received a nearly $100,000 scholarship “without an application” to receive a master’s degree from the USC School of Social Work.

“She got a $95,000 scholarship. She failed to report it to … the paperwork where it needed to be reported,” Caruso said. “She graduated, took fewer classes than her classmates, and then worked for the dean [of the School of Social Work] to make legislation and get it through Congress so taxpayer money goes back to the same school.”

Bass said she worked hard to get her degree. “I don’t think it was a bad judgment at all,” she told Caruso. “I’ve spent the last three decades working for the most vulnerable in our country, children in the child welfare system.”

The exchange ended sharply when Caruso asked if Bass was “claiming the prosecutors are lying” when he mentioned them in a parallel corruption investigation involving now-suspended Los Angeles City Councilman Mark Ridley-Thomas. “No,” Bass replied, “I pretend you are.”

Ridley-Thomas was accused of providing contracts to USC in exchange for a scholarship and a job for his son. He has pleaded not guilty. His trial is scheduled for November 15.

Former USC Dean Marilyn Flynn, who provided Bass with the scholarship, pleaded guilty Monday to bribery in the Ridley-Thomas case. The U.S. Attorney’s Office told the Times earlier this month that Bass was “not a target or subject of our office’s investigations at this time.”

Although the Los Angeles Mayor’s race is technically bipartisan, the issue of party affiliation has been brought to the fore by Bass and her campaign.

In response to a question, the congresswoman said Caruso had been a Republican for decades, then an Independent, then a Republican again. He registered as a Democrat just prior to the start of the current campaign.

“That’s the problem,” Bass said. “You’re just pacing like that.”

Bass tried to make that distinction from the start. When asked about the biggest difference between her and Caruso, she described herself as a “lifelong pro-choice Democrat.”

Caruso acknowledged that he returned to the Republican Party in 2016 to support former Ohio Gov. John Kasich, whom he saw as the only viable Republican who could stop Donald Trump from winning the party’s presidential nomination.

“I never supported Trump. I never gave him a dime,” Caruso said. He also noted that he had contributed to many Democrats, including Bass himself. He said the congresswoman had unfairly compared him to Trump in the past.

“When you asked me for donations, I supported you,” Caruso said. “And did you think I was Donald Trump when I wrote you a check?”

Caruso also slapped Bass earlier this month over an incident when burglars broke into her home in Baldwin Vista and stole two .38 caliber revolvers. He asked a series of questions, wondering if the guns were being kept safe, Bass said

“There are now two guns on the street. And we have horrific gun violence in the city of Los Angeles,” Caruso said, prompting further responses from Bass on the incident.

Bass countered that she was stunned that Caruso would blame her when she was a crime victim and had previously called him to express her concerns about a burglary at the upmarket Grove shopping center he owns.

“I think that’s an act of desperation, Rick,” Bass said.

The candidates also addressed political issues that matter most to voters.

On public safety, Bass reiterated her intention to bring the LAPD back to its previously approved staffing level of 9,700 officers and said she will get more police on the streets by getting them out of their desk jobs.

Caruso has called for a larger increase to 11,000 officers, which would be an all-time high for the force. That would be an expensive and difficult task given the force has dwindled to just 9,200 officers, down from 800 officers in recent years.

On homelessness, Caruso and Bass reiterated their previous plans – theirs to create 15,000 housing units and his to provide 30,000 units for the homeless within 300 days of taking office.

She would build new shelters to house about 1,000 people, expand use of housing vouchers, rent and buy motels and hotels, and try other approaches. The first-year price tag would be $292 million, including construction and shelter operating costs.

Caruso’s plan would cost an estimated $843 million in the first year to build or acquire the homes and have them ready for occupancy. He declined to estimate the operating costs of housing 30,000 people, but an earlier Times analysis of city documents found that it would cost about $660 million a year, or about $22,000 per person.

Caruso said he would use his knowledge as a developer to streamline the city’s bureaucracy and make it easier to build new homes. He said he will focus on both temporary and permanent structures after declaring a state of emergency for homelessness.

In light of the Supreme Court’s decision to ban abortion, candidates were asked if this should be an issue in the campaign.

Bass said it should. Even though the city is not directly involved in managing healthcare, the issue is “a matter of values.”

Caruso – whose previous anti-abortion donations were frequently attacked during the race – insisted, “I’m pro-choice, I always have been.”

Ride Share: Uber rolls out text-to-911 safety feature on app for users across US

Real Housewives of Beverly Hills (RHOBH): Kim Richards Admits Why She Is Not Friends With Brandi Glanville-‘I Felt A Little Upset’