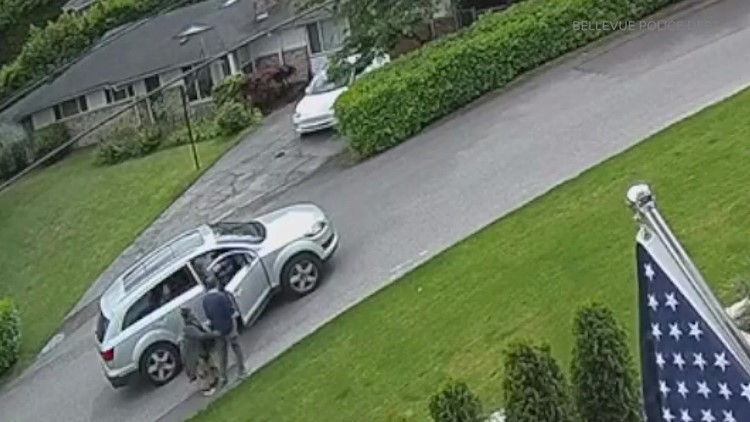 BELLEVUE, Wash. — A crime reported in California has made its way to western Washington. So far, according to the police, there have been six cases of thieves stealing jewelry from pedestrians.

“The variations in the vehicles, slight variations in the descriptions of the suspects, the different ages of the children who were with them tell us this was a group and it’s an organized, well-rehearsed tactic,” Bellevue Police Capt. Joe said Nault.

The suspects are believed to be part of an organized crime ring operating along the west coast.

Bellevue Police say the crime happens as suspects create a chaotic interaction. The suspects, described as a man, woman and child, pull up in a car and strike up a conversation with a pedestrian. The conversation often involves a language barrier or a heavy accent that is difficult to understand. The suspects will use hand gestures and approach the victim. In some cases, they give the victim fake jewelry or money. All of this happens while they make physical contact and take away a person’s valuables.

“Two of the cases involved thousands of dollars worth of Rolex watches. The last one we had is very sad because it was a $6,000 necklace, but apart from the monetary value, the necklace was given to the women by her recently deceased husband,” Nault said.

Nault said of the six cases reported this year, four have been in Bellevue, one in Kirkland and one on the Kitsap Peninsula. In four of the cases, the victims are in their 70s and speak no English, adding to the confusion.

“A lot of things happen at once, kind of sensory overload, and the next thing you know, they’ve had their necklace or watch taken,” Nault said.

The crime is difficult to trace as police believe the thieves use different rental cars and are often out and about. Nault said BPD heard similar reports of this crime in San Diego.

“If you decide to wear jewelry or nice things, just think about the distance you have from that person, what is actually happening, and don’t be afraid to keep your distance by waking up or some distance from them hold person Don’t be afraid to call 911,” Nault said.

Seattle’s Ballard Bridge reopens after closure due to crash

Judge to Eastman: Give Jan. 6 committee more emails, including the one presenting evidence of a likely crime