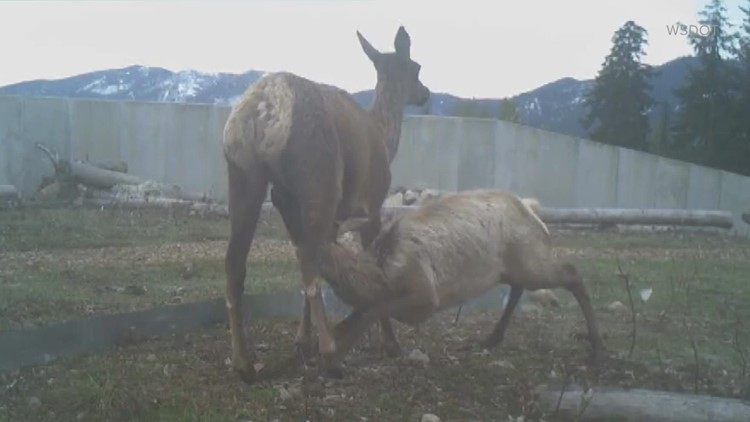 WSDOT released new video this week showing a herd of 55 moose, a rare sighting of a black bear crossing, and a nursing moose calf.

SNOQUALMIE PASS, Washington — The wildlife crossing along I-90 has seen heavy traffic this summer.

“It’s really great to see wildlife working with it. We captured several species of wildlife, including bobcats, coyotes, elk and deer,” said Meagan Lott, communications manager for the Washington Department of Transportation.

WSDOT Snoqualmie Passport released a new video This week features a herd of 55 moose, a rare sighting of a black bear crossing and a suckling moose calf.

Conservation Northwest has worked with WSDOT on wildlife connectivity for years and said I-90 is a huge obstacle.

“There’s so much work that goes into the front end, and then you see these videos that WSDOT just showed and it shows how important it is to invest in these projects,” Wolf-Buck said.

More will soon be added as part of WSDOT’s nearly $1 billion 15-mile improvement project on I-90 between Hyak and Easton.

A second crossing is planned near Easton, as well as an underpass along Hudson Creek.

“These wildlife hybrids have been strategically placed in areas where we know natural migration patterns exist,” Lott said.

These are expected to be completed over the next two years, plus 15 other wildlife structures.

These crossings are set up after hundreds of car accidents involving wildlife.

“When you’re driving 70 miles an hour and run over a deer. It’s not going to end well,” Lott said.

The state recently invested more money in a similar project along Highway 97, which Wolf-Buck says has reduced collisions by 91% since August 2020.

Conservation Northwest is hoping for more state and federal funding.

“We have big dreams for the I-5 corridor. If you’ve ever driven through Olympia to the coast, you see all these beautiful trees and imagine wildlife trying to cross those highways,” Wolf-Buck said.

WSDOT has seen 4,000 species of wildlife with its thermal imaging cameras since monitoring the first crossing in 2015.

“Their habitat is changing with climate change, and they need to be able to move to the area that best suits their needs,” Wolf-Buck said.

Suspect in custody after being barricaded in Sammamish home