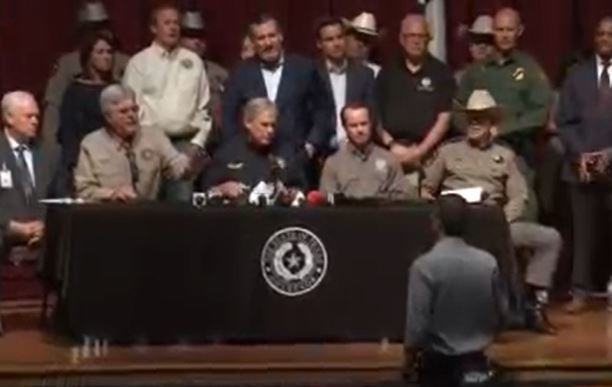 O’Rourke walked onstage after Abbott’s opening remarks and was able to say, “They’re not doing anything.”

Abbott, political leaders, to provide a briefing on the Texas school shooting on Wednesday


O’Rourke was heard saying the shooting was “perfectly predictable.”

O’Rourke was escorted out of the venue by police. Outside, he spoke to reporters.

“There are no words anyone can scream to come here and do anything to mend these broken hearts,” Abbott said after the exchange.

At least 19 students and two adults died in the shooting at Robb Primary School in Uvalde. Officials have not yet officially released the victims’ names, but families are coming forward to identify their loved ones.

The shooting happened just two days before the last day of the school year, according to the Uvalde CISD calendar.

“Put aside personal plans for just this one moment…think of someone other than ourselves. Think of the people who are hurting,” Abbott said, voice raised.

“We will have plenty of time to discuss and analyze what happened yesterday and do everything in our power to hopefully prevent it from happening again. Now is the time for people in this country, in this state, around the world to focus on families,” Patrick said.

O’Rourke is running against Abbott for governor in November.

Uvalde Gunman Posted About Shooting School on Facebook Before Attack