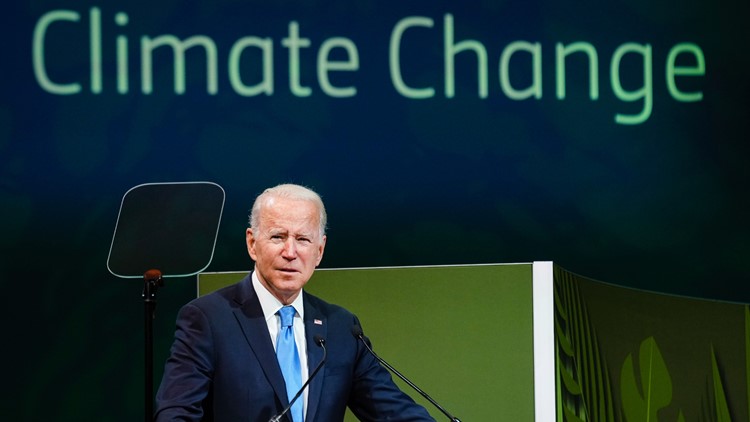 President Biden will present the latest efforts on climate change with a visit to a former coal-fired power plant being converted to offshore wind power.

WASHINGTON — President Joe Biden is set to announce new actions he can take on climate change himself, just days after an influential Democratic senator dashed hopes of a sweeping package of new environmental programs in legislation this year.

Biden will unveil the latest effort Wednesday during a visit to a former coal-fired power plant in Somerset, Massachusetts, which is being converted to offshore wind power. It is the embodiment of the clean energy transition that Biden aspires to but has struggled to make in the first 18 months of his presidency.

Executive action on Wednesday includes new initiatives to strengthen the domestic offshore wind industry, as well as efforts to help communities cope with rising temperatures through programs managed by the Federal Emergency Management Agency and the Department of Health and Human Services, according to a White House official will.

But the measures Biden is announcing on Wednesday will not include a national declaration of emergency to deal with the climate crisis — something campaigners and Democratic lawmakers have been seeking after Sen. Joe Manchin, DW.Va., called off talks on a legislative package last week .

White House officials said the option is still under review. Press secretary Karine Jean-Pierre declined Tuesday to outline a timeline for a decision, other than saying no such order would be issued this week.

Gina McCarthy, Biden’s climate adviser, said the president “doesn’t shy away from treating climate as an emergency.” She told CNN on Wednesday that he would announce a series of measures to address the threat “in the next few weeks.”

Sen. Ed Markey, D-Mass., said he was “confident that the President ultimately stands ready to do whatever it takes to resolve this crisis.”

“I think he made that clear in his statement last Friday, and I think coming to Massachusetts is another articulation of that goal,” Markey told reporters Tuesday.

Biden has come under significant pressure to issue an emergency climate declaration that would allow him to redirect federal funds to bolster renewable energy programs that would help accelerate the transition away from fossil fuels.

Jean-Pierre declined to explain the internal reasoning behind such a statement, which would be similar to that of Biden’s Republican predecessor Donald Trump, who had declared a national emergency to build a wall on the southern border, as lawmakers refused to to provide money for it effort.

Manchin has said he will only approve a bill for now that will prop up subsidies to help people get insurance under the Health Care Act of 2010 and allow Medicare to negotiate prescription drug prices, ultimately lowering the cost of medicines for the consumers will decrease.

The White House has indicated that it wants Congress to make that deal, and the President will address the climate issue himself.

“I will use every power I have as President to continue to fulfill my promise to deal with global warming,” Biden told reporters over the weekend in Jeddah, Saudi Arabia, after talks between Schumer and Manchin were derailed.

Biden on Wednesday will visit the former Brayton Point power plant, which closed in 2017 after burning coal for more than five decades. The plant is now becoming a production site for offshore wind energy.

Discord voice chats are finally coming to Xbox consoles, but it's complicated

SEPTA Rape Investigation: Person of interest in custody after rape at Snyder station in South Philadelphia