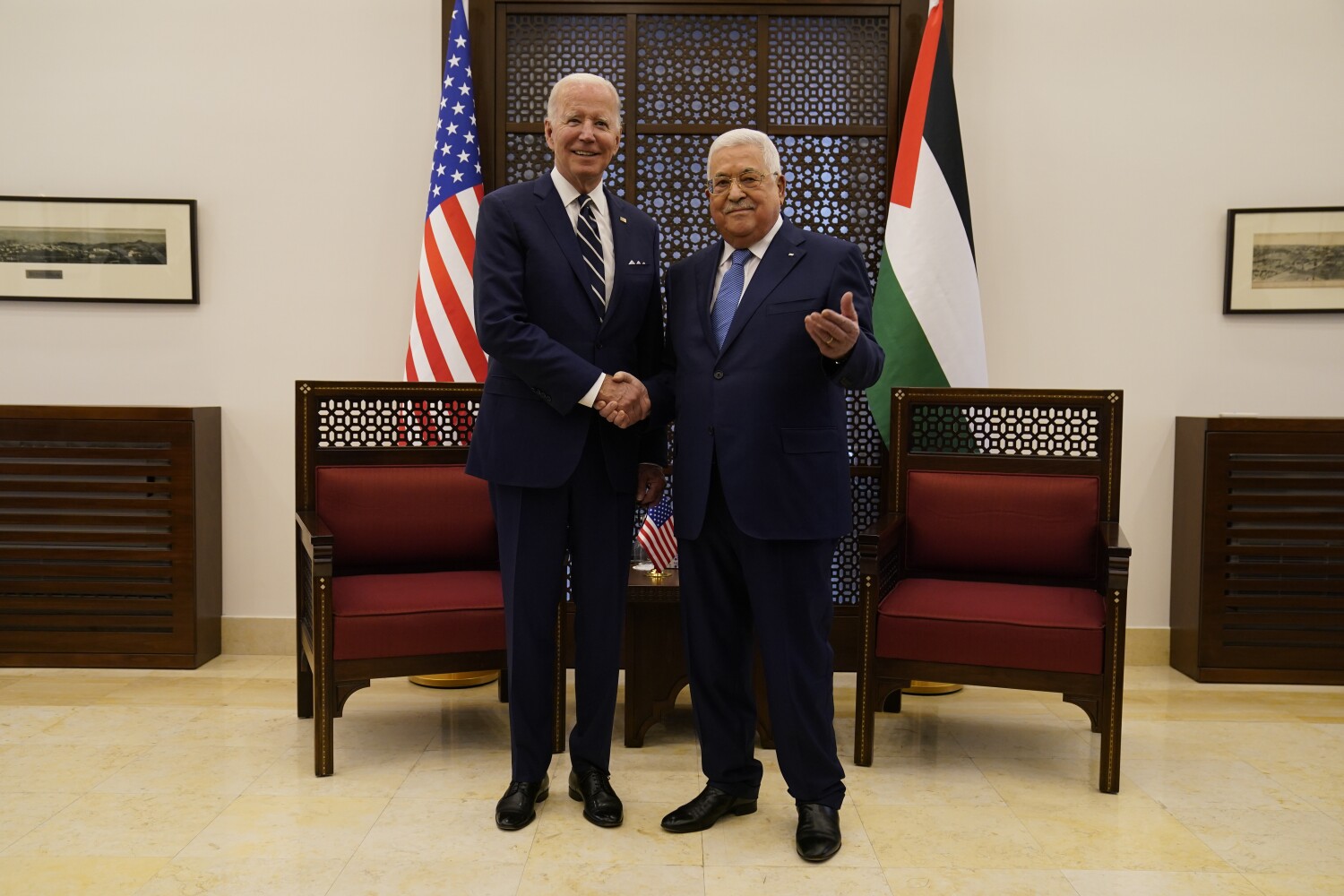 President Biden on Friday endorsed an independent Palestinian state, while acknowledging that such a historic development is “far away” and acknowledging the desperation of the Palestinian people, who have long been frustrated in their fight for equal rights.

“Even though the ground is not right now to resume negotiations, the United States and my administration will not give up on bringing the Palestinians and the Israelis, both sides, closer together,” Biden said in a joint appearance with the Palestinian president Mahmoud Abbas in Bethlehem.

“I know that the goal of the two states seems so far off, while humiliations like restrictions on movement and travel or daily concerns about the safety of your children are real and immediate,” Biden added. “The Palestinian people are suffering now. You can just feel it. your sadness and frustration. In the United States we can feel it.”

Biden’s comments were unlikely to ease Palestinian frustration with US policy. They are particularly upset that Biden has not reversed Trump-era actions, including the former president’s declaration that Jerusalem is the capital of Israel. That was a controversial decision because the Palestinians claim part of the disputed holy city as the capital of an eventual state. They are also angry that Israeli settlers are constantly devouring land that would hamper their ability to govern an ultimately independent nation.

“Peace begins with Palestine and Jerusalem,” said Abbas. After decades of Israeli control, the Palestinian leader said, “Isn’t it time for this occupation to end and for our steadfast people to regain their freedom and independence?”

Biden’s behind-closed-doors meeting with Abbas at a government building in Bethlehem was attended by numerous other Palestinian officials, including Hussein Sheikh, a senior member of the Palestine Liberation Organization who is often cited as the successor to the aging Abbas.

The four hours Biden spent in Bethlehem and East Jerusalem were the only allusion to the Palestinians in the president’s itinerary during a four-day trip to the Middle East that included meetings with leaders of Israel, Saudi Arabia and other Gulf states.

As he entered Bethlehem, Biden encountered large signs that read, “Mr. President, this is apartheid” set up by an Israeli human rights group. Portraits of the slain Palestinian-American journalist Shireen Abu Akleh also appeared on the walls of some buildings along the roads to Bethlehem.

Journalists attending a joint appearance by Biden and Abbas also took a symbolic step to raise awareness of the killing by leaving an empty chair in the press area.

She was most likely killed by Israeli forces while covering an Israeli military attack in the West Bank city of Jenin on May 11. Her death and the US reluctance to blame Israel have infuriated the Palestinians.

Biden, speaking with Abbas, said the US government “will continue to insist on full and transparent accountability for their deaths.”

“Her death is a tremendous loss to the essential work of sharing the history of the Palestinian people with the world,” he added.

Expectations were low even before Biden’s arrival. The Biden administration has resumed diplomatic ties with the Palestinians and restored financial aid, both of which had been cut off by former President Trump. But the White House has not reversed other Trump actions, such as reopening the US consulate in East Jerusalem, which had served the Palestinians and was shut down by Trump.

National Security Adviser Jake Sullivan said Friday on Air Force One en route to Saudi Arabia with reporters that Biden and Abbas had discussed the consulate and said US officials would continue to engage with Palestinians and Israelis. But in 18 months there has been no movement.

“I think we expect too much of [Biden] in relation to Palestine,” Palestinian writer Mariam Barghouti said on Twitter on Friday. “Older than the State of Israel, its ideology dates from the era of colonial conquest. I don’t think that will change at this point.”

In Bethlehem, Biden also toured the Church of the Nativity with several clergymen explaining the ornate mosaics and Byzantine architecture. Christian tradition holds that a small grotto under the center of the ancient church marks the birthplace of Jesus.

The White House said Biden’s visit to the church was meant to signal support for Christians across the region who have faced attacks and displacement. Palestinians are among the last indigenous Christians to remain in the Holy Land, but many have immigrated to the United States, Latin America and other countries.

Earlier Friday, Biden toured Augusta Victoria Hospital, part of the East Jerusalem Hospital Network, which serves as the “backbone” of healthcare for the Palestinians, as Biden put it. His US funding was cut by Trump, and Biden pledged $100 million in new money.

A woman in the audience, who identified herself as a nurse, said to Biden, “Thank you for your support, but we need more justice, we need more dignity.”

Bierman reported from Jerusalem and Wilkinson from Washington.

Amazon's Fire TV Stick 4K drops to $30, plus the rest of the week's best tech deals