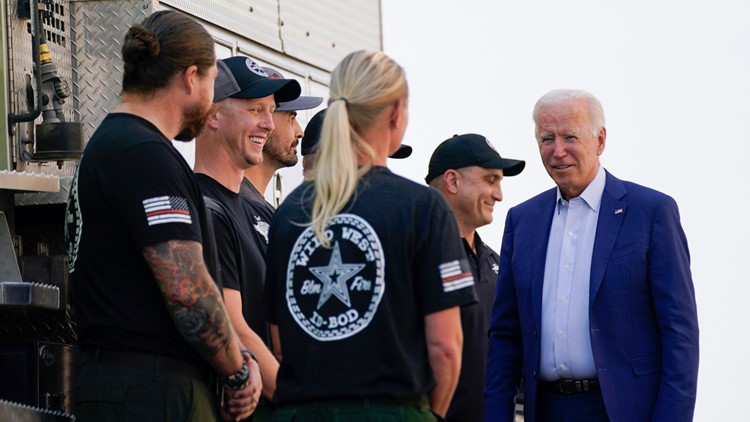 The move, announced on Tuesday, will affect more than 16,000 firefighters and comes as much of the West braces for a difficult wildfire season.

WASHINGTON — President Joe Biden has agreed to give federal firefighters a hefty pay rise for the next two fiscal years, a move that will affect more than 16,000 firefighters and prepare so many in the West for a difficult wildfire season.

Pay increases for federal firefighters were included in last year’s $1 trillion infrastructure bill but were held up when federal agencies examined recruiting and retention data to decide where to deliver them.

The White House said the move, announced Tuesday, is intended to “put federal agencies on track to continue working with stakeholders on an updated, competitive and equitable wage structure, along with a support system that will address the many challenges that have plagued our wildlands.” firefighters have for decades.”

The legislation stipulated that the $600 million in the infrastructure bill to increase wages for wilderness firefighters should go to all those firefighters provided they are “located in a specific geographic area where it is difficult to find one.” Recruit or retain a federal firefighter for the wilderness”.

In the end, the Biden administration decided on a pay rise for all federal forest firefighters over the next two years, according to a senior administration official who spoke on condition of anonymity before the official announcement. The official said the infrastructure bill provides enough money to provide the raises, but the administration is trying to work with Congress to find a long-term solution to firefighter salaries.

“I will do everything in my power, including working with Congress, to secure long-term funding to ensure these heroes continue to earn the paychecks — and dignity — they deserve,” Biden said in a statement.

The Infrastructure Act also authorized agencies to increase the base salary of federal wilderness firefighters by $20,000 per year, or 50% of their current base salary, whichever is lower, through 2023. Firefighters will receive back pay for the pay increases through October 2021.

The National Federation of Federal Employees union, which represents the majority of federal wilderness firefighters, had urged the Biden administration to interpret the law as broadly as possible, as firefighters across the country were struggling to make ends meet.

“This is incredibly good news for federal firefighters across the country,” said Randy Erwin, president of the union. “This year has seen a serious recruitment and retention problem for forest firefighters at federal agencies.”

Forest Service chief Randy Moore told a Senate subcommittee last month that his agency’s staffing rate is 90% overall, but only 50% in some areas, including Oregon, Washington state and California.

Senator Martin Heinrich, DN.M., was among a group of lawmakers who had urged the government to solve the salary problem, fearing it would further exacerbate staff shortages as the West enters the hot summer months. Heinrich called the two-year salary fix “progress,” but said more needs to be done. New Mexico experienced the largest wildfire on record in the state this year.

“These men and women are battling historic fires in NM and are on the front lines of the climate crisis across the West,” Heinrich said in a Twitter message. “It is admirable, arduous work and hard on their families.”

The issue of wilderness firefighter recruitment, retention and low pay has been on Biden’s radar since the beginning of his tenure.

Last June, before the infrastructure bill passed, the Democratic president signed an executive order temporarily increasing salaries for federal firefighters to ensure no one was making less than $15 an hour.

Biden said he was dismayed after learning that starting salaries for federal firefighters are significantly lower than many local and state fire departments. Pay for new federal firefighters had typically started at $11 to $14 an hour, and they were eligible for overtime.

Ashton Kutcher says he battled vasculitis, a rare disease that left him unable to see, hear or walk: ‘Lucky to be alive’