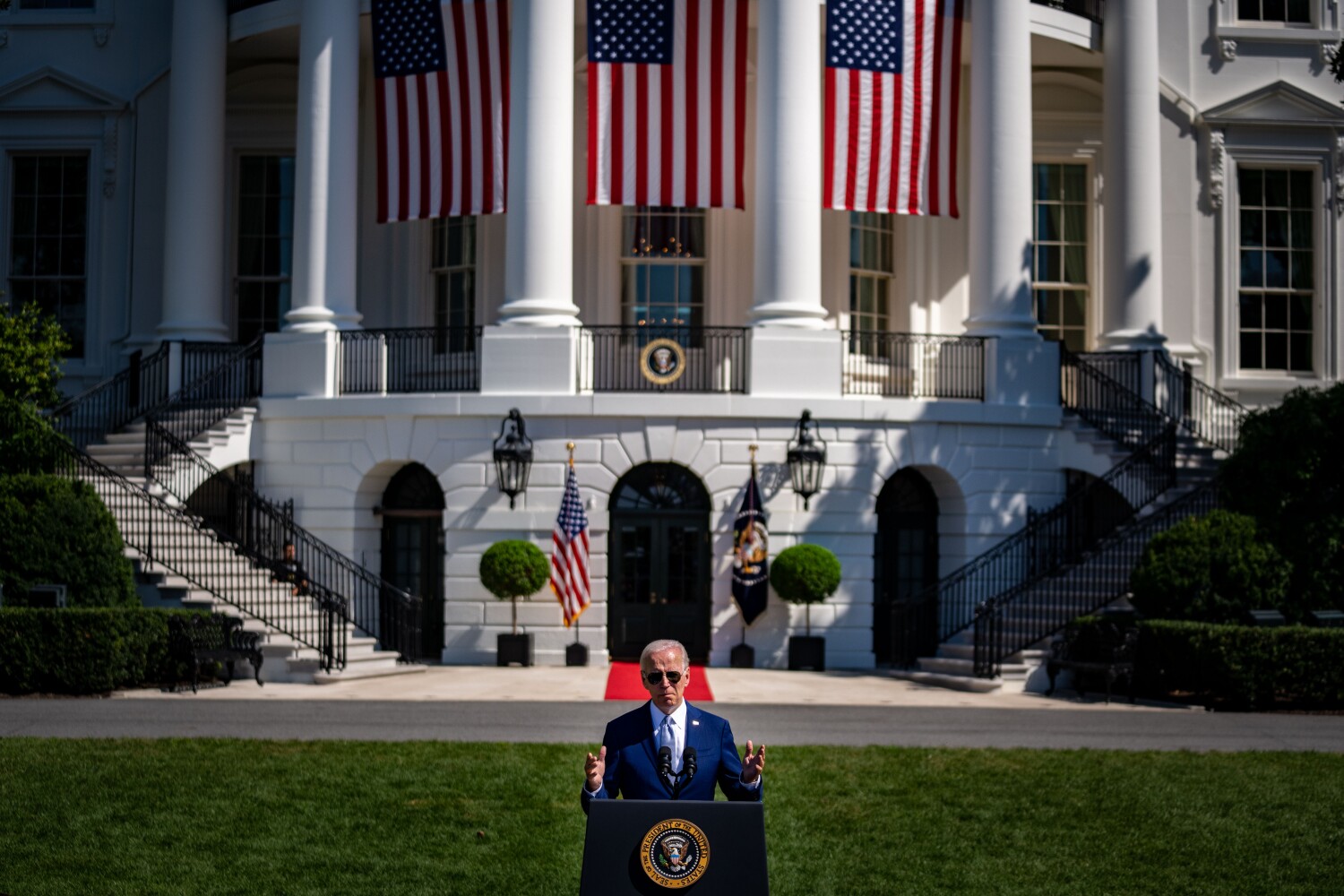 President Biden signed a sweeping competition law Tuesday that will channel $52.7 billion into domestic semiconductor research and development to make the U.S. less dependent on China and other Asian nations.

Industry CEOs attending the White House signing ceremony announced new investments of around $50 billion, adding significance to the first of several victories the administration plans to celebrate this week. Micron Technology Inc. leads the charge with a $40 billion investment in memory chip manufacturing, a move that the White House said would create 40,000 new jobs.

Speaking before signing the law on the South Lawn of the White House, Biden called the bill “a once-in-a-lifetime investment in America itself” that comes at a moment of global upheaval and amid a still-unresolved struggle between the world’s democracies and autocracies.

“We know there are those … who seek division rather than strength and unity who tear down rather than build,” Biden said. “Today is Builders Day. Today America delivers.”

Two days after a second period of isolation due to his rebound case of COVID-19, Biden battled a persistent cough as he made his remarks, pausing for several sips of water between triumphant declarations. “We are better positioned than any other nation in the world to win the competition for the 21st century,” he said.

After a lengthy legislative hiatus, Biden is suddenly riding a wave of momentum and is poised to sign the accession protocols paving the way for Finland and Sweden to join NATO later Tuesday. On Wednesday, he plans to sign the $280 billion PACT bill, which provides health care and benefits for veterans exposed to toxins during the war. Lawmakers are poised to win an even bigger Democratic victory if the House of Representatives approves the $700 billion Inflation Reduction Act, climate investment and prescription drug reform package passed by the Senate on Sunday.

The legislative whirlwind, a strong jobs report, and a successful counterterrorism mission that killed the leader of al-Qaeda offer Biden and the Democrats an opportunity this fall to show voters that, despite their slim majorities in the Congress have achieved a lot.

“For all the divisions in our country, we have shown ourselves and the world that we can take on the greatest challenges,” Biden said after ticking off recent legislative wins. “That’s why I’m confident that decades from now, people will be looking back at this week, with everything we’ve happened and everything we’ve brought forward, that we’ve hit the moment at this turning point in history.”

The CHIPS and Science Act, which first passed the Senate in June 2021 but lingered in the House for months, finally passed with bipartisan approval after lawmakers spent more than a year trying to align versions of the bill from the two chambers bring.

Despite the bill’s slow legislative process — and a threat by Senate Republicans to scuttle it altogether if Democrats attempted to pass a big budget spending bill using the budget voting process, which requires only 50 votes — lawmakers have made up their minds on both sides of the aisle long agreed on the importance of revitalizing America’s tech sector.

Only 10% of the world’s semiconductors, critical to making automobiles, appliances and even defense systems, are currently made in the US, with East Asia producing 75% of the world’s supply.

The new law provides $39 billion in manufacturing stimulus for U.S. companies and $10 billion in investments to boost regional economic development in technology hubs across the country.

“We’re showing the world that America can get things done in a bipartisan way when it matters most,” said Secretary of Commerce Gina Raimondo. “It couldn’t have come at a more urgent time,” she added. “Our over-reliance on foreign manufacturers is a real liability. But this will change.”

House Speaker Nancy Pelosi (D-San Francisco) commended Biden and Senate Majority Leader Charles E. Schumer (DN.Y.) for their work on the legislation, stating that because of their “groundbreaking investments” in Science and Technology “America is better equipped than ever to fight for and win the 21st century.”

One development that threatens to divert attention from Tuesday’s signing of the law — and Biden’s winning streak — is the political and legal fallout from Monday’s FBI raid on former President Trump’s Mar-a-Lago estate, which immediately triggered the TV news coverage has dominated and is having a major impact on an already polarized nation.

When the signing ceremony began, none of the major cable news networks broadcast it live, instead sticking to panel discussions about the Trump crackdown. But CNN and MSNBC cut live to the White House as Biden took the lectern.