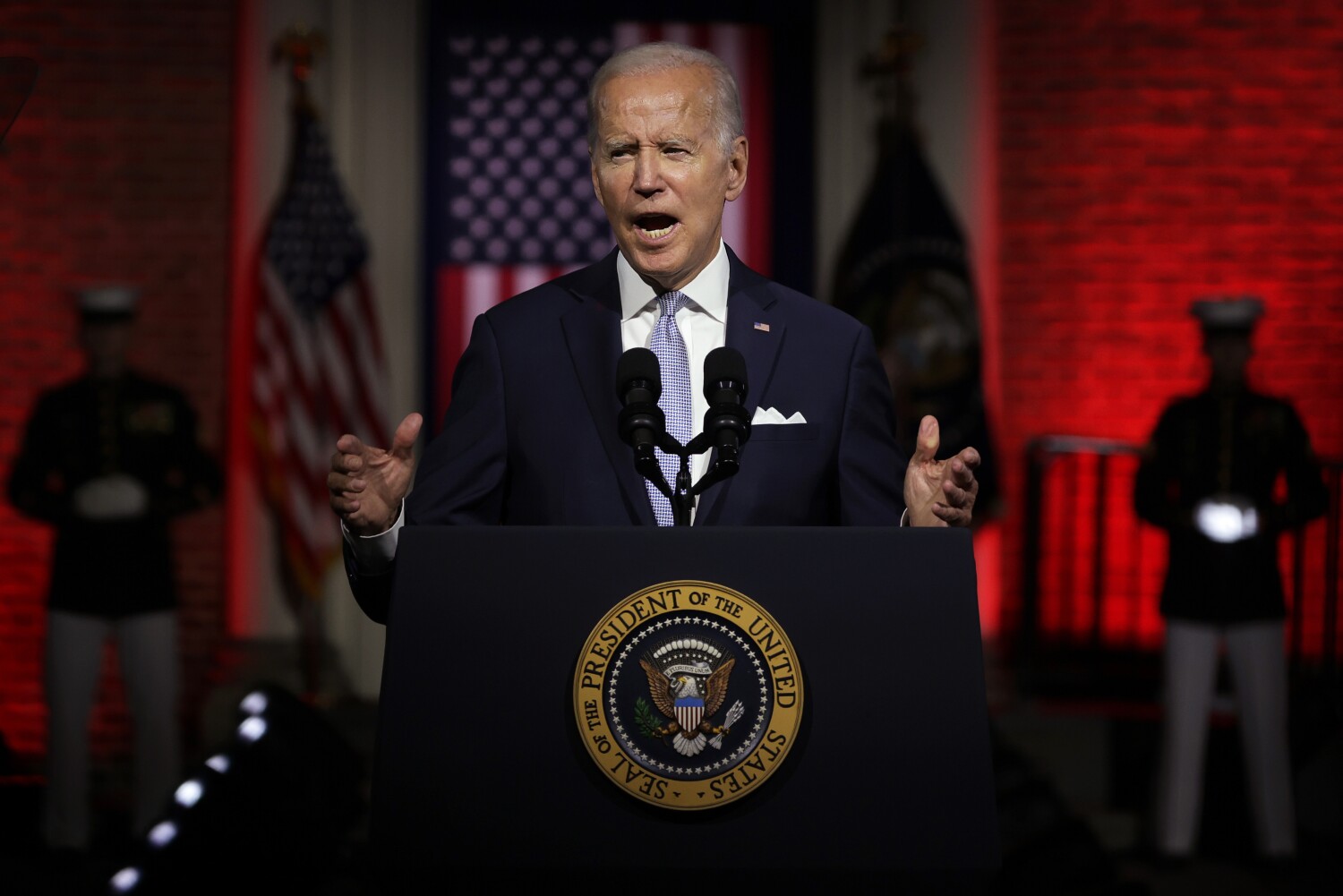 President Biden issued an urgent appeal to the country Thursday night, in which he assured in a prime-time speech that American democracy remained in grave danger and bluntly singled out the person he sees as the greatest threat to the system: the former President Trump.

Speaking at Independence Hall, where the United States’ experiment in self-government began 246 years ago, Biden sought to win over a divided public to the nation’s core principles. At the same time, he accused the Republicans most loyal to Trump of abandoning those principles and undermining Americans’ trust in the democratic process and the judicial system.

“Too much of what is happening in our country today is not normal,” Biden said. “Donald Trump and these MAGA Republicans represent an extremism that threatens the very foundations of our republic.”

In an attempt to differentiate between more mainstream Republicans and those more closely associated with Trump and his Make America Great Again, or MAGA, political movement, Biden said, “MAGA forces are determined to lead this country backwards …to an America where there is no right to vote, no right to privacy, no right to contraception, no right to marry who you love.”

Though Biden’s speech was largely a sermon on the toxic effects of political polarization, it was also a 24-minute heavy political bombardment. Like his law and order speech Tuesday in Wilkes-Barre, Pa., Biden’s impassioned remarks were an attempt to convince voters that the Republican Party is extreme. By focusing voters on Trump and his most ardent supporters in Washington, the president sought to frame November’s midterm elections, which will determine whether Democrats retain control of Congress, as a choice between two diametrically opposed political parties, rather than a referendum on To shape Biden’s first two years in office.

“We’re still a democracy at our core,” Biden said. “Yet history teaches us that blind loyalty to a single leader and a willingness to engage in political violence are fatal to a democracy. We have long assured ourselves that American democracy is guaranteed. But it is not. We have to defend it.”

The issue of democracy itself, long considered a political dud despite threatening the nation, has become a top issue for voters. Dramatic congressional hearings on the Jan. 6, 2021 insurgency and the Justice Department probe into Trump’s apparent refusal to return classified documents have dominated the news and caught Americans’ attention lately. In fact, an NBC News poll last week showed that “threats to democracy” were ranked as the top issue for voters.

“We are not powerless against these threats. We are not bystanders in this ongoing assault on democracy,” Biden said. “There are many more Americans … who reject extreme MAGA ideology than those who accept it.”

The Justice Department investigation into Trump has highlighted just how far some GOP lawmakers will go in defending the former president. Trump loyalists in Congress have sought to downplay his alleged violations of the Presidential Records Act and the possible obstruction of the investigation itself. Some have suggested removing funding from the FBI, which conducted the search of Trump’s Mar-a-Lago estate. And Sen. Lindsey Graham (RS.C) even warned that the administration that eventually impeached Trump would lead to “riots in the streets” – a scenario not too difficult to imagine less than two years after a Trump -loving mob has made its way to the Capitol.

On Thursday, during a radio interview, Trump claimed that he was providing financial support to some Capitol insurgents and said he would “seek very strongly for a full pardon” if he were to become president again. The former president makes no apologies for instigating a riot that directly hit America’s democratic process and killed several people. The US government, Trump said on Thursday, should apologize to the rioters.

Biden, his presidency revived after a string of victories in late summer, has stepped up his attacks on Republicans as the campaign’s final two-month sprint nears, blasting “MAGA Republicans” for flinging their allegiance to Trump Basic Democratic Principles and Description Turn to violent threats and absolutism as “semi-fascism.”

Wanting to forestall Biden’s comments, House Minority Leader Kevin McCarthy (R-Bakersfield) delivered his own speech in the president’s hometown of Scranton, about 125 miles north of Philadelphia, and urged him to “speak for the defamation of tens of millions Americans” as ‘fascists’.”

McCarthy, who wants to become speaker when Republicans take the House in November, suggested life would be better for Americans under a GOP majority and attacked Biden and the Democrats over immigration and over COVID-19 restrictions, while attempting to turn the President’s criticisms against him.

McCarthy vowed to use the majority regulator to probe the Biden administration should Republicans control the House of Representatives and stuck to the GOP party line, hinting in a series of messages on his social media that the FBI investigation into Trump is purely political – even after Trump platform admitted to possessing sensitive material belonging to the government.

“Joe Biden often says that our democracy is under threat. He’s right, but not for the reason he thinks,” McCarthy said. “Joe Biden and a politicized DOJ raided the home of his main political rival, Donald Trump. This is an attack on democracy.”

57 Best Gifts for Boyfriends in 2022: Stylish Gift Ideas for Every Type of Boyfriend (Including Yours)