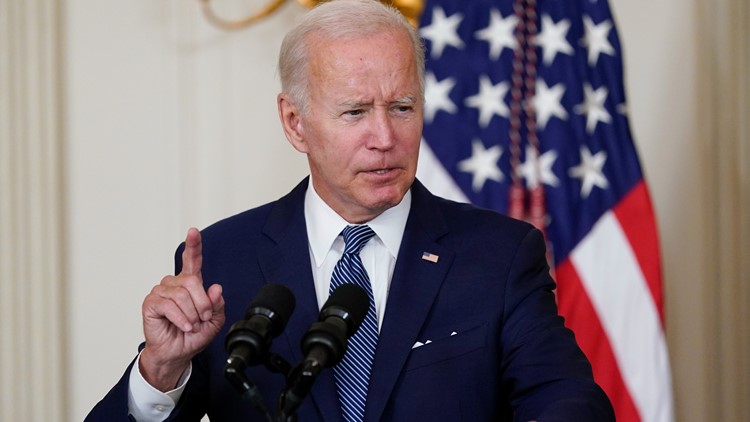 Biden will deliver a keynote address at the summit aimed at supporting organizations and individuals working to halt the rising number of extremist attacks.

WASHINGTON — President Joe Biden will host a White House summit next month aimed at tackling a surge of hateful violence across the United States as he works to fulfill his campaign promise to “heal the soul of the nation.”

The White House announced Friday that Biden will host the United We Stand summit on Sept. 15, highlighting the “destructive impact” of violence on public safety and democracy. Supporters urged Biden to hold the event after the killing of 10 black people at a convenience store in Buffalo, New York in May, also to address a spate of hate-fueled violence in cities including El Paso, Texas, Pittsburgh and Oak Creek, Wisconsin.

“As President Biden said after the horrific mass shooting earlier this year in Buffalo, we must all stand up for this great American cause in the fight for the soul of our nation,” spokeswoman Karine Jean-Pierre said in a statement. “The United We Stand Summit will provide an important opportunity for Americans of all races, religions, regions, political affiliations and walks of life to address this cause together.”

Biden will deliver a keynote speech at the gathering, which the White House said will be attended by civil rights groups, faith leaders, business leaders, law enforcement agencies, gun violence prevention advocates, former members of violent hate groups, victims of extremist violence and cultural figures. The White House emphasized that it also intends to bring together federal, state and local Democrats and Republicans and political leaders to unite against hate-motivated violence.

Biden, a Democrat, has frequently cited the 2017 white supremacist protest in Charlottesville, Virginia, when he pulled him out of political retirement to challenge then-President Donald Trump in 2020. He vowed during this campaign to work to bridge political and social divides and promote national unity, but fulfilling that cause remains a work in progress.

Sindy Benavides, CEO of the League of United Latin American Citizens, said the summit took place after the Buffalo massacre, when her organization, along with the Anti-Defamation League, the National Action Network, and other groups, wanted to urge the Biden administration to be more direct countering extremist threats.

“As civil rights organizations and social justice organizations, we fight this every day, and we wanted to make sure that government had to play a leading role in fighting the far-right,” she said.

The White House did not outline the lineup of speakers or attendees, saying it was getting closer to the event. There would also be no preview of specific Biden policy announcements. Officials noted that last year Biden signed the COVID-19 hate crimes law and released the country’s first national strategy to counter domestic terrorism.

Benavides said Biden’s holding of the summit would help push the country to address the threat of hate-inspired violence, but also said she hoped “long-term solutions” would emerge from the summit.

“What we care about is mental health, gun control reform, fighting misinformation, disinformation and misinformation,” she said. “We want policymakers to focus on common sense solutions so we don’t see this type of violence in our communities. And we want measures to reduce violence to be implemented.”

Moving from California to Nashville

NBC ‘Days of Our Lives’ Spoilers For July 25: Ava And Jake Make Big Plans, Nicole’s In Danger, And Kristen Has A Request