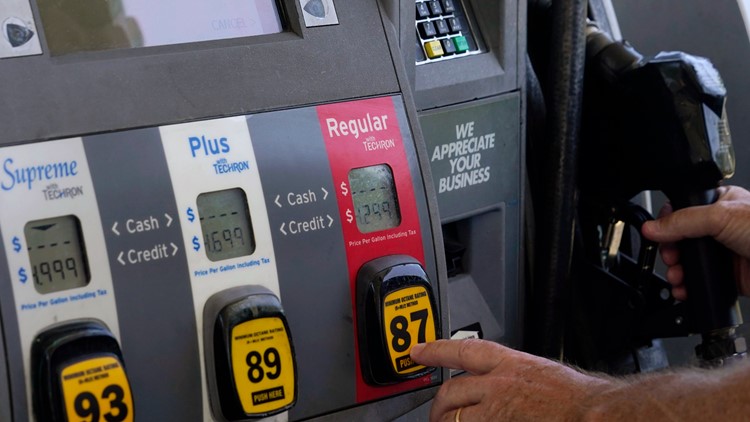 It depends on a few different factors.

If the savings from the federal gasoline tax of 18.4 cents per gallon were passed on in full to consumers, drivers would save about $2.76 on a 15-gallon tank of fuel.

But it’s unclear if Biden can get his proposal through Congress, where lawmakers, including some Democrats, are skeptical or even opposed to the idea. Many economists are also wary of a gas tax exemption.

RELATED: These five US states will have their own gas tax “holidays” in 2022

A look at how the proposed gas tax holiday would work and what impact it could have on gas prices and a highway trust fund paid for in large part by taxes on gasoline and diesel fuel.

How much money would motorists save?

It’s unclear exactly how much drivers would save; much depends on states cutting or suspending their own gas taxes, as Biden has suggested. But it’s not clear how many would do so.

There is also the question of whether the full savings would be passed on to drivers.

However, recent studies suggest that a gas tax exemption would result in lower prices.

However, the price cuts did not last throughout the tax holiday, and prices rose once the holiday was lifted, the report said.

Why is Biden proposing a gas tax holiday?

The price of gas has risen dramatically around the world – and by nearly $2 a gallon in the United States – since Russian President Vladimir Putin began rallying troops on the border with Ukraine. Soaring gas prices pose a fundamental threat to Biden’s political and policy ambitions. They have eroded confidence in the economy, contributed to record inflation, and contributed to the daunting challenges Democrats face in gaining control of the to retain the House of Representatives and the Senate in November.

Biden’s previous efforts to slash gas prices — including releasing oil from the U.S. Strategic Reserve and increasing ethanol blending this summer — have translated into little savings at the pump. Biden says the gas tax holiday can offer some direct relief to consumers, and he’s urging states to follow suit by suspending their own gas taxes or helping consumers in other ways.

“I’m doing my part. I want Congress, the states, and industry to do their part, too,” he said in a White House speech.

How much would it cost?

The government says the three-month hiatus would cost about $10 billion. The lost revenue would otherwise go to the Highway Trust Fund, which funds most of the federal government’s highway and mass transit spending.

Critics of the tax holiday say it could result in reduced spending on roads, bridges and other infrastructure that have been the hallmark of the Biden presidency. But the White House says the money could be wired from other government accounts and that infrastructure remains a top priority for the president.

If the furlough is extended, as some experts expect, the cost could be tens of billions more, jeopardizing the administration’s efforts to build and maintain roads and bridges.

Even a temporary gas tax exemption “sets a bad precedent and undermines the funding mechanism in the Infrastructure Investment Act, which was the political achievement of the Biden presidency,” said Dave Bauer, president and CEO of the American Road & Transportation Builders Association.

What does Congress say?

Legislators from both parties have expressed skepticism or even open opposition.

House Speaker Nancy Pelosi said lawmakers will “see where the consensus lies on the way forward” for Biden’s plan, but she and other congressional Democrats have long feared the gas tax suspension would allow oil companies to generate additional profits without guaranteeing that the savings will be passed on to consumers.

Rep. Peter DeFazio, D-Ore., chairman of the House Transportation and Infrastructure Committee, said he opposes the tax stay in part because it provides tiny relief and could become permanent. “You know what’s happening in this town: you suspend the tax, it’s gone forever,” he said Wednesday. “I don’t want to jeopardize the Highway Trust Fund. We haven’t increased the gas tax since 1993, and it’s now worth 6 cents compared to 1993. No, I’m not in any way supporting the reduction of this contribution to rebuilding our crumbling infrastructure.”

Republican Senate leader Mitch McConnell, meanwhile, derided the gas tax holiday as an “ineffective stunt,” while Rep. Cathy McMorris Rodgers R-Wash. called it a “political patch” that would do little to lower costs at the pump.

The plan could also have long-term implications for road safety and improvements by diverting funds from infrastructure projects across the country, added McMorris Rodgers, the top Republican on the House Energy and Commerce Committee. “Under President Biden’s proposal, people will be forced to drive on unsafe, potholed roads to get the gas they can’t afford,” she said.

House Majority Leader Steny Hoyer, D-Md., said he’s not sure Democrats have the votes to pass it. “We haven’t counted, so we don’t know yet.”

What do experts say?

Marc Goldwein, a senior policy director on the bipartisan committee on federal budget stewardship, said the gas tax exemption would not dampen inflation or bring big savings at the pump. He also feared it might not be temporary, as the White House had suggested.

“Do we really think gas prices will go down in three months? Will we raise the prices shortly before the election?” Goldwein asked in an interview. A long-term suspension of the gas tax would be disastrous for the administration’s efforts to build and maintain roads and bridges, he said.

But Mark Zandi, chief economist at Moody’s Analytics, said high gas prices are “the number one financial concern for many American households,” particularly those on low incomes. A gas tax holiday, while small, is “a step to help those households,” Zandi said. “They are under a lot of pressure because of the high gas prices. And that’s supposed to be a temporary fix. I mean, it’s pretty obvious why the administration is focused on that.”

Still, Zandi said the plan was “not a slam-dunk solution. It’s on the edge.”