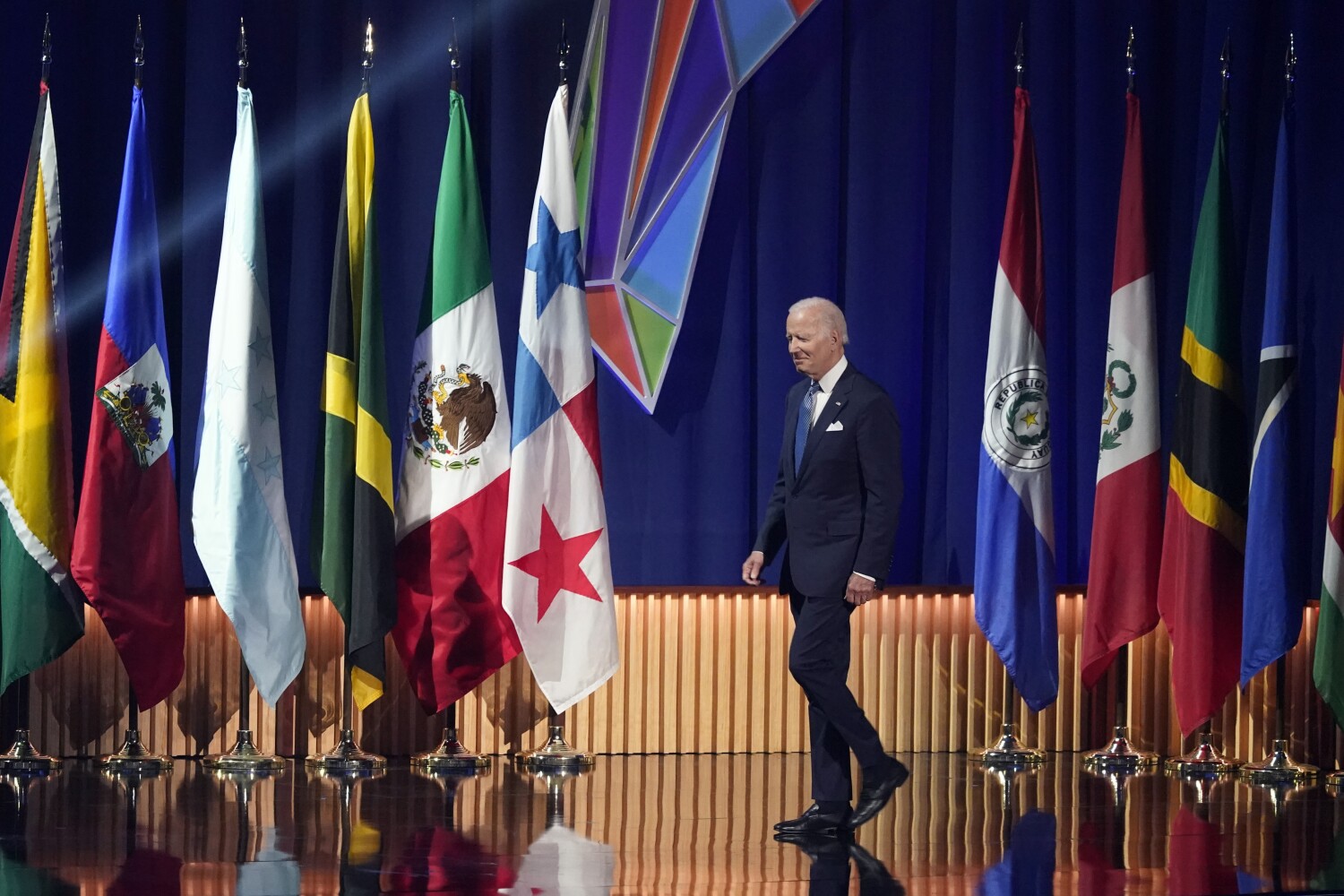 A year ago, in his first meetings with the leaders of the Group of Seven and NATO, President Biden vowed that “America is back” and promised the world’s other industrialized democracies that they could once again rely on the US to forge alliances and… to support the global order.

In response to Russia’s invasion of Ukraine in late February, Biden led a revived transatlantic alliance that has made major efforts to punish President Vladimir Putin and provide tens of billions of dollars in aid to Ukraine, often despite narrower national interests.

Beyond Ukraine, however, Biden is struggling to live up to his lofty rhetoric and promise of revived multilateralism. Paralyzed by record inflation and domestic politics, he has been forced to confront a geopolitical reality more complicated than the President often suggests when dividing the world into democracies and autocracies.

The global COVID-19 immunization program that the US has vowed to lead has fallen short; Trade talks during Biden’s recent visit to Asia yielded little progress; and the president’s decision to bar the leaders of countries deemed anti-democratic from a major summit in Los Angeles this week led to an embarrassing boycott by the Mexican president.

“Biden has this view: Let’s just put Democratic paint on everything and it will do better,” said Ian Bremmer, the president of Eurasia Group, a global risk assessment firm in New York. “There is a great willingness to engage in performative diplomacy for the sake of performative diplomacy. It’s not pointless, but it doesn’t solve any real problems.”

Even as Russia’s atrocities have forced major European allies to step up defense programs and reduce their reliance on Russian oil and gas, other key partners like India and Turkey have not been willing to sever ties with Moscow. And while Biden’s renewed focus on diplomacy has helped keep key US allies — Japan and South Korea, Israel and Saudi Arabia — long at odds with one another for improved relations, smaller developing countries are increasingly realizing their dependence on the US and other world powers in question.

“The divide between the rich and the developing world is in some ways the most important foreign policy divide emerging,” Bremmer continued. “These countries just don’t see their interests aligned with the richer countries.”

In a year marred by a global inflationary crisis that has forced leaders in Washington and other capitals to cut spending, the US and other key allies are struggling to adequately fund, or even launch, several ambitious ventures .

The US has committed more than a third of the $11 billion to the World Health Organization’s global COVID-19 immunization program — a commitment smaller than other major contributors relative to the size of its economy. “The Americans are below average,” said Bremmer.

Last month’s five-day trip to Asia yielded little beyond photo ops and loose commitments to eventually pursuing a new Indo-Pacific trade deal that no country appears to be seriously pursuing. And last week’s Summit of the Americas, hosted by the US in Los Angeles, was an exercise in futility largely determined by who failed to show up and what failed to achieve as the region grapples with a migrant crisis and a pandemic is economic devastation.

A migration pact signed by Biden and Latin American leaders, described by Biden officials as the summit’s greatest achievement, included new US humanitarian funds, but most importantly touted already ongoing efforts to manage migration. Several key leaders from nations that produce the most migrants were also absent from the event due to a boycott over the Biden administration’s decision to exclude leaders it considers anti-democratic (from Cuba, Nicaragua and Venezuela).

Similarly, the virtual “democracy summit” that Biden called last December was criticized by human rights defenders because the government invited some nations allegedly involved in human rights abuses but not others. The event also forced the President to admit that America’s ability to promote democratic values ​​had been weakened by the January 6 uprising by a pro-Trump mob trying to prevent the peaceful transfer of power.

Biden’s worldview — a global clash between democracies and autocracies — and his desire to organize as broad a coalition as possible to constrain China have also constrained his foreign policy goals, according to Bruce Jones, director of the Project on International Order and Strategy at the Brookings institution in Washington.

Organizing allies to confront China and mobilize to defend democracy “are actually in tension with each other on the world stage, and they haven’t reconciled that,” Jones said.

Not only is it not a universal worldview, but the US needs the cooperation of some non-democracies to help on a range of issues, he added.

Despite Biden’s best efforts to reiterate that democratic values ​​remain sacrosanct, other interests may still prevail. Case in point: after more than three years of convicting the crown prince of Saudi Arabia for running a “rogue state” following the gruesome murder of journalist Jamal Khashoggi, Biden plans to travel to Riyadh next month to re-establish ties with the regime revitalize The President wants Saudi Arabia to pump more oil to help stabilize global energy markets. US gas prices have risen sharply over the last year, particularly after Russia invaded Ukraine.

“The government’s record on alliances is strong in Europe and weak everywhere else,” said Kori Schake, a foreign policy expert at the American Enterprise Institute, who served on President George W. Bush’s National Security Council and as an adviser to Senator John McCain on the 2008 presidential campaigner (she also supported Biden in 2020).

“Asian countries are pleading for a trade deal and the government is making them vague promises without much substance,” she continued. “And the constant talk about democracies being better than autocracies alienates some of the countries he needs to implement a broader strategy. That stands in their way of bringing about the deeper kind of alliance cooperation outside of Europe that they say is their priority.”

At last summer’s G-7 summits, Biden and other leaders led a spectacular launch of Build Back Better World, a proposed infrastructure bank. It was designed to offer developing countries an alternative to China’s Belt and Road Initiative to obtain financing for upgrading roads, bridges and railways.

US officials and analysts said at the time that such an initiative could prove particularly effective in curbing China’s encroachment into the western hemisphere. But the US made little headway on the initiative, so much so that it warranted no mention of Biden or other US leaders speaking at the Americas Summit. A US official speaking ahead of the summit said the initiative will be “formally launched” at this year’s G-7 summits and Biden still plans to discuss it in private meetings with Latin American leaders.

“It’s a terrible idea to convene a summit when there’s no common definition of success. And here there is no immigration policy, nothing on infrastructure, no big trade proposal,” said Richard Haass, the president of the Council on Foreign Relations. “If we don’t want these other countries to go in the direction of China or Russia, we have to offer something, but it looks like we’re over-promising and not delivering.”

The upcoming G-7 and NATO summits, to be held later this month in Germany and Spain respectively, will largely focus on the ongoing war in eastern Ukraine and ensure the alliance holds together. The NATO summit in particular is likely to be historic as Finland and Sweden are likely to join the defense pact after decades of strategic neutrality. The move reflects how Putin’s invasion of Ukraine changed security considerations across Europe and strengthened the alliance he wanted to test.

Despite transatlantic unity, Russia’s war continues to ravage eastern Ukraine and its outcome remains uncertain. The Western triumphalism of the conflict’s first months may fade as the US and its allies grapple with the war’s impact on inflation, food and energy supplies, and the polls of their leaders. Americans, early on captivated by live coverage of the conflict, are paying less attention and focusing more on high gas prices, a shortage of infant formula and the recent mass shootings — issues on which Biden and Democrats are focused in light of the focus Fast approaching midterm elections will increasingly focus energy as well.

“Even though we know how much is at stake, we could lose focus because of all the domestic political challenges,” said Constanze Stelzenmuller, expert on European security issues at the Brookings Institution. “We have limits and limitations on the power and costs we are willing to impose on our own citizens, and Putin does not. We have a democratic handicap from which Putin is completely free.”

In short, the president’s primary foreign policy achievement may not be tenable.

Justin Bieber Reveals Half His Face Is Paralyzed!!