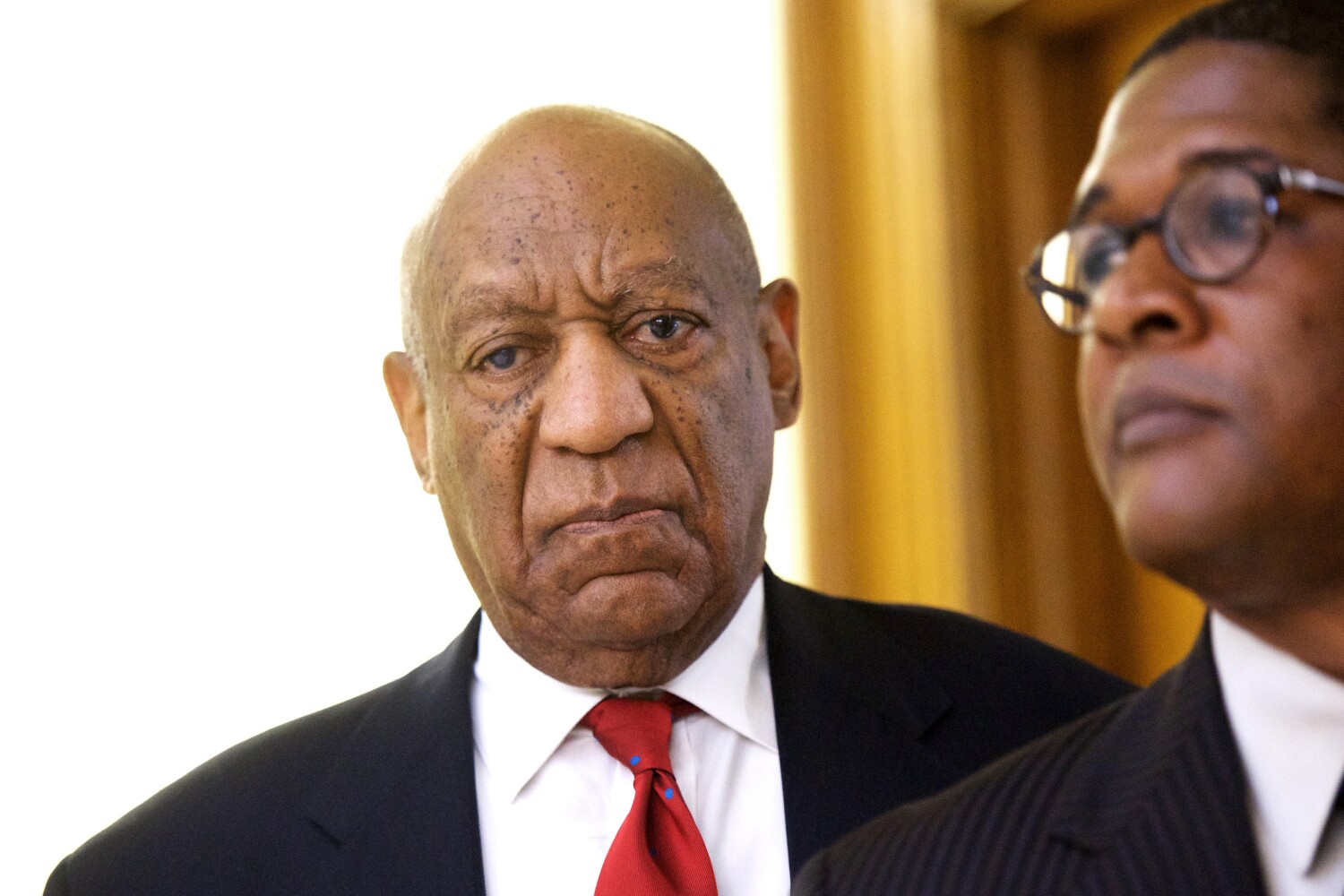 Lawyers for Bill Cosby and Judy Huth issued closing statements Wednesday in the latest sexual assault trial against the disgraced actor and comedian.

Huth, a 64-year-old California resident who accused Cosby of sexually abusing her as a teenager at the Playboy Mansion, recalled the alleged assault in detail last week during the civil trial taking place this month in Santa Monica.

Through video testimony taken in October 2015 and shown to the jury last week, Cosby denied Huth’s allegations, claiming he had no memory of meeting her in the mid-1970s when the incident allegedly happened.

The jury entered the courtroom around 10 a.m. Wednesday, after which Judge Craig D. Karlan apologized for a 30-minute delay caused by a power outage at the courthouse that morning.

Before the closing arguments began, the jury was played a video testimony of the late Playboy magazine founder Hugh Hefner. In the 2016 footage, Hefner described the configurations of playrooms and adjoining bedrooms at the Playboy Mansion. (Cosby reportedly attacked Huth in one of the bedrooms next to the playrooms that Hefner spoke of.)

When asked if visitors to the Playboy Mansion would be allowed to engage in sexual activity in the rooms, Hefner said, “It very much depends on the circumstances.” He added that it was “unusual” to have underage guests in the mansion, but “there were exceptions” when parents were present.

Hefner said in his testimony that Cosby was not allowed to bring underage girls into the Playboy Mansion and that he never realized it. However, he could not say whether mansion staff routinely checked visitors’ IDs to determine their ages upon entering or when serving alcoholic beverages. When asked if the villa’s security team normally checks guests’ IDs, Hefner replied, “I think so, but I didn’t really know.”

At the mansion, Hefner said, Cosby was treated like everyone else and had “no special privileges.” He identified Cosby as one of his closest friends in the mid-1970s and had no recollection of speaking to the TV star about bringing underage girls into the villa.

After Hefner’s video testimony was complete, prosecutors began their closing arguments at approximately 10:15 a.m. While speaking before the jury, Huth’s attorney, Nathan Goldberg, carefully summarized and commented on each witness’ testimony, often referring to evidence and testimonies displayed on a courtroom screen.

He argued that Huth was not only a victim of sexual assault but also of pervasive blame.

“If we’ve learned one thing… [it’s] how much courage it takes … to bring such a lawsuit against someone like Mr. Cosby — a celebrity, powerful,” Goldberg said.

Goldberg considered Huth’s testimony in detail and reminded the jury that a teenage Huth and her 17-year-old friend Donna Samuelson allegedly shared their ages with Cosby before he served them drinks and invited them to the Playboy Mansion. After the attack allegedly took place, Goldberg said, “Cosby acted like nothing happened” and Huth “was afraid to say anything” in his presence.

A photo appeared on the screen that the jury had seen several times before – of Cosby and Huth together at the Playboy Mansion. Goldberg also referenced statements by Samuelson, who testified that a distraught Huth asked her to leave the Playboy mansion after Cosby allegedly assaulted her.

“Why on earth would she want to leave if nothing happened?” Goldberg asked the jury. “Of course that’s why.”

Goldberg also dismissed the defense’s argument that Huth’s allegations were part of an elaborate “conspiracy” hatched by her and Samuelson. He characterized the defense’s strategy as “small sniper attacks that mean nothing.”

To support his argument, he shared the stories of other Cosby accusers to create a “collective plan — get the victim to a specific location and then exploit.”

Cosby’s attorney, Jennifer Bonjean, interrupted Goldberg’s speech more than 10 times to raise objections – the vast majority of which were overruled by Karlan.

“Ultimately, the jury has to decide what the facts are,” Karlan told Bonjean after overriding one of several objections she had raised.

Towards the end of his closing statement — which lasted nearly an hour and a half — Goldberg detailed the psychological toll the alleged attack was taking on Huth, as well as the traumatic but empowering effect other accusers’ stories had on them.

“Cosby was sentenced to prison [in 2018], and that changed things for her,” Goldberg said. “She was relieved. … Now the world knew.”

Ultimately, Goldberg implored the jury to “use your best judgment, use your common sense” and “decide what is right.”

“To be fair in this case, you need to make sure you hold Mr. Cosby fully accountable for the damage he caused,” Goldberg said.

After a court break, the defense is scheduled to deliver its closing arguments at around 1:30 p.m.

Throughout the trial, much of the defense’s case focused on the timing of Huth’s allegations. Originally, the Riverside County plaintiff claimed the attack occurred in 1974 when she was 15 years old. But she has since changed her account to say it happened in 1975 when she was 16 years old.

In court, Huth explained that she changed the date of her story after reviewing images and media materials from the time that suggest the attack happened a year after she originally believed it.

Team Cosby has also investigated the 40-year gap between the alleged attack and the date Huth filed her lawsuit against the former “Cosby Show” star in December 2014.

While testifying in court earlier this month, Huth recalled meeting Cosby in the mid-1970s. She said Cosby gave her and a friend, Samuelson, drinks before taking them to the Playboy Mansion in LA and instructing them to tell people they were 19 if asked.

When Samuelson took the stand last Monday, the defense challenged previous statements it had made about playing the Donkey Kong video game that night in a room next to the bedroom where Cosby allegedly assaulted Huth.

During cross-examination, Bonjean pointed out that “Donkey Kong” was not released until six years after the alleged attack. (Since Huth also referenced Samuelson playing “Donkey Kong,” Team Cosby attempted to use the error as evidence that the duo made up a fake story together.)

Samuelson said she simply misremembered the video game’s name and reasoned that it “could have been Atari”.

In her lawsuit, Huth alleged that the alleged assault caused her psychological distress in the form of anxiety attacks and flashbacks that began in 2014 and lasted through 2018 — when Cosby was convicted of an unrelated sexual assault case and sent to a Pennsylvania jail.

(Cosby was released from prison in June 2021 after that decision was overturned under a “non-prosecution” agreement the entertainer struck with a former prosecutor in 2014.)

During the trial, two photographs taken by Samuelson of Cosby with Huth at the Playboy Mansion were repeatedly presented to the jury. Although Bonjean has admitted that Cosby brought Samuelson and Huth into the villa, the comedian’s reps have claimed that nothing sexual happened.

Over the years, Cosby has consistently denied allegations of rape, sexual assault and other crimes by about 60 women. The 84-year-old actor is not expected to take part in this process.

The deliberations of the jury are to begin after the conclusion of the closing statements. Huth is seeking unspecified damages, and since this is a civil trial, not a criminal trial, Cosby will not return to prison even if found guilty.

Why mystery-comedy ‘Only Murders’ had Nathan Lane go dark