On a cold and rainy night in Newark, New Jersey, BLACKPINK fans (better known as BLINKS) turned out in their best attire. Crowds entered the arena in their pink down jackets and black sequined skirts, mimicking the girl group’s iconic merch: a glowstick shaped into a pink heart-shaped hammer. Even before the concert began, fans were waving their BI-ping bongs with energetic passion to the beat of their music videos, which were playing on the big screens next to the stage. The exuberant energy was primed for BLACKPINK’s performance and the moment they took the stage they absolutely delivered.

It was the third time Jisoo, Jennie, Rosé and Lisa graced the Prudential Center stage this year. The first time out, they released their long-awaited comeback single “Pink Venom” and performed the song back in August at the 2022 MTV Video Music Awards, and the group walked away from the awards victorious with many premieres. They were the first all-female K-pop group to perform, Lisa was the first K-pop solo act to win Best K-pop Performance, and the group was the first to win the Best K-Pop Award Metaverse performance won Blackpink The Virtual – PUB. On day one of their two-day Born Pink World Tour stop in Newark, the girls admitted they were shy and nervous about taking the stage after not touring for three years. However, on the second day, they upped the energy to give their fans their all. 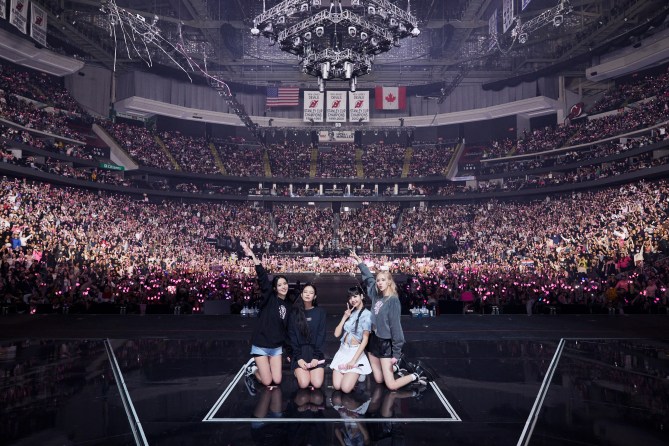 The quartet confidently strutted across the stage to the first song “How You Like That” from their debut studio album The album. Their savagery never stopped as they progressed to “Pretty Savage” with their signature unwavering and seamless choreography. When it came to introducing themselves, they were thrilled to put on a great show. “Yesterday was intense, but today I feel completely overwhelmed,” Rosé said of the crowd.

During the first half of the concert, the group performed back-to-back hits like “Lovesick Girls,” “Kill This Love,” “Crazy for You,” and “Playing with Fire,” all of which they performed with the same carefree feelings portrayed in the songs kept but a bold intensity at. They started off with the sentimental “Tally” from their latest album born pink, which still maintains the strong girl feelings with the lyrics, “Yeah, I say ‘f—k it’ when I feel it / ‘Cause no one’s keep tally, I do what I want with you I like.” The members were also joined by groovy live band The Band Six (who also played with YG Entertainment’s labelmates Big Bang) and their dedicated backup dancers for their latest hit single, Pink Venom. Amid their lively performances, the quartet wasn’t afraid to show appreciation when it was due. BLACKPINK made sure to keep mentioning the hard work and love shown throughout the show by the people who constantly support them.

After presenting the stunning songs from their new album, each member demonstrated their skills on their solo stages. Jennie kicked off by singing her single “Moonlight” and graced the stage with an elegant balance of flirtation, royalty and mystery. Next came Rosé, who sang “On the Ground” from her solo release -R- and enchanted the crowd with the versatility of the feel-good song. Lisa perfected a mashup of her incredibly viral songs “LaLisa” and “Money” by dominating the stage and showcasing decades of dance experience and flexible pole dancing. Finally, Jisoo wrapped things up by covering Camilla Cabello’s “Liar,” to cheers and applause from fans across the arena.

The girls reunited as a whole for a smooth rendition of the second single from born pink “Shut Down” and showed her personality in “Typa Girl”. During the “Ddu-Ddu-Du-Du” dance sample, they instructed their fans to point their fingers in sync with the chorus, and rest assured the crowd reflected the vibrancy BLACKPINK exuded on stage. They closed the set with their fan-favorite song “Forever Young” but returned once more for a memorable encore. The members appeared in their own merch, feeling very laid back and showing a goofy side of themselves by being absolutely bubbly and bouncy throughout the final three songs.

During the climax of “Yeah Yeah Yeah,” younger members Lisa and Rosé would piggyback on older members Jennie and Jisoo and run giggling down the extended stage, much to the delight of fans. The evening finally ended with a lot of love for the fans, who rounded it off with “Stay” and “As If It’s Your Last” to bombastic confetti work, lots of hand hearts and waves. The warmth and bond between BLACKPINK and Blinks will always remain sacred, and for two nights, the Prudential Center ablaze with pink love.

Artemis I Paves the Way Back to the Moon

Cause of death revealed for Ronnie Turner, Tina Turner’s son